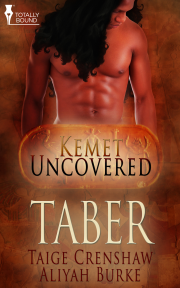 Book 5 in the Kemet Uncovered series

I am a traveller who enjoys finding new exciting places to explore. I have no real home to call my own and have never longed for a place to rest. At least until I met the woman who sets my senses on fire.

Lainey Mercer is stubborn, hard to get near and passionate. She is all that I never realised that I wanted. She has made this god wonder what could be possible with a woman by your side who matches you in everyway. I now long to put down roots and for us to create a home together. Live from now to the rest of eternity and beyond side by side. But my Lainey is a woman who will not give in…she will bring me to my knees and then rebuild me into a better god who has found—the woman he loves.

The roar of the plane engines changed, signalling they were about to land. Lainey Mercer shifted on the seat, holding onto the straps keeping her in as the cargo plane descended to their new home.

"We’re almost there, Kali." Lainey glanced towards the back of the plane.

Although she knew the Eurasian lynx was sedated, as well as too far away to hear her, she felt better saying it. She breathed out. The last few weeks had been a rollercoaster getting herself and Kali ready for this trip. She didn’t care about herself, but after the sanctuary she’d worked for had lost funding and had had to close, they’d had a hell of a time placing the animals. Kali was the last one—they’d especially struggled to find a new home for her. At first when she hadn’t been able to place the cat, it had hurt her she would have been parted from the lynx she’d raised from birth. For a while there, Lainey had thought she wouldn’t find anywhere for Kali to go. Thankfully, she had found her a place. Not only that but she was going with her.

"I hope this is the right thing for both of us." Lainey spoke aloud again.

She was used to talking with the animals she worked with, but she’d always favoured Kali’s company. The lynx was usually silent around her, but Lainey could tell she understood what she said. At least, that’s what she liked to believe. Lainey pushed away any doubts—this was the right place for them to be. They would be settled in no time and get into a new routine.

Except I’ll be in charge of it all. Excitement filled Lainey at the thought. She would be the one calling the shots for what happened with the animals and everything else. It was one of the big draws to the new job and why she’d accepted—it had brought her and Kali here to New Mexico. Everyone who worked with rescuing animals knew of EASAWR—Ellis Animal Sanctuaries and Wildlife Reserve. They were the biggest and best funded organisation—the dream job most people in her field wanted to get. The EASAWR was very hard to get a job with—they had a stringent screening process, yet she had managed to get a foot in the door through a friend.

She’d used this advantage to apply for a job to work with the animals. She hadn’t thought she’d have a chance and had been shocked when she’d not only got a job, but had had an offer for one she hadn’t gone after. Just because they’d offered her the opportunity to be in charge didn’t mean she was just going to accept it, though. She’d told them what she wanted to make her even consider the job. They had met all her criteria and her generous salary request. What she’d heard was true— Ellis had funds and used them make sure his reserve was well run. The cargo plane they were on was an example—she’d been told that it was owned by the Ellis Animal Sanctuaries and Wildlife Reserve. The plane was covered with the logo of the organisation and was very well equipped for the animals’ comfort. It could hold many animals and transport them where they needed to be taken. Today it was only her and the lynx. They had offered to fly her in on a private jet—also owned by Ellis—but she had turned them down, wanting to come with Kali.

"Lainey, you can deplane now," a voice said.

Lainey saw Sean Caan—who had met her and Kali at the previous sanctuary she worked at—standing before her. He looked amused.

"Thanks, Sean, but I can help you unload Kali." She unbuckled the belts and stood.

"Someone is waiting for you outside." Sean turned, then made his way back towards the animal.

Lainey wasn’t sure who could possibly be waiting on her. She lifted her backpack and headed the way Sean had gone. The hatch had already been lowered. She knelt next to the cage that held the cat. Lainey was pleased to note she was still sedated. She reached in the cage and touched her as she never would have dared if Kali had been awake. Her bright, reddish-brown coat, marked with black spots, was soft and lush. On her ears were black tufts of hair, under her neck and chin was white, while on her forehead and back there were dark brown stripes. The short, bobbed tail was the same colour as her coat, except for the all-black tip.

"She made the trip fine," Sean stated.

She glanced at him standing in front of the cage.

"Yes, she did. I want to get her to her new habitat and settled." Lainey stood, hefting her backpack in one hand.

"She’ll be there in a few minutes."

Lainey patted him on the shoulder as she passed him. During the long flight she had got to know Sean better. He hadn’t been intimidated by her being his new boss. Sean had filled her in on the various animals they had in residence. She’d heard how much he cared in his voice when he’d described what he did at the sanctuary. That boded well for them getting along, and from what he’d said, the others working at the reserve seemed to have a deep care for the creatures too. Especially Ellis. New Mexico was the newest of his many locations of the EASAWR and Mr Ellis was on site at this location. He had made this his home base. That had made Lainey unsure of taking the job—she’d dealt with bureaucratic red tape from owners of reserves too often. They wanted to be involved but had no actual clue about the day to day running of the reserve. She’d been assured that that would not be an issue here.

Aliyah Burke and Taige Crenshaw are skilled at showing all the sides of a character, so readers understand them. This is another gripping story that will draw you in and keep you hoping to see the...

Share what you thought about Taber and earn reward points.