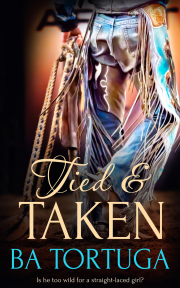 Ainsley Preacher’s gotten used to being more than Daddy’s little girl and once she gets back to the Texas rodeo circuit, her ex, Kase, intends to find out exactly what that means.

When Ainsley broke up with him a while back, bronc rider Kase just figured it was because he was too wild for that straight-laced girl. Rodeo royalty, Ainsley rarely let her hair down with the other riders, and she let way more than her hair loose with Kase. She ran far enough that Kase couldn’t catch her, but when she returns to the Texas circuit for a few events, Kase notices something new about his ex, and he has to know more.

Ainsley left because she thought Kase had done her wrong, but she’s never gotten over her feelings for him, or what he could do to her body. In fact, she got a tattoo to remember him by, one that she can’t take a chance on anyone in Texas knowing about. So when Kase tells her he wants a peek at her tattoo, and a chance to get back into her life, Ainsley has to hold firm. She doesn’t have the time to end up tied and taken again, right?

Publisher's Note: This book has previously been released as part of the Boots, Chaps and Cowboy Hats anthology with Totally Bound Publishing.

Okay, so roughing it wasn’t really rough at the KOA, where he had showers and electrical hookups and a pizza and beer with the guys. Still, he liked it better than some of the swanky host hotels at the big events. Kase wasn’t a Vegas man, though he was happy enough to place at the NFR and make money.

His cowboy heart was in the down and dirty little events around the Fourth of July, what cowboy folks called Christmas. He loved the sweat, the sun pounding down on him and the cold shock of beer on his throat after he made a good ride and had the money to buy a round.

’Course, now it was pretty late and he must have been the only roughstock rider not driving out first thing in the morning, because his buddies had all abandoned him and his well-stocked cooler.

Maybe he ought to go take advantage of that shower. With his luck, the next stopover would have a pit toilet. Even worse, the next campground would have a swimming pool near the bathroom and thirty thousand screaming kids wiping out in the communal showers. Right now he could handle some cool water, a little quiet time and enough light to check the shower stall for snakes.

Share what you thought about Tied and Taken and earn reward points.