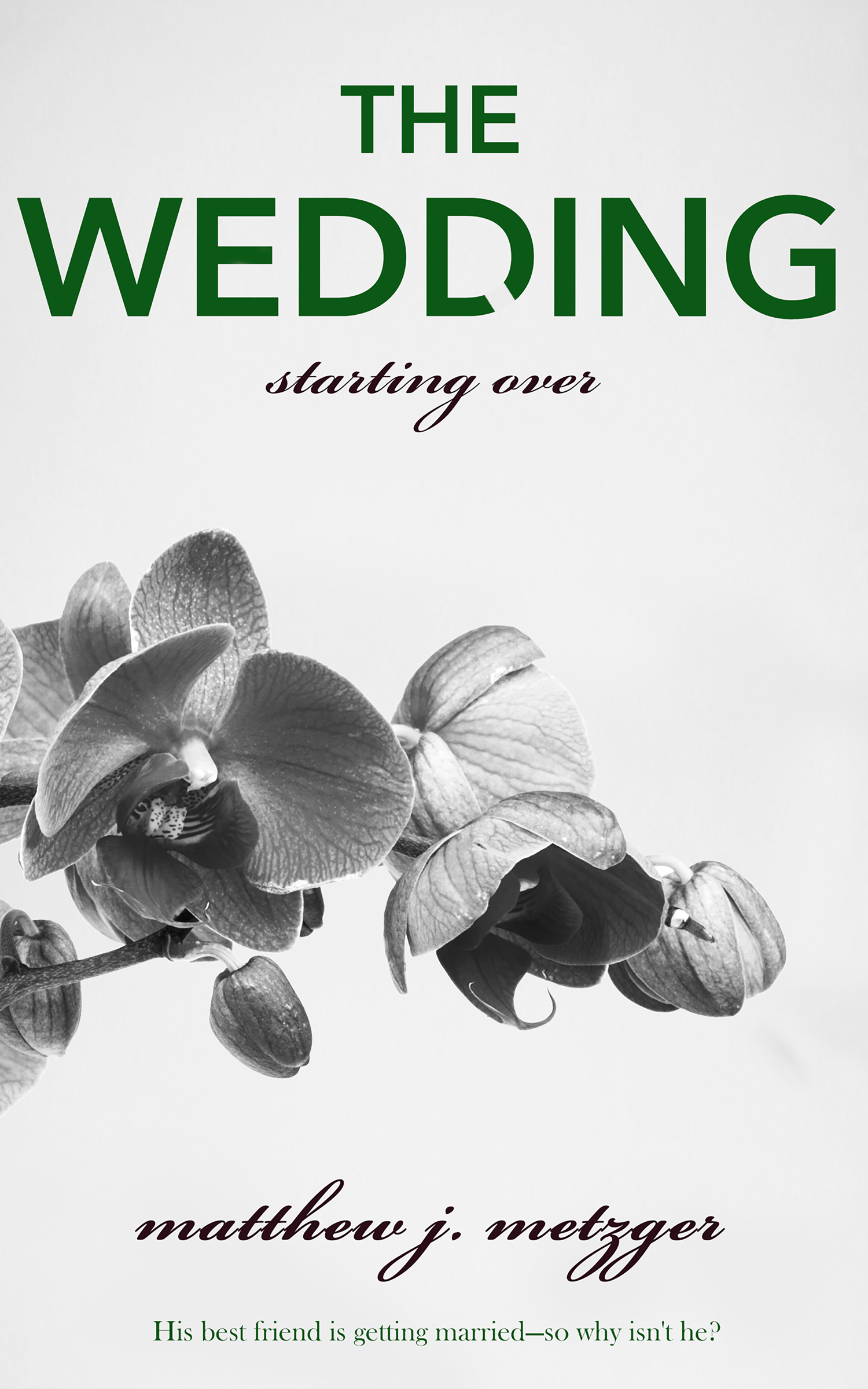 Book 3 in the Starting Over series

His best friend is getting married—so why isn’t he?

Aled’s best friend is getting married.

He supposes it’s only natural for his thoughts to turn to his own wedding, and the space on his hand where his ring used to be. He tried and failed, so what’s the point in trying again?

Anyway, Gabriel isn’t interested. Between his old friend Kevin, his live-in dominant Aled and his new boyfriend Chris, Gabriel has plenty to keep him occupied without getting involved in any of this wedding nonsense. If he’s changing to appreciate love without sex as well as sex without love, that doesn’t mean he’s any more amenable to expensive parties and silly costumes.

But Aled can’t get the question out of his head, and Gabriel can’t shake the feeling that there’s something Aled’s trying to ask him.

Is this three-year affair about to become something a little more serious?

Reader advisory: This book containsmentions of homophobia, biphobia and transphobia by multiple characters. There are references to homelessness and alcoholism as well as rough sex, extreme sex, RACK and mention of lactation kink. There is also mention of abortion.

The seatbelt sign went out and Aled’s phone went on.

Usually, Aled liked work sending him to the California office. They gave him a company credit card, paid for a nice hotel and the meal allowance was obscene. He always came back two stone heavier than when he left, and last time he’d been sent—only for a week—he’d come home to a boyfriend itching out of his skin for a good, hard fuck.

But six weeks was just taking the piss.

Six weeks of a staggering time difference, obscene heat and no sex. He felt grimy from the long flight, fat from the rich food and disconnected from his own partner. He wanted to see Gabriel. He wanted to shower. Then he wanted to completely undo the shower’s hard work and fuck Gabriel until it hurt.

Hence the immediate turn to his phone.

It started to trill as the plane reached the gate and Aled thumbed through several updates from Suze, mostly asking why the flight was so late and demanding to know if he was screwing with her and was already at home, to finally—finally—find one from Gabriel.

Tea in the microwave, see you soon :) xx

Aled frowned. Tea in the microwave? So what? They could take a takeaway or make something at ridiculous o’clock in the morning and fuck on the kitchen floor like a couple of drunk teenagers.

Landed, Aled replied, despite the hour. You all right? Have you come to meet me?

Silence. Aled fidgeted. Gabriel was probably just—just waiting or something. Playing a game on his phone. In the toilets taking the edge off before Aled got there. There were many reasons he’d not instantly reply. It wasn’t like flights were ever bang on time these days and getting through border control always took some time. He might even still be getting off the train at the airport station. It was fine.

He felt antsy anyway. He could tell himself that everything was fine all he wanted, but—but he didn’t know. Gabriel was quiet. And Suze was noisy. Something was up.

So he hurried, jostling past other passengers to get off the plane as quickly as possible, near-running along the corridor to border control, muttering obscenities at the e-gate when it rejected his passport twice, jogging to baggage control, swearing the whole time under his breath waiting for his suitcase to appear…

It paid off. He was first out of the arrivals gate, scanning the crowd for that ink-black hair and devastating smile before he’d even cleared the automatic doors. And without the crowd having gathered sufficiently, he found a familiar face with no effort whatsoever.

Only it wasn’t Gabriel.

“Welcome home!” she cheered, holding out her arms for a hug.

Aled frowned, glancing around. She was on her own. Was he waiting to jump out from behind a pillar like a daft sod or something? Was he—

Had he just not come?

Aled sighed and hugged her, before stepping back and demanding to know again.

“I bullied him into letting me come instead.”

Aled relaxed a little. Suze was a force of nature. If she’d asked to come instead, and asked enough times, then she’d have worn Gabriel down.

“Because I wanted to see you,” she said. “Anyway, he couldn’t get out of work today and was fussing about not making it on time because of your early flight, so—ta-da! Am I not enough?”

“No offence, Suze, but I was looking forward to a bit of fun and you’re not it.”

“Gross,” she drawled. “Well, I beat him in a fight, so suck it up. He’ll be at home when we get there. Or still at work if we hurry. So how was San Diego?”

Aled whinged and told her all about the fiasco as he followed her to the exit for the car parks. The timing had been shit. Gabriel had only moved in with Aled about six months ago, and they’d been gearing up to go house shopping and find somewhere more them, rather than the house Aled had originally bought with his ex-wife. Then, the day before their first house-viewing appointments, Aled had been sent to America. In corporate terms, there had been a complete disaster. The head of marketing had been caught with his hand in the till, so to speak, and was being investigated for fraud in the millions of dollars. Which left a large company with dead weight, a mutinous building full of corrupt employees and nobody to train up their replacements.

And so Aled had been parachuted out there.

He’d tried to refuse. They’d offered a bonus and a raise, but he’d not wanted to go. It had taken months for Gabriel to stop being twitchy about living together—Aled hadn’t wanted to throw their plans up in the air now they’d finally settled down.

But it had been Gabriel who’d told him to go.

‘With that money, you could pay off the mortgage,’ he’d said. ‘We can get somewhere really nice, instead of having to settle. Go. It’s not like I’ll be all on my own.’

Aled didn’t mind. They had an open relationship by mutual agreement, although Aled rarely indulged. Gabriel called him emotionally monogamous, and it was true. Aled had never really been capable of loving multiple people at once. He got too focused on one person. But sex? Sex was different. He could have sex with multiple people guilt-free, and occasionally had since meeting Gabriel almost three years ago.

But Gabriel wasn’t wired the same way. Sometimes he’d find a one-night stand on Grindr. Sometimes he’d sleep with the same man for weeks on end, then it would be over. And sometimes he had other relationships—other dates, other boyfriends, other partners. He’d been with Kevin since before he met Aled. Chris had been a regular topic of conversation for a couple of months. And Greg had been a weekly occurrence since July, although Aled could happily do without that twat within a hundred miles of him. God, the man was a knob.

But by and large, Aled didn’t mind the presence of other men in their lives. As long as they treated Gabriel right and didn’t interfere with his relationship with Aled, Aled was fine with it. The only real rule between them was honesty and Gabriel had always been unfailingly honest about his liaisons.

Still, if Gabriel had been screwing that shithead Greg in Aled’s house…

“I’m guessing,” Suze said as they reached the car, “that you want to go straight home and check up on the Archangel Gabriel?”

“I wouldn’t call him that to his face.”

“You deserved it, then.”

Aled snorted, settling into the passenger seat with a tired groan. “You did. And yes, incidentally. I’ve missed him.”

“He’s fine. He came over for Sunday dinner with us a couple of weeks ago. He’s been taking the opportunity to hit up the biking trails a bit more without you.”

“Oh my God, the conservatory floor—”

“Drama queen,” Suze said snidely as she slid into the driver’s seat. “He’s had some friend over. Craig?”

Aled subsided, mollified. Chris was all right. He’d never actually met him face-to-face, but he called fairly frequently and Gabriel had been on the odd proper date with him. They’d met at some cycling event or other. Nutters.

“We didn’t see him at all last week. He went off mountain biking in Snowdonia. Who cycles up a mountain?”

“Gabriel does,” Aled groused. “He can’t stay still for twenty seconds. I don’t tie him up for the thrill. I tie him up to keep him in one place long enough to fuck him.”

Suze laughed, peeling out of the car park and into the darkness. “Lies.”

“Complete lies, I know you better than that.” Then, oddly, her face sobered. “Um. So…he was going to come and meet you, but I asked if I could. I need to talk to you.”

There was a long silence.

Quite suddenly, she swerved over to the side of the road, and switched the hazard lights on. Aled blinked, startled, as she sat back and huffed at the steering wheel like it had offended her.

“Suze? Everything all right?”

Aled frowned. Suze never didn’t know. She was the epitome of going for it, no matter what it happened to be, and having no regrets.

“What’s up?” he prompted softly.

Aled took one of her hands off the wheel to squeeze it. “Come on, Suze,” he coaxed. “Talk to me.”

“I don’t know what to do,” she said miserably. “On the one hand, it’s everything I ever wanted, it’s exactly where I want us to be going, it’s what the end game’s been ever since I was little, but—but it means—”

She took a deep, shaking breath, and her face twisted like she was going to cry. “Tom’s proposed.”

For a moment, his brain struggled with the words. He knew what they meant. Or, rather, he knew what they should mean. Congratulations. Celebrations. Several parties, a wedding, speeches, cake, eyeing her speculatively to see if there was a possible bump under the sleek white folds of the dress—

So why did Suze look like she wanted to punch the horn?

“My instinct,” Aled said slowly, “is to congratulate you on the love of your life wanting to marry you, but you don’t look like you want to be congratulated.”

Share what you thought about The Wedding PRINT and earn reward points.