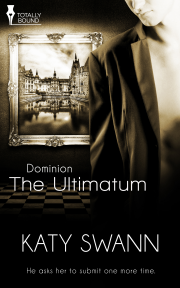 Book 1 in the Dominion series

Frankie Hamilton is stunned when her husband, Jake, gives her an ultimatum—either she goes with him to a country hotel for the weekend or he’ll leave her. In an attempt to save her troubled marriage she agrees to go.

When Jake asks her to submit one more time, Frankie is initially outraged. After all, it’s been two years since their D/s dynamic ended and she’s no longer a submissive. Is she? She still loves Jake and doesn’t want to lose him so she agrees, even if it’s just to prove that she’s now as vanilla as the ice cream in their freezer.

But Frankie is soon reminded of how delicious it feels to kneel at her Master’s feet. Her fondness for punishment and a good spanking leaves her begging for more. And when their old friend and owner of Dominion, Marco Alessi, offers to use her as the subject for a rope demo she’s finally forced to face up to her kinky needs.

But that’s not the only thing she has to come to terms with. Beneath her tough exterior lies a grief that has been buried for two years. As her submission starts to melt the icy core inside her heart, it sets off a chain of events and emotions that could either make her marriage stronger than ever or completely destroy it.

The long, sweeping drive leading up to the enormous house was impressive, and Frankie silently—and grudgingly—admitted to herself that Morgan Manor was stunning. The extensive grounds were laid with lush green lawns, and age-old oaks proudly lined the gravel drive.

As the car crunched closer toward the house, she stared in awe at the imposing mansion looming in front of them. She wasn’t an expert, but she guessed it must be at least four or five hundred years old, maybe more, and would probably have been a significant stately home at one time. Large leaded windows, encased in thick, stone arched frames, glistened in the late afternoon sunshine and little ornate gargoyles grinned cheekily down at them from lichen-stained buttresses.

She glanced quickly across at Jake as she climbed out of the car and was slightly unnerved by the solemn expression on his face. He was normally quite easy to read but now she had no idea what was on his mind. His silence added to the subdued sounds of the countryside, with only a few birds letting her know that she hadn’t lost the use of her ears.

Jake took her arm and led her toward the house. She didn’t know why, but she had the distinct feeling that this house was hiding some secrets. Secrets that she’d bet Jake knew about but wasn’t telling her. What’s he up to?

They climbed the stone steps leading up to a heavy, oak door and, just as they approached the top step, the door opened and an impeccably groomed doorman stepped aside to allow them entry. “Good afternoon, Sir,” he said to Jake, and bowed slightly.

Frankie scowled. How rude of him not to address her as well.

Jake nodded at the doorman as he led them across an enormous hallway toward an antique desk discreetly placed near a grand piano. The only sound came from the old creaking floorboards and the crackle of an open fire on the other side of the spacious hall. The burning wood, mixed with the smell of beeswax and furniture polish, added to the calm, but slightly austere, ambiance of the grand hall.

When they reached the desk, a tall, elegant lady emerged from behind a door and greeted them with a friendly smile.

“Jake. How nice to see you again.” The lady’s voice was warm as she shook Jake’s hand before turning her gaze to Frankie. “And you must be Francesca.”

“Frankie. Mrs. Hamilton,” snapped Frankie. She was aware that Jake had stayed at the hotel for one of his writing workshops recently, but still, she wasn’t impressed by this woman’s over-familiarity. She thought this was supposed to be a classy establishment?

As Jake checked them in, the lady turned back to Frankie. “I’m Cleo, manager of the East Wing.”

“That’s where all the fun happens at weekends.” She winked in an almost conspiratorial way then turned her attention back to Jake, who had finished signing the necessary paperwork.

“James will take you to your room now. Welcome drinks will be served at six o’clock in the drawing room. Please be prompt. In the meantime, feel free to make the most of our facilities.” Cleo nodded at an older man dressed as an old-fashioned butler, who politely bowed and took their bags.

As soon as they were alone in their room, Frankie shrugged her coat off and looked around. The room was enormous, with a large bay window at one end and a stone fireplace at the other. A bigger than average four-poster bed dominated the room, its bedspread and cushions matching the heavy curtains framing the windows.

Frankie’s eyes were immediately drawn to a very expensive-looking desk against the far wall and her mind wandered to the small laptop she’d secretly hidden in her bag before they’d left. If she could persuade Jake to disappear for a while, she might be able to finish the report she was working on.

Fixing a smile on her face she turned to Jake. “Why don’t you go down for a swim while I unpack? I assume there’s a pool?”

To her surprise, though, Jake shook his head and crossed his arms firmly across his chest. “I don’t think so,” he said in a low voice. “I thought we agreed—no work this weekend?”

She turned her back on him to find her bag. Let him sulk. If he really was so fucking adamant that she stayed in this stuffy old place, he could at least allow her an hour or two to finish her work.

Jake suddenly grabbed her by the shoulders, swung her round to face him and pushed her hard against the door. She gasped, completely thrown off guard. He held her in place with a steely grip. Then he reached up, took her chin firmly in his free hand and forced her to look at him.

Outrage exploded deep inside her, but before she had a chance to express it, he clamped his lips down hard on hers and forced his tongue into her mouth. Her first instinct was to struggle, but as that was futile she remained completely immobile under his iron grip.

Then, to her horror, an old familiar heat ignited between her legs and she weakened as Jake continued to take what he wanted from her. The kiss was anything but gentle, and Frankie knew, with a sinking feeling, what that meant. Jake was in Dom mode and, damn, she was responding.

No, no, no. I can’t—won’t submit again. But she couldn’t deny the dull ache in her pussy and her legs trembled slightly with the realization that she was enjoying Jake’s rough treatment of her.

Suddenly, though, just as quickly as he’d grabbed her, he let go again, leaving her standing unsteady and speechless by the door, her lips swollen and her eyes filled with tears. Jake towered silently over her, his eyes burning with raw emotion.

“I said no work this weekend. I want your undivided attention—and your complete surrender.” His voice was gravelly and dangerous when he finally spoke.

That was when it dawned on her that she’d been set up. This was no ordinary hotel. He’d lured her here under the pretense of a romantic weekend, but she knew that when he demanded her surrender like that, he had anything but romance in mind.

Anger simmered deep inside her as his words echoed in her ears. “You bastard,” she hissed. She pushed him roughly away from her then stormed toward a door she assumed led to the bathroom. But just as she reached out for the handle, Jake grabbed her from behind and practically threw her onto the bed. Without a word, he pinned her down with one hand while he pulled her skirt unceremoniously up over her thighs.

Frankie was so shocked, she didn’t react at first. Was he going to force himself on her? He’d never done that before, even when they’d been in the most intense stage of their D/s relationship. She whimpered as he pulled her knickers down just far enough for him to gain access to her pussy, and when he parted her legs and thrust two fingers deep inside her, she cried out in dismay and lust.

He abruptly withdrew his fingers again and sat up. Without a word, he held his hand up in front of her face and she knew she’d lost the fight. His fingers were glistening with her arousal. He’d made his point. Even she couldn’t deny the obvious evidence of her body’s betrayal.

It’s good to get back to the kink, and Ultimatum by Katy Swann didn’t disappoint! This  was an enjoyable book and I’m quite looking forward to the next book in the series, I give this 4...

Share what you thought about The Ultimatum and earn reward points.

I, like so many others, went to see the Fifty Shades of Grey movie with great anticipation.  I went with an open mind, aware of all the criticism, but wanting to form my own opinion and, despite the bad reviews, I enjoyed it.

Someone asked me recently what inspired me to write my latest book, Dominion, The Ultimatum and I had to give it some serious thought. It’s funny, once a hint of a thought takes hold it seems to develop a life of its own and, after a while, it can become hard to remember what the original idea had been.

Other books in the Dominion seriesView Series Page