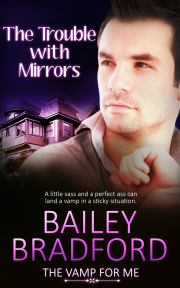 The Trouble with Mirrors PRINT

Paolo has watched his friends and coven leader find mates, their other halves. He’s ready to find someone just for him, though that means getting out and actually going somewhere.

When his coven leader, Claude, asks him to help out with a bit of a spy mission, Paolo agrees. He puts on his sexiest—and skimpiest—club outfit and dives right in.

But the mission brings him head to head with his coven’s worst enemies, the Dark Slayers. And when he finds himself attracted to one who’s about to be initiated against his will, Paolo can’t resist helping the man out…and having some really hot sex while he’s at it.

Then the Dark Slayers find them…

The gold shorts were maybe too much. Paolo glanced over his shoulder and tried to look down at his ass. It really sucked not to be able to see himself in the mirror. Granted, the shorts would show up. It was just him, and those like him, that didn’t have reflections.

“Definitely the worst thing about being a vamp,” Paolo muttered, giving up on seeing his butt. It was there—he knew that much—but the overall effect of those shorts on his rump was beyond his ability to observe. He’d just have to hope his butt looked delicious. Or at least distracting—in a good way.

Paolo had very little body hair, just a smattering on his chest right between his nipples. It didn’t even form a trail down to his pubes, instead completely vanishing until right below his belly button. His armpits and legs were sparsely covered, too, and his butt had only the lightest dusting of fuzz over it. Most of the time, he liked that he wasn’t a bear—he was, thanks to the fact that he’d been turned on his twentieth birthday, a timeless twink.

Paolo snickered and slapped his butt cheeks. They were firm at least, and if he didn’t have the best ass in existence, he certainly didn’t have the worst, either—and his rump was real, honed and shaped by a lifetime of running and climbing mountains and hills in his native country. He’d been in peak shape when he’d been approached by what—who—he’d thought was an ancient god long ago.

Thinking about his past was a waste of time. Paolo ran a hand over his cock, then his balls, all barely covered by the shorts. He could almost make out the slit on top of his dick through the thin material. He grinned and figured he’d do well enough tonight at the club. He didn’t even feel nervous about going, which was good. It’d taken him a few years to get past being attacked by vampire slayers in a dingy club—the same one he was returning to tonight.

Paolo tugged on a gold mesh shirt. He settled it so that his nipples were sticking out through two of the holes in it.

“Very nice, Paolo,” said a man with a very cultured voice. One Paolo knew quite well.

“Claude.” Paolo hadn’t heard his coven leader enter the room—no surprise, considering Claude was freaky-sneaky and all-powerful, or just about all-powerful. “Is this good?” Paolo gestured to his clothes. “Or is it too good?”

Claude looked him over slowly, then frowned. “Abernathy, Radney, your opinions, please?”

“Too much?” Paolo started worrying immediately. He’d been joking about it being too good, but maybe it was. Perhaps more clothes were in order. He wanted to please his coven leader, but he also wanted to look sexy and maybe, just possibly, get laid. It’d been a while, way too long for a guy like him to go without. “I still have to put my boots on.”

He crossed over to his dressing table and sat down. His white and gold ankle boots bordered on gaudy, but he loved the hell out of them. Paolo slipped them on and sighed. They were made of the softest Italian leather, and he would have worn them nonstop had they been practical. Part of the fun of wearing them was how impractical they were, however—the heels were spiked and a solid four inches high. It’d taken him a month to learn to walk in them without face-planting.

Paolo stood and struck a pose, left hip jutted, one leg out, other knee bent, head back, nose up, arms spread and hands up—almost jazz hands, but not that tacky. “How do I look?”

No one else spoke.

Paolo lowered his head to find Abernathy and Claude looking at Radney like he was nuts.

Radney blushed and shrugged. “What? I thought that’s what the cool kids said now. Paolo’s slaying that look. If I weren’t mated to my amazing…mate…I’d be all over him.” Radney huffed. “Well, you know what I mean. Paolo looks like walking sex. Sex on legs. Er. That’s a good thing, isn’t it?”

It was a very interesting read. The two main characters in this book are Paolo and Dakota. Paolo is the vamp and Dakota is supposed to be joining the Dark Slayers whether he does it willing or not.<...

The Trouble with Mirrors reminds me more of the first book in the series with its humor... I adored Paolo.

Whew! Those boys were hot together. This may actually be my second favorite...

Share what you thought about The Trouble with Mirrors PRINT and earn reward points.