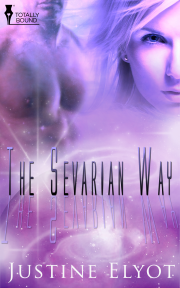 In space, no one can hear you scream. So you can spank as hard as you like.

This makes her the perfect crew member to accompany him to the surface of Paladium Three, a dead planet where old-fashioned service and discipline were woven into the fabric of life.

There might not be any life forms left there, but what Paul and Suka discover is fascinating evidence of a culture that both realise might have suited them very well…

The temptation to experiment, risk-free, with the kinks they have been denied all their adult lives, proves too much for the space explorers and they give their fantasies free rein.

But will this be a unique, never-to-be-repeated experience, or will Paul and Suka find a means to fully embrace the Sevarian Way?

It wasn’t the danger Suka had a problem with, nor was it the workload. She was easily bright enough to handle the multiple data streams that poured into her Communicatex every parsec of every timeslice. In fact, she had graduated at the top of her class in the Academy, which had greatly contributed towards her selection for the crew of the Ulysses IV.

No, what Suka struggled with was the rules. Endless, relentless regulations to follow and obey, seemingly pointless, in many cases. There were rules about bedtimes, rules about how much to eat, rules about uniform, rules about socialising, rules about how to address officers of various ranks within the starship. Suka had always been one for following the spirit, rather than the letter, of the law, and this tendency was making the voyage one of low-level misery rather than exciting discovery for her.

Even more galling than the rules themselves was their enforcement by one Commander Azed Paul, a man with whom the toss was impossible to argue. Commander Paul was accustomed, over several turbulent years in the outer rim of the Spaelian Galaxies, to running the tightest of ships. One speck of lint on an officer’s skintight dermolex trousers would be noted and remarked upon. He had found and destroyed Suka’s box of contraband sugarfizz within one hour of her embarkation. His motto was ‘discipline or doom’. Suka was inclined to favour doom just now.

She crouched low over her monitor, hoping that her apparent commitment to it would make her invisible to Commander Paul. Her hair, tightly braided now after an earlier contretemps over ‘professionally appropriate styles’, pulled at the skin above her ears and temples every time she hunched a little further down. She knew he was going to mention her confiscated glowstick at some point, but she really didn’t see what was so wrong with a bit of reading in bed. Was she supposed to abandon all her extraneous interests in life, sacrifices to the efficient running of the ship? It was too big a thing to expect of a twenty-two-year-old woman.

Paul was busy, bent over the shoulder of another ensign, her friend Callil, checking that every machine powering this heap of junk was correctly calibrated. From across the bridge, his backside in the figure-hugging uniform pants drew her eye in an irritatingly irresistible fashion. Whatever else she might think of him, she couldn’t deny he had one of the finest arses in the Quadrant.

Suddenly, he straightened up and spun on his boot heel, catching her in her mildly lustful musings. Suka’s head dropped so swiftly she almost banged her forehead on the screen, but it was too late. His keen blue-glass eyes had registered her interest, and he smiled his broad, sharky grin before addressing her.

“Ensign Demontel, we need to discuss your reading habits,” he proclaimed, crossing past the banks of flashing hardware towards her station.

Immediately, she raised her chin in stubborn challenge, preparing to defend her position.

“Is reading against the rules now? I’m an anthropologist—if you expect me to abandon study of the very reason I’m on this voyage, then...” She broke off, unable to finish the sentence, fearfully reluctant to take it to its logical conclusion of ‘you’re a stupid bastard’.

“You know very well that reading isn’t against the rules. Reading after Lights Out is against the rules,” said Paul, his voice teasingly light. “As for anthropology, you have studied it for six years, and now you have the chance to put your knowledge into practice in the field. It’s why you’re here, isn’t it, Suka, or am I mistaken?”

“Yes, no, yes, when we’re cataloguing and analysing the new planets, that’s great. But all this in-between time...just drifting around in the vessel…it’s boring.”

“Boring, Ensign Demontel?” he said eventually. “Well, I’m so sorry not to provide you with the non-stop circus you evidently crave, but I thought you might have been prepared for the fact that space exploration requires a great deal of time in space. What do they teach you at the Academy these days?” He shook his head sadly before snapping into grim disciplinary mode. Suka always identified this by a locking of his jaw and a narrowing of his eyes. She swallowed, aware of her hair prickling her skin. “You won’t be seeing the glowstick until we return to port. And, for the remainder of this shift period, you will catch up on lost sleep by going to bed at the start of Association Time.”

“Oh, don’t make me miss Association Time!” wailed Suka, embarrassingly aware of how bratty and pathetic she sounded. “It’s the only thing to look forward to most days.”

“You can sulk all you like, Ensign,” said Paul briskly. “I won’t have deliberate rule-breaking in my crew, and the sooner you process that lesson, the better for you. I had such high hopes for you when I read your reference from the Academy, and I don’t take disappointment well.”

Share what you thought about The Sevarian Way and earn reward points.