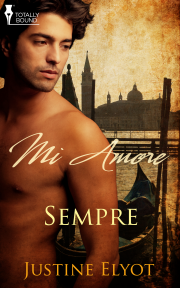 Life imitates the passionate art of the opera when Julia finds herself caught between her two leading men.

Julia's dream of singing the role of Tosca in Rome is set to become reality. But when her new leading man inspires the same reaction offstage as he does on, she truly begins to understand how her character must have felt. Especially when the villain of the piece is hell bent on replicating his role as dark seducer into the bargain.

When certain information about her lover's turbulent background is revealed, Julia must fight for their relationship - and try to thwart the machinations of the baritone, who covets her for himself. Will passion triumph against the odds? Or will Julia's love story, like Tosca's, end in tragedy?

From the wings of the Teatro dell’Opera, Julia indulged the secret thrill that hearing the dramatic opening chords of Tosca always elicited. Even now, six months after the audition, she had to remind herself that hard work and dedication had got her here, not the fairies. And no, it was not a dream either. Starring opposite two of Italy’s most celebrated male singers was no longer an ambition. It was reality. Or, at least, it had been, until yesterday.

“Have you seen him yet?” Liddy, a chorus member and Julia’s closest friend here in Rome bustled through the safety curtain, eyes bright.

“Oh, is he here? I didn’t think he’d get here so soon. Thought Rolando was going to understudy for the rest of the week. Who have they got?”

“Nobody knows him. Apparently he’s on loan from some company out in the boondocks, if they have boondocks in Italy.”

A man barged through them and out onto the stage. He turned to face the auditorium, which was empty but for the orchestra and director, before opening his mouth and setting free the most perfect sound Julia had ever heard.

“Who...is that?” The words fell quietly from her stunned, slack jaw.

“You didn’t tell me anything. Seriously, this is Tempi’s replacement? Who is he?”

“Does he live on the second floor?” Julia referred to the Suzanne Vega song.

“And for another,” Liddy said, “he could stunt-double for Adonis.”

“You don’t go for handsome men, do you, though?” Liddy sighed. She had spent the last few months of rehearsal trying to fix Julia up with a selection of Rome’s most eligible bachelors.

Share what you thought about Sempre and earn reward points.