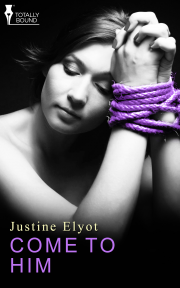 Her submission is for sale — but is the price he paid for it enough? Or are the stakes higher than she realises?

Erin has her future all planned out. A postgraduate qualification, leading to a life in academia. There's only one snag — she needs money. Taking her inspiration from the story of a girl who auctioned off her virginity, submissive Erin decides instead to offer her services to the highest bidder for one month. She only needs enough to pay for her studies, so she's not quite prepared for the size of the winning bid.

What kind of man would pay a million pounds for a love slave? The kind of man who hides himself away on a remote fortress in the middle of the sea and does his errands by helicopter. Thrown into an unfamiliar world of luxurious isolation, Erin knows she will need to be strong to tough this contract out. Will Erin's submission please her new master-for-a-month? And what if a month isn't long enough?

Publisher's Note: This story has been previously released as part of the Bound to the Billionaire anthology by Totally Bound Publishing.

She should have expected a lot of paperwork, but somehow the number of times she was required to sign on dotted lines still came as a shock to Erin.

"And the non-disclosure agreement," said the lawyer smoothly, passing another sheaf of printed material across the desk.

She read it through, trying to take her time and be level-headed, but her vision skittered across the page, picking up legalese phrases here and there. The gist was that she was never to discuss what passed between her and the lawyer’s client with any third party—most specifically she was never to publish any account of her experiences with him, nor ever mention his name in connection with hers.

Picking up the pen and signing, yet again, she let her eye fall on the printed-out copy of her original advertisement on MasterMe.com. That nervous moment of pressing the button and making her plea live to hundreds of thousands of fellow fetishists seemed a million years from today. She could barely read it without cringing now.

"You’ve all heard of the girl who auctioned off her virginity. Well, I’m no virgin, but I do need funding for my MA in Women’s Studies, and I can offer something that might well appeal to those dominant men among you.

Subject to agreement of limits etc. for a period of one calendar month—will probably have to be August owing to academic commitments—I can obey your every command and satisfy your every whim.

I look forward to hearing your orders."

A blizzard of interest had buffeted her inbox, most of it spurious, but in the end she had narrowed down the field of bidders to three.

The winning bid had taken her breath away.

Enough to fund a lifetime’s research, let alone the tract she intended to write on the contrast between Victorian and medieval attitudes to female sexuality. She had almost vomited when she had seen the email with the offer.

Of course, it had to be a hoax. Nobody would offer that. Nobody in their right mind, surely.

But communication over the telephone with 'Mr Nobody’s' legal team had convinced her that it was serious, and now she was meeting his solicitor in his London office to finalise the arrangement.

It didn’t help that a couple of journalists had seen her advertisement and posed as bidders themselves, hoping to get a story about what kind of woman might do such a thing. Erin had sniffed out their misogynistic agenda straight away and blocked them, but she was wary all the same.

And now she was really nervous. Her name stared up at her, in black and white, agreeing to do who knew what with who knew whom.

"Okay, so is that everything?" she asked, working hard to maintain a veneer of self-possession in the face of this dispassionate bespectacled suit.

"I believe so," he said with a chilly smile.

Her skin goose-pimpled. What on earth must he think of me?

Share what you thought about Come to Him and earn reward points.