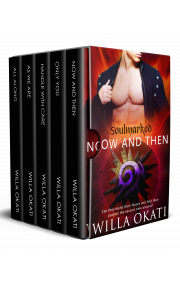 Robbie and Ivan wrought havoc on their first chance at love. Can they mend their fences and find their passion the second time around?

Soulmarked as mates, Robbie and Ivan come from different worlds. Robbie’s the oldest son in a long line of outlaws who live squarely on the wrong side of the tracks, and Ivan’s family tree is packed with law enforcement. That didn’t stop them from falling in love, but when they risked tearing each other apart, they cared enough to let go and hope they’d find a better life.

Years later, the strength of their soulbond still burns bright when chance brings Robbie and Ivan together at the football game of the year. The passion they felt for one another is as powerful as ever, bringing them into explosive contact. They’re not the boys they used to be—Robbie’s turned his life around and raised his younger brothers to be good men, and Ivan’s learned to stand tall and mix justice with compassion. But though they want to hope they can be happy now, not everything has changed. Maybe not enough has changed.

Or has it, after all?

It’s up to Robbie and Ivan, now. Only they can make the choice that will change their lives forever.

Lovers and best friends, the unmarked Nick and Barrett risked everything to present themselves as a bonded pair. They thought they were safe, but things are changing…

Nick and Barrett aren’t soulmates. Lovers for years, they’ve rolled the dice and taken a gamble on presenting themselves as a bonded pair. They knew the risks, but think they’re safe. They’re well over the age when soulmarks usually appear, and none of their friends or family are any the wiser.

Until now. After exposure to the incendiary reunion between his friend Ivan and Ivan’s soulmate Robbie, Nick’s soulmark has begun to emerge.

Faced with a devil’s choice, Nick and Barrett are forced to confront the real possibility of being driven apart—unless they can fight the animal urge to find their mates. Do they have what it takes to stand in defiance of double jeopardy, all for the sake of love?

Love conquers all—even a proud man’s need to stand tough. No matter what it takes to heal his wounded soldier, Daniel is willing.

Daniel keeps a secret close to his chest—he’s long believed his soulmate-to-be, Jesse, was killed in action before they had a chance to fully bond. Jesse had asked Daniel to wait, to be patient, and to grow up a little before he fell in love.

In return, Daniel promised to wait for Jesse and take care of him—always.

Now, word’s come that the report was in error. Jesse survived, and has returned home, but doesn’t want to see or hear from Daniel. When Daniel tracks Jesse down, he finds a broken, wounded man who isn’t glad to see him.

While Jesse knew finding his soulmate would help him heal, he’d wanted to become strong enough to be worthy of Daniel before they reunited. Angry and ashamed, he’s ready to run again.

It’s a hard row to hoe and a nut almost too tough to crack, but Daniel’s come this far in search of his soulmate. He won’t give up now—and he won’t let Jesse give up either.

Wild, rebellious, and rakish, Cade’s been a bad boy since the day he was born. Don’t get him wrong—he’s as aware of his faults as he is his virtues, and he thinks he’d be better off without a mate of his own. He’d be a hell of a handful to keep up with.

Then a chance encounter brings Cade into Dennis’ path. Blind since birth, Dennis prides himself on being plainspoken and knowing how to have a good time. He isn’t looking for a soulmate either, but after meeting Cade he’s tempted to change his mind.

Nathaniel’s been keeping a secret—even the most improbable soulmates can be drawn together.

Nathaniel, youngest of the brothers, has been keeping a secret. He knows the identity of his soulmate, but he hasn’t told anyone—because it’s not just impossible, it’s improbable. No one has more than one soulmate in a lifetime, but his new mark has drawn him to Abram—a widower who had, and lost, his mate long ago. It cannot happen, and yet it has…and Nathaniel’s falling in love, fast.

Abram is charmed by the adorable amber-eyed man, but not fooled. Falling for Nathaniel would be a one-way ticket to Heartbreak Hotel. Abram’s twenty-five years older, and he’s had his time with his soulmate. He knows there are no second chances, but every time Nathaniel enters his life, he wins another piece of Abram’s heart. Even if Abram knows better, he’s beginning to wonder if dreams can come true.

Or if miracles might just have been real all along.

“Finally.” Nathaniel collided with Robbie, wrapping himself around his brother from the side.

Robbie was sturdy enough to take the hit without stumbling. He knuckled the boy’s head. “You’re not excited or anything, are you?”

“Are you kidding? This is amazing.” Nathaniel’s eyes glowed like warm brown stars. He’d never been tall or strong, always the youngest and most in need of looking after, but try to coax him away from his love of sports…well. It’d be easier to teach a dog to climb trees. He ducked away from Robbie’s fond assault on his noggin. “Did you ever think they’d actually finish the coliseum?”

Honestly? There’d been times Robbie had doubted. Plans for the giant sports center had been drawn up before he was born, and they’d laid the foundation around the same time he’d tried to teach Nathaniel how to ride a bike.

All good things had their own time, he supposed.

“I can’t be sure, but I think that means no, he didn’t,” Cade butted in, sandwiching Robbie on his other side. “It can be hard to tell the difference, but that particular subtle nuance of our big brother’s somber demeanor—a hint of a smile—might just mean he’s pleased to be proved wrong. Are you?”

Robbie rolled his eyes indulgently. Mother Nature must have known Cade’s destiny was to be a middle child. He’d come out of the womb raising hell, and had pounced gleefully on the chance to teach Nathaniel his ways when the youngest boy was born. His brothers were noisy, energetic, affectionate double handfuls of trouble. He had no idea how he could ever do without them.

He pulled Nathaniel’s ear instead of a lock of his brother’s hair. “I did buy tickets for the first game, opening night,” he said. “Would I have done that if I didn’t have faith things would turn out?”

“It’d be the first time in your life,” Cade said with careless ease. He caught Nathaniel by the shoulder and hustled him a few steps forward. “I think they might be almost ready to unlock the gates. Come on. I’ll show you how to throw elbows.”

Robbie shook his head as he watched them go. The gates would open when they opened, and their seats for the first game were numbered. Come in early or come in late, it wouldn’t make any difference…but on the other hand, he couldn’t blame them for their eagerness. Or their teasing him for being a serious-natured bastard. After all, they hadn’t known him in the days when he was different. They weren’t old enough to remember the things Robbie had done. Or to know well most of the people Robbie had known, and those who’d known Robbie in return.

Some more than others. Some very, very well…

Robbie rubbed absently at a spot over his breastbone.

He wasn’t the only one watching his brothers working hard at their playing around. Just ahead, a tall drink of water with a head of wild chestnut curls whistled and elbowed a shorter, ginger man beside him. “Get a load of that, would you?” Chestnut said, helping himself to an ogle of Nathaniel’s trim shoulders and narrow waist. “I wouldn’t kick him out of bed for eating crackers.”

“You’d have a hard time finding him in the sheets,” his friend said, apparently not as impressed by Nathaniel. He lifted his chin at Cade. “Now, that one? The way he walks? He’s packing, front and back. That’s more my kind of man. You’re taller. Can you tell if they’ve got soulmarks?”

“Not as far as I can see, though I’d be glad to get a second look—”

Chestnut didn’t get to finish what he had to say. Robbie drew himself up to his full six feet of height, took two steps forward to cast his shadow over them and cleared his throat. Some people Robbie could have mentioned would have burst into giggles at the way the rakish pair’s eyes widened. There were advantages to being tall and looking, as Cade usually put it, like the kind of rough, tough and risky sort of man that motorcycles were made for.

“They haven’t found their mates yet,” Robbie said once he was sure he’d gotten their full attention. “And if I have anything to say about it, nobody’s going to be looking tonight, either.”

Share what you thought about Soulmarked Box Set and earn reward points.