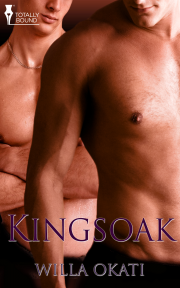 Matthew's at a place in his life where he's got nowhere to go but up.

Reckless, he walks into the heart of Kingsoak, the most dangerous tangle in the urban jungle - where instead of robbers, rogues and criminals, he finds a community where the outcasts take care of their own, graffiti is a stunning art form, and a rakish street-fighter waits to transform Matthew's life from the ordinary to the legendary. But will Matthew have the courage to stay with Gale, or will he return to his familiar world at the break of day?

Matthew looked up from his intricate work buckling the multiple small latches of the complicated weave of his leather bracelets. He ran his fingers over the inscribed designs, the leather dark against his fair skin, contrasting with the sprays of freckles on his slim arm . The bedroom light shone warm and golden as it fell across the doorway and illuminated his lover Gale, who leaned on his forearm against the door frame, his hip cocked. Edible, and he knows it, too.

Matthew’s cock twitched, interested. Of course, Gale had always had that effect on him. He knew what Gale was up to, employing his charms now, of course. He and Gale were meant to meet up with some pals, Horatio among others, sink a few bottles of beer and laze about in good company. Matthew knew Gale had no objections of a good time on the town, but would love nothing better than to walk in half an hour late with a love bite darkening into a bruise on his neck and his hair still mussed from sex, fucked to within an inch of his life and displaying the proof like peacock feathers.

Point required point. Matthew arched an eyebrow at Gale and returned his attention to his bracelet, hiding a smile. After a suitable span of time spent making Gale wait for it, Matthew cleared his throat. “So a nun, a wrestler and a flamer walk into a bar —”

“Oh, you think you’re funny, do you?” Gale pushed away from the doorway and pounced on Matthew at the end of his nimble stretch, wrapping Matthew up in his arms and nuzzling at his throat. Gale had magnificent arms, strong and flexible, and once they latched on they’d never let go until their owner had had his way.

Matthew decided he didn’t mind a bit. He surrendered with a small, happy moan, letting Gale push him against the dresser. Gale knocked Matthew’s legs further apart with his knee, and inserted one taut thigh between both of Matthew’s. He leaned his weight forward and, not incidentally, discovered how much Matthew didn’t mind. “Happy to see me, sailor?” Gale inquired wickedly, rocking his thigh up and across the firmness of Matthew’s rising erection. “Want to buy me a drink?”

...this was a hot, enjoyable listen. I was sad when it ended.

Share what you thought about Kingsoak and earn reward points.