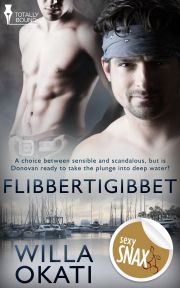 Is Donovan ready to leave routine behind and take a chance on a flirtatious flibbertigibbet?

Donovan thought he had his life all planned out. He knew where he was headed, and how he’d get there. Might not have been the most exciting life, but it was safe. Sensible. Practical. Just what he wanted.

That was before his house burned down in a freak accident. Now, Donovan’s life is all about crash space on a friend’s houseboat and entertaining the antics of his new neighbor and marina maintenance man Leaf. If Leaf ever takes anything seriously in his life, he shows no signs of it. He’s loquacious, outrageous, and not even a little shy. Absolutely not the kind of man Donovan had thought he’d fall for before he tipped head over heels for the flibbertigibbet’s offbeat charm.

When it comes down to a choice between sensible and scandalous, is Donovan really ready to leave routine behind and take the plunge into deep water?

Donovan didn’t know what he’d expected from the marina, but this wasn’t it.

“You can’t get there from here?” He hitched the carrying strap of a bulging Army surplus duffel higher on his shoulder and took two steps back from the edge of the dock to better eye the Water Taxi sign above his head. At five foot three inches, Donovan was all too accustomed to seeing the world at odd angles. “Seriously?”

The taxi driver laughed, hearty and easy. “You could try to swim, if you like,” he suggested.

Donovan couldn’t make out much detail on the man, hidden as he was by the shadows from his ball cap and the taxi’s canopy. Is it called a canopy, or something more nautical?

“It’s only about thirty yards, and the water’s right at sixty degrees. Nice and refreshing.”

Honestly, he made it sound almost tempting. Slogging his duffel five blocks from the nearest car park on an unseasonably warm day had left Donovan sticky with sweat. Short-cropped wisps of hair stuck to his forehead and temples.

On the other hand, the distinct possibility of drowning.

The taxi driver cracked a broad, white grin at Donovan. Surely he had more teeth than the average man. Either that or a second job as a walking Colgate advertisement. Good thing he did stand in the shadows—otherwise, he might have put someone’s eye out with that gleam. “Five bucks, one way.”

Donovan winced as he reached for his wallet. He might have five dollars in there if he searched every card slot for forgotten laundry money. “Highway robbery, isn’t it?”

“Waterway robbery, more like,” the driver said with a carefree shrug. He winked at Donovan. Leaf, said the name tag pinned crookedly to the left side of his sleeveless muscle shirt, just over the marina’s logo. “Tell you what, though. I’m headed back over there anyway. I could give you a lift instead of a fare this once. Our secret.”

Who would I tell? Donovan wanted to ask, but didn’t. Better to shut up and say thank you. These days, he had to count every penny and squeeze each dollar until it squeaked. He picked up the knapsack he’d rested at his feet as a counterweight for his larger duffel and stepped carefully across the eight inches or so of open water between dock and taxi. He wasn’t at his best when it came to deep water. “Appreciate it. I’ll pay you double some other time.”

“Not a problem.” Leaf swung the taxi’s half-door shut and took off his ball cap to wave it in front of his face. He’d had a tumble of black curls hidden under there, offsetting surprisingly severe eyebrows and cheekbones the likes of which Donovan’s female friends would have cheerfully killed for.

Sweet Lord have mercy. Donovan mentally bit his fist. All that and full lips, too, as well as a pointed chin and a sharp arrow of a nose that Leaf lifted to sniff the air.

And there went the bubble, bursting open with a tiny, disappointed pip! that reminded Donovan of why he was there in the first place.

“I smell of smoke,” Donovan said. “House burned down a few weeks ago. I still haven’t gotten it out of the stuff I salvaged.”

“Yeah, well…” Donovan shrugged uncomfortably. “I lived. Can’t ask for much more than that, can I?”

“I don’t know. I think you could ask for a hell of a lot more. Like your house not burning down in the first place, for one.” Leaf waved backward at the taxi’s three rows of utilitarian plastic bucket seats. “Sit anywhere you like. It’s not as if I’m full up. Or you could stand right where you are—I promise I won’t let you tip overboard—and pass the time of day.”

Wait. What? “Are you flirting with me?” Donovan asked, taken wrong-footed. “Me?”

Leaf’s white smile widened further still, which Donovan would previously have thought an impossibility. It should have looked odd, or a bit like a lean timber wolf who’d just spotted a particularly tasty morsel wandering by, but it didn’t. “Why not you? You seem like an interesting sort. I can always spot the ones with good stories to tell. I’ve got an eye for it. Also, sorry if you think it was, but the way you’re looking at me isn’t exactly subtle.”

Overall, a very cute novella scattered with humorous sexy moments, the prerequisite bit of angst and then the ‘happy ever after’. Bonus: a sweet and ebullient flibbertigibbet of a character that will...

The title attracted me to this book; for one, I hadn’t heard that word before (hence the Merriam-Webster quote) and secondly, it made me expect a light, funny, easy read, just what...

Share what you thought about Flibbertigibbet and earn reward points.