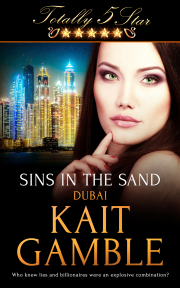 Sins in the Sand

Who knew lies and billionaires were an explosive combination?

Kendra has scrimped and saved to care for her ailing father and to keep bailing out a sister who can’t seem to get her life in order. When Kendra is moved to Dubai and into a job at the illustrious Totally Five Star Hotel, she can’t afford to let anything ruin it.

So when a celebrity whom Kendra closely resembles doesn’t show up for a big charity event and Kendra is recruited to take her place, she can’t say no. After all, everything has been set up so that her deception won’t be exposed…

Only, no one could have predicted that rival billionaires Nikos and Dmitri would be at the event, willing to bid astronomical sums to win the dinner prize—time with Kendra. Or that the chemistry between her and the men would be so explosive…

Overwhelmed and completely out of her depth, Kendra finds herself drawn to both powerful, enigmatic men, and they seem just as taken with her.

But what will Nikos and Dmitri do when they find out the truth?

Publisher Notice: This book has been made into a game with Stories & Choices.

Kendra sighed but kept the practiced smile fixed on her lips. “I’m sorry, but—”

“Sorry is not a word you should use with a patron.” The overly starched man glared down his nose at her. “I was told this was a first-class hotel. You should be able to get me whatever I need!” He slammed his hand against the glossy marble of the strategically placed barrier between them.

“Sir…” How could she put this delicately? “We do not procure…that sort of thing.” Kendra fought not to shrink away from his wide-eyed rage. She also caught the tremble in his hand and the sweat building at his temples and on his upper lip. Would he turn violent if she couldn’t get him what she wanted?

“Where’s your manager?” he roared.

He lunged over the barrier at her. “If you ‘sir’ me one more time…!”

“Mr. Castillo. What a pleasure to see you again.” Julia Monroe slipped in front of Kendra with an easy smile. “How can I help you? I’m Julia, the manager here.”

“Your receptionist,” he spat, “doesn’t seem to understand how to treat guests with the proper respect.”

“Kendra is new. I’m sure we can help if you follow me.” Julia glanced pointedly at Kendra as she brushed past. She was going to get it when Julia was done with the man.

Still, it was preferable to dealing with an irate, entitled junkie. Forcing her shaking hands to function, she finished off the clerical work she had to do before another patron greeted her.

Being an employee at a Totally Five Star Hotel was an amazing opportunity. Kendra had imagined rubbing shoulders with the rich and famous while working in the most luxurious of hotels. So when she got transferred to Dubai, she thanked her lucky stars. In her mind, she had made it into the best of the best.

It had only been a few weeks, but Kendra had already seen more wonderful and bizarre things than she’d ever wanted and had to deal with some of the most insane clientele imaginable. It ranged from strange requests like taking toy poodles out to relieve themselves—only on real grass—in the middle of the night, to arranging ‘private parties’ with arrays of women who were obviously paid to be there. And she did it all with a smile.

She had worked her fingers to the bone while at university to pay her way only to have her father fall ill. It had taken everything she’d earned and then some to make sure he was comfortable in the end. Kendra hadn’t finished school, but had managed to get her foot in the door with Totally Five Star. Everyone knew that they took care of their staff.

If she didn’t get herself fired.

After receiving another set of guests, Kendra smoothed her skirt and walked into the break room for a glass of water. It was the first moment she’d had to breathe since getting in that morning. There was a tray of fruit that the staff was allowed to share and sandwiches prepared by one of the hotel’s restaurants on top of all the gourmet coffee they could drink, but she had a shake in the fridge that she liked to take sips from whenever she got the chance. It filled her up and kept her going even through the most demanding days.

Kendra opened the fridge, relishing the thought of having some of the shake. Only it wasn’t there.

One of the porters walked in as she let the door swing shut. “Ahmed? Do you know if anyone took my shake?”

He shook his head as he straightened his uniform. “I haven’t seen a thing.” Ahmed stretched his neck from side to side. “I’ve been running around trying to catch the tiny rat dogs that old lady who came in last night brought with her. Man, those things are fast.”

Kendra felt sorry for him. She might have had to deal with some crazy stuff, but Ahmed and the rest of the porters were used like serfs by the clients a lot of the time. “I feel your pain.”

He practically inhaled an apple then pounded a soft drink. He sighed happily once it was drained. “Back to work. See you later.”

She waved and plucked a few grapes from the tray.

“What are you pouting about now?” Desiree, the other receptionist, sashayed into the room on her Louboutins and sniffed at Kendra disdainfully as she pulled out a bottle of water then took a delicate sip.

“I’m not pouting. And if I was, it would be over someone taking my shake from the fridge.”

Desiree screwed up her face. “Why would anyone steal that swill?” She tapped a French-manicured nail against her perfectly painted lips. “Now that you mention it, I did throw out a molding bottle of something this morning.” She nodded toward the garbage.

That conniving… Kendra looked inside to see her still-full bottle sitting in the midst of the trash.

She fished it out and dropped it in the sink.

“I didn’t know that was still good. It doesn’t look fit for anyone to consume. Sorry.” She smirked and walked back out.

“Sorry my ass.” The woman had had it in for her since the moment she arrived and Kendra had no idea why. They’d never known each other prior to coming to work there. They had been relocated at about the same time—Desiree from Paris and Kendra from Vancouver. They rarely spoke and hardly had anything to do with each other at work and yet, Desiree seemed to hate her.

There was nothing direct or overt. Usually it was a snide comment or a backhanded compliment here and there. Or when they were stuck together, things would just go wrong for Kendra and she knew in her gut that it was because of that woman.

She poured the ruined contents of the bottle down the sink. So much for that. Kendra put the bottle in her little locker and sighed. It was going to be a long night.

Just as she was about to return to her station, Julia strode in with her phone pinned between her shoulder and her ear as she flipped through files on her tablet.

“Yes, it’s all been sorted, Katherine. Everything is a go for tomorrow.” She sighed. “All right. See you in the morning.”

Kendra handed her a bottled water. “It looks like you could use one of these.”

Julia took it, twisted the top open with a crack and took a long swig. “Thanks.”

“Thank you for dealing with that man earlier.” Kendra gave her a half-smile. “I should get back to the desk.”

“Desiree can handle that for the moment.” Julia took another sip. “Don’t let people like that man earlier get you frazzled. You held your own for a while there, which was good. But if you’re faced with something that makes you uncomfortable, pass it on to someone else. Just do it discreetly and with a smile—always with a smile.”

“I’m not used to that type of demand. He just caught me off guard.”

Julia smiled understandingly. “You’ll get the hang of it. Quickly,” she added.

Kendra certainly hoped so. “I didn’t mean to eavesdrop but am I right in thinking that Ms. Murray will be in for tomorrow night’s festivities?”

Julia rolled her beautiful brown eyes. “Yes. I guess we should be happy that she hasn’t been here since the moment the auction was announced. It’s such a big deal I never thought she would leave it to me to handle.”

It was a huge undertaking. “I guess she has faith in you.”

“More like she can’t be everywhere at once.” Julia finished off the water and put the bottle in the recycling bin. “But we’ll be graced with her presence in the morning while she makes sure everything is up to standard.”

Wouldn’t that be fun? “I’ll get back to the desk now.”

Julia nodded as she answered another call.

Kendra was so glad she didn’t have to deal with what Julia had to. She’d never been so pleased that she was just a receptionist.

As she walked back out, there was an ear-piercing shriek.

Kendra blinked as an over-bleached and overly tan woman teetered on her heels toward her. “Sorry, I’m not Kiki. My name is Kendra. I’m a receptionist here at the hotel. She should be here in the morning, however.”

“Well, that’s a disappointment.” The blonde scowled. “You look just like her. Though, I would expect the real Kiki Bryant to be dressed a little better.” She gave her a once-over and cocked her head critically.

Kendra fought to keep the smile on her face. Her clothes might be functional, but they were among the finest things she’d ever owned. Not that she owned that many clothes.

“I’m sure Ms. Bryant will dazzle you with her style tomorrow night at the auction.”

Totally 4 stars for SINS IN THE SAND, the latest in the Totally 5 Star series! I liked Kendra a lot as well; she was strong and independent, a bit of a wallflower but unafraid to take on the challenge of so...

I am a big fan of the Totally Five Star series – and have enjoyed all of them, whoever the author. This is my second by Kait Gamble, and it’s a really good read.

Share what you thought about Sins in the Sand and earn reward points.