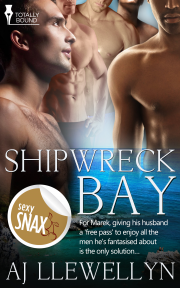 How far would you go to repair the damage an affair has done to your marriage? For Marek, giving his husband a 'free pass' to enjoy all the men he's fantasised about is the only solution…

Rising architectural superstar Marek makes a stupid mistake in hooking up with a Facebook friend for a fling. His careless behaviour soon devastates his marriage to his loyal husband, Drago. Marek wants to prove more than anything that he loves Drago and begs him for forgiveness. He books a trip to the Greek Islands with Drago, who feels vulnerable and certain the vacation is a mistake.

However, Marek soon shows a lot of the attentiveness he hasn't been lately and Marek starts to believe that maybe things can work out.

Taking a cruise through the Ioanian Islands however doesn't seem to be the best idea. What if he needs to cut and run? He isn’t sure he wants to be with Marek anymore, let alone be stuck on a boat in the middle of nowhere.

Just as he starts to relax and enjoy the timeless beauty of the island of Zakynthos as Marek begins to convince him of his remorse, the two men are abducted by pirates on an isolated white-gold sandy cove called Shipwreck Bay…or are they?

Publisher's Note: This book was previously released by another publisher. It has been revised and re-edited for release by Totally Bound Publishing.

I sat inside the decidedly eccentric suite at the Sir Francis Drake Hotel and tried to analyze my feelings as I scrutinized the empty room next door via closed circuit TV. Rain battered the window, making me feel even colder and more alienated than I already did. I hoped I wouldn’t have a complete breakdown as I waited for my husband to enter that room with the man he’d been cheating on me with for six whole weeks.

This wasn’t how I would choose to spend my morning. Any morning actually.

How could Marek have picked that ugly room for his furtive nooners? The constant clang of the Powell Street streetcar outside set my teeth on edge, the discordant room decor making it all seem surreal.

All of this was so…out of character for Marek with his dislike of any kind of ambient sound and obsession with clean, straight lines.

I became aware of my nails digging into my palms.

I jumped when our attorney, Paul Schmidt, touched my shoulder.

“You’re so wound up.” He sounded surprised. “Please, breathe.”

“I’m fine,” I lied. I was in torment. I still couldn’t believe Marek had done this to me. Tears pricked my eyes. Damn it. I couldn’t take my gaze off the bizarre furnishings. The historic hotel’s directors had given whimsy a free pass with a weird vintage red-lacquered chest of drawers paired with a Danish modern bed.

It hurt my heart to know Marek had been in that bed. With another man.

I should have agreed to my mom’s suggestion of anti-anxiety medication.

Even the couples therapist Marek and I had consulted had suggested it.

Except, she’d wanted to prescribe it for Marek. Not me. What is it about me that makes everybody think I can take whatever shit life dishes up to me? Why do they think I’m so strong?

Why, why, why did he cheat on me? We had a hot marriage. Or so I thought. He kept saying it was him. Not me. Which of course made me think it was me.

For eight years I’d loved him. I—

Share what you thought about Shipwreck Bay and earn reward points.