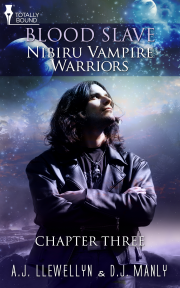 In the third chapter of Blood Slave, nothing on this alien planet is as it appears to be. Danger and death lurk at every turn. Zero discovers new and frightening aspects to Stride, even as he finds himself more and more hopelessly ensnared by the voracious vampire.

Chapter Three sees Zero taken captive in a terrifying underground warren for blood slaves. He encounters a surprising jailer in charge of ‘milking' the blood donors for the vampire queen. Zero seems doomed to a painful fate until he is rescued by Stride.

On the run now from his captors who badly want Zero's blood, the two vampires find deadly traps with almost every step. Even so, Zero alternately resists and embraces Stride's sexual dominance. Becoming lovers finally, their passion rages quickly, but soon turns to panic with their savage jailer hot on their trail. The strange planet on which they have become stranded reveals new and increasingly weird elements, including a huge passenger ship on which they sail to safety…or do they?

Reader Advisory: This book is part of an ongoing serial series, best read in order as it continues.

Zero was in shock. He had been so sure he’d seen a gentler side of Stride, something almost human dwelling in the depths of the vampire. But right in front of him, Stride leapt out of nowhere, lunging at the small boy, who seconds before had held Zero’s hand and now lay dead at his feet.

The child had screamed, the blood-curdling sound quickly replaced by a whooshing, wet, crunching sound as his severed head toppled away. Stride’s raised arms fell to his sides, his sword dripping blood. It made Zero nauseous. The child’s bloodied head bounced on the hard cave floor and rolled back until it wedged between Zero’s booted feet.

This can’t be happening. It made his stomach turn again.

“He was just a child. You’re an animal!” Zero cried out as he charged across the cave floor and hit Stride hard with his body. The impact propelled them both into the water.

In the shallow pool, Zero struggled to push Stride under. Stride refused to be overpowered. He was angry, his eyes glowing blood red as he coughed and sputtered.

“What the fuck are you doing?”

Zero again tried to push Stride’s head down into the water.

“Bastard. You heartless bastard! He was only a little boy.”

Stride reached out and yanked Zero’s body close to his as he fought to keep his head up. This time, Stride spoke directly to Zero’s mind. “Stop this madness, you insane blood drinker... That wasn’t a boy. It was one of my mother’s demons. Take a look!”

Zero struggled in Stride’s arms but Stride held fast. Their faces were now mere inches from each other. Zero could feel the hard definition of Stride’s muscles, the sheer strength of him as he held him prone.

Stride’s eyes changed back to black and he relaxed his hold a little.

Zero turned his head. His gaze went to the cave floor a few feet away. The severed head was surrounded by a well of green liquid, and there were worms crawling in the eye sockets.

Stride was still holding him, and their closeness made Zero recall the way Stride had stroked his own cock when he had been asleep in the tree. That was unsettling. Abruptly, Zero pushed him away.

Stride gave him an incredulous look as he slicked back his long, wet hair. “You didn’t give me a chance to tell you, fool!”

These two never ceasing to amaze, the characters they bring forth are captivating. They provide a riveting story that will have you on the edge of your seat wanting more...