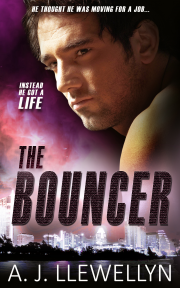 Kevin Branigan thought he was moving to Austin, Texas, for a job. Instead, he got a life.

Kevin Branigan begins a new life in Austin, Texas, working as a bouncer at his brother’s bar. A teacher by trade, he’s had a hard time getting work and is still hurt over a catastrophic break-up. Doing something completely different seems like a great idea, and being close to his brother, Jack, and Jack’s husband, Tito, is another benefit to his changed circumstances.

Things are looking up until Tito intervenes in a drunken fight at the bar one night. Tito stops a patron from beating up his girlfriend, but it could be very bad if news gets out that Tito, a retired boxer, slugged the guy. Kevin takes the fall, and winds up being arrested.

Reader Advisory: This books contains scenes of ménage a trois, ménage a quatre and voyeurism.

Publisher's Note: This book has previously been released by Totally Bound Publishing. It has been expanded, revised and re-edited for re-release with Pride Publishing.

The sign on the portable corridor coming off the JetBlue flight read, Welcome to Austin, Live Music Capital of the World.

It cheered me up after the long, long wait in airports stretching from New York to Long Beach in California, not to mention the turbulent three-hour flight here. I took it as a good sign. I believed in signs. I’ve always looked for them and found them, good or bad. This was good. I loved music, live music in particular, and I was about to throw myself right into the music scene working for my brother.

To me, it was like a personalized welcome mat after being shuttled around the country due to inclement weather. I felt lucky that I’d made it. Seventy-two passengers had agreed to fly all over the country and even to Mexico to finally land in Austin and we’d decided we knew each other well enough to exchange numbers and promises of cocktails.

For several horrible hours, we’d circled first one New York airport, then another, and after a detour to New Jersey, had been left on the tarmac in Newark. Waiting. We hadn’t been able to get to an arrival gate due to overcrowding. In an incident that made all the TV headlines, the flight attendants had run out of food and had rationed us to two peanuts per person and half a cup of water each.

JetBlue had rallied, saving the day. One of their planes heading to Florida had turned around and rescued us. A group of seasoned flight attendants had boarded our craft like the sexiest cavalry you ever saw, stampeding down the aisle carrying food, drink and bringing abundant good cheer. Among them had been my brother’s husband, former boxer and now-flight attendant, Tito Calderon.

He’d picked me out right away and came straight over to me.

To tell you the truth, like everybody else, I’d started to panic quite a long time ago. Especially when I’d seen the news of our unfolding melodrama on the screen in front of me, which of course magnified our predicament.

“I’m fine, Tito.” I’d tried to act macho. Tito was hot. Hotter than hot. He radiated the kind of sexual chemistry that ought to be forbidden in real life. It should be left on the screen for guys whose names end in Clooney or Damon. I wondered how my brother coped with the attention magnetism like Tito’s must bring.

Satisfied I was okay, Tito had given me a couple of bottles of iced water, several snack bags and moved on to help a breast-feeding mother handle her squalling baby.

I’d glimpsed his wedding ring. It made me feel good, for my brother’s sake that he wasn’t the kind of guy who took off his ring when he was a traveling man. I’d caught Tito’s gaze and we’d smiled at each other. He’d taken charge of the screaming baby, handing a bottle to one of our frazzled, original flight attendants.

“Can you warm this for me, please? Thirty seconds ought to do it.”

She’d looked as if she wanted to squeeze the contents all over his face. Instead, she snatched it and thundered her way back to the galley.

I had been able to hear her surly words. “Excuse me. Excuse me, please.”

The new JetBlue crew had made instant TV headlines as they’d escorted us from the plane to one of their waiting buses across the snow-dusted tarmac. Tito had acted like he was used to having cameras on him and I’d wondered just how bad I looked.

Once he’d been sure I was safely on the bus headed back to New York, he’d given me a quick hug. I’d detected very faint aftershave. Holy frickin’ heck. My dick had got hard. Was that bad when it was your brother’s husband?

I didn’t think there was a happy person on that bus once we’d survived the bumpy two-hour bus ride—the driver had got lost—and arrived at La Guardia, just as our original plane was landing.

Another long wait. I wondered if I’d grown chest hair in the interim. The constant flight changes had even worn out the flight attendants who’d left a basket of cookies and snacks up front saying we should help ourselves. I’d tried to focus on reading something on my new Kindle, a gift from my mom. Instead, I’d become obsessed with the choppy digital TV service on my personal screen on the back of the seat in front of me. I’d watched an alarming array of reality programming. Some loopy, scary-looking plastic surgery nightmare of a housewife in Orange County, wherever the hell that was, went off on her husband because they couldn’t afford their mortgage.

The story is about new beginnings, family, and finding love. It's told with elegance, humor, and a deep insight into human nature - all of it: the bad and the good both get exposed for what they are....

The Bouncer was an enjoyable read. I loved Tito and Jack. I was intrigued by Tito's situation and his kids. I have read this author before and would definitely recommend.

Share what you thought about The Bouncer and earn reward points.