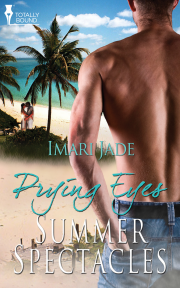 Fashion model Michael Richards has always liked and admired his female modelling partner Amelia Wilson from the moment he first laid eyes on her. Amelia is the girl next door with the peaches and cream complexion, the type of woman you wanted to take home to meet your parents and nicest person you ever wanted to meet.

But curious by nature Michael feels that there is something not right with this picture. No one can be this perfect and he is bound and determined to find out what truly makes Amelia tick. So when the chance comes up for the two of them to travel to the Bahamas for a photo shoot Michael quickly volunteers to drive the two of them to Florida to board the airplane, figuring a few days in his company is either enough to bore Amelia to tears or get her to shed a bit of her inhibitions.

Amelia Wilson has a dirty little secret and the last person she wants to find out about it is her partner Michael Richards.

Michael is cultured, refined and drop dead gorgeous with all that blond hair and mesmerizing green eyes. What would he think of her if he knew that she had a thing for watching people making love? Or if he found out that she got turned on by watching dirty movies? Would he be so anxious to fly to a tropical island with her to get to know her better? Or would he toss her out of the car and tell her to get back to New York the best way she can?

Maybe I should turn away, Michael Richards thought as fellow model Amelia Wilson tried to hide behind a bush to pee in the middle of nowhere in Florida with the nearest rest stop about twenty miles away. Nice panties, he noted. White and lacy. There was something about a long-legged squatter that turned him on.

“Don’t peek,” Amelia shouted to him.

Too late. His eyes were already zoned in on her. The hot steamy liquid hit the grass making a hissing sound like a snake. Michael thought what a funny story that would make if a snake actually did slither by her at that very moment. Amelia was the type that would forget to pull up her panties and just try to run away from the snake. He continued to watch her from his position, leaning against a tree, imagination running wild, erection rising in his pants and in no hurry, whatsoever.

Amelia rifled through her purse for a tissue. Hopefully she’d find a place to dispose of it instead of littering. She bent from the waist and pulled up her panties. “You’d better not be peeking.”

He caught a glimpse of her melon-sized breasts straining against the neckline of her dress as she bent over. “Oh shit,” he moaned as his pants got tighter. At this rate, he was going to come inside his briefs if she didn’t hurry up and finish.

“You are such a prude,” he told her. It was hard to believe she was one of America’s hottest models. Sometime in her seven-year career she must have taken her clothes off in front of someone. So why was she making such a big deal?

Amelia came out of the bushes just seconds after he turned away and faced the highway. “I’m ready.”

So was he. Ready to get off, that was. Michael glanced over at her. Amelia looked exquisite as usual with her tall, perfectly proportioned body and thick shoulder-length chocolate brown hair. She was casually dressed in a pretty blue frock, probably bought off the rack, even though, like him, she probably had hundreds of designer outfits in her closet. She reminded him of the girl next door—peaches and cream complexion, wholesome personality and an I get along with everyone attitude. A cheerleader, homecoming queen and girl you would certainly like to take home to meet the parents.

Michael sighed. All of that was fine and dandy but somewhere in his vivid little imagination he knew no one could be that perfect. Amelia had to have some kind of quirk, and he was bound and determined to find out what it was before he did a damn fool thing like propose to her. That’s why he’d suggested that they drive to Florida instead of flying. After a day or two on the road together some little idiosyncrasy was bound to rear its little head. So far he’d learnt that she liked Latin music, she couldn’t hold her bladder after drinking soda and she was thinking about auditioning for a small part in a movie when they returned to New York.

Michael helped her into the fancy red sports car he had rented for their trip then walked around and got into the driver’s seat.

Amelia smoothed out the creases in her dress, adjusted the top to cover the little skin that was showing then flipped her hair over one shoulder so she wouldn’t lean back on it.

Michael watched it all with interest, envisioning her naked, reclined on the seat next to him. He started up the car and peeled away from the side of the road to get back on the highway. They were headed to the airport where they would finally board a plane and take off for Kamalame Cay, a private beach in the Bahamas. Both of them were taking part in a big promotion for a new line of summer wear designed by Ralph Newman to be featured in several department stores around the country. He had high hopes of seeing a lot of Amelia during their one-week stay, since he’d learned that she would be modelling Ralph’s latest swimsuit fashion. Michael grinned inside. Boy, he couldn’t wait.

Amelia pushed her key card into the door of her bungalow and stepped into her room, dragging her luggage behind her. She flipped on the light and gawked. “This place is gorgeous.” She shut the door soundly behind her and locked it, pulling the luggage through the living room and into the bedroom. She turned on the light then rolled the luggage over to the closet and left it there. Amelia yawned. She could sure use a nap after the long flight. Later she was to meet up with Michael and the rest of the models for dinner, but right now all she felt like doing was resting.

Amelia walked over to the patio window to draw the curtains. She stopped, gazing at the fantastic view of the turquoise blue waters and the white sandy beach. Michael had told her about the view before they had left New York, but she’d thought he was just exaggerating. She reached for the cord and was about to pull it when she heard a feminine giggle, followed by a masculine, “Come here, baby.”

Amelia had a thing for guys with deep voices and just had to see if the face matched the voice. She peeped from the right side of the drapes so she wouldn’t be spotted. “Eek,” she said, slapping her hand across her mouth. “He’s naked.”

Share what you thought about Prying Eyes and earn reward points.