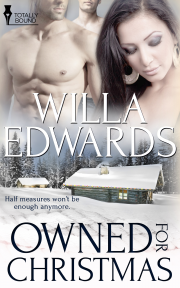 Christmas with her boyfriend’s family seems like a lovely idea—until she finds her previous Dom staying for the holidays too.

Although she had no idea that Grant and Daniel were brothers, Grant revives all those needs that Daniel can’t fulfill. But she won’t give up the man who helped mend her broken heart after Grant shattered it—even if she has to bury the submissive part of herself to do it.

A year ago, Grant Farrell left the woman he loved—and the best sub he’s ever controlled—to tend the family ranch after his father’s death. It almost tore his heart out to leave Kate but he had no other choice. But he doesn’t realize how much it hurt them both until she shows up at his family’s home on his brother’s arm.

“Are you sure your mom will like me?” Kate threaded and unthreaded her fingers together. The snow-covered Rocky Mountains filled her passenger side window. The ground crunched under their tires, illustrating that they weren’t in Texas anymore—that and the sub-zero temperature.

When her boyfriend had asked her to spend Christmas with his family in Colorado, she’d been ecstatic. Now she was rethinking her decision.

She stared out of the window, focusing on breathing deeply. The last thing she wanted was to have a panic attack the second she walked into her boyfriend’s childhood home. What a great first impression that would leave. For years to come, she’d be known as the crazy girl he brought home that one Christmas who stopped breathing right inside the front door.

Daniel pulled his hand from the steering wheel and reached across the car for hers. He gave her fingers a gentle squeeze. “I’m sure she’ll love you.”

She nodded and tried to believe him. It had been a long time since she’d met anyone’s mother. She’d stopped being the type of girl a man would take home to his family a while ago. She had never thought she’d be back in this position again.

That was until Daniel had appeared in her life. She looked over at the man sitting beside her. He’d glance at her with his warm, honey-brown eyes every once in a while. He’d combed his sandy hair back neatly. He was her savior. He’d found her, picked her up and helped her to glue her heart back together when she’d given up any hope that it was possible. The least she could do for him was meet his mother.

“What is there about you that’s not to love?” He smiled over at her.

There was a lot not to love. There certainly had been before. Enough to force someone to leave her. Or at least one very notable person. The one who had broken her heart and left her behind to pick up the pieces.

But that was all before Daniel. She tried to smile back.

They took a left turn, pulling off the highway onto a winding dirt road. Snow, a few inches deep, was piled up on either side of the road. White blanketed the trees and rocks. The car shook and dipped down the bumpy road. She braced herself against the car seat. This was a long way from her normal commute to school each morning. She’d never complain about Dallas traffic again. At least it didn’t have potholes the size of cannonballs, or ice.

“Trust me. It will be great. We got through the plane ride, didn’t we?”

Kate nodded. She had survived the plane ride. Thanks in part to Daniel and two mini bottles of vodka. But somehow, she’d lived through the flight. Her hands had even stopped shaking. “Of course I trust you.”

Daniel turned another corner, shifting onto an unpaved drive. It was hard not to notice the house so covered in twinkle lights it could almost be seen from space. It was beautiful. The quaint, tiny farmhouse sat nestled back into a hill. With the snow covering its roof and the lights decorating the porch, it almost looked like the front of a Christmas card. The kind she would have found and looked at longingly as a child from her Dallas bedroom.

If only she could stop her stomach from churning, she might be able to enjoy the sight.

Daniel slowed the vehicle before parking the rental car to the left of the small house.

“We’re home.” He grinned over at her.

Kate took a deep breath. He looked so happy, so excited. Her stomach churned more violently. She wished she felt the same as he did.

He scrambled out of the car toward the back to get their bags. Kate opened the door, stepping out into the cool air. Her boots squished in the snow. Good thing she’d gone for the heavy winter coat. She’d never seen so much snow in her life, besides on television. The bitter wind brushed her face and her nose burned slightly. But the snowfall was pretty, decorating everything in white and ice.

Daniel slammed the trunk before coming to meet her beside the car, a bag cradled under each arm. Always the gentleman. Just another reason she loved him so much.

“Don’t tell me it looks that bad,” he joked, a wide smirk on his face.

Kate tightened her coat around her chest, schooling her features into a more excited expression. She’d hate for his mother to see the dumbfounded look she must have been sporting. She didn’t want to give his mom the impression she was judging them, or that she was disappointed in what she found—she certainly wasn’t.

She didn’t think his childhood home looked bad at all. In fact, the little house in the snow was very pretty and picturesque. So different from her parents’ house, so different from the Christmases she’d always known.

Share what you thought about Owned for Christmas and earn reward points.

Are you a plotter or a pantster?
I think of myself as a combination of the two. I go into each story with a basic idea of what’s going to happen. An outline really. (Though I rarely put it on paper until I’m halfway through writing the story). But I still give my characters tons of room to play and explore. And if they get off the map, that’s fine. We just have to find our way through the new course together.

In my newest release, Owned for Christmas, my heroine deals with accepting her true self and what she really wants. I think this is something we all struggle with. I know I have.  For Kate, she has trouble accepting her submissive side, after being hurt by her former Dom, she wants to walk away from the BDSM scene and never look back. But it is only with Grant’s help—the same Dom who hurt her—that she comes to realize she can’t just walk away from that part of herself. She has to accept and love herself for who she truly is.