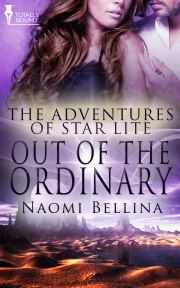 Out of The Ordinary

Book 1 in the The Adventures of Star Lite series

Danger, magic, lust and love come together in this tale of Star Lite, an unusual woman with an extraordinary talent for magic and love.

After a devastating fiasco on her wedding day, still-single Star Lite longs for peace and quiet to nurse her broken heart. Instead of the uneventful summer vacation she has planned, she's transported to a strange planet with even stranger inhabitants, and an irritating but sexy man named Adam who claims he's a magician.

Star senses danger in this place, and her suspicions are confirmed, as the two humans witness a bizarre display of power from a mad king. They form an uneasy bond and work past their differences as they look for a way to escape, and attempt to reason with two sensuous pixies, who try to protect their ruler.

When the king makes a foolish decision, danger threatens the entire planet. Not one to give up without a fight, Star reluctantly agrees to a sexual experiment, discovers her untapped powers of magic, and opens her heart to the possibility of love.

Out of the Ordinary

Heaving a sigh of relief, Star slammed her desk drawer closed. Another school year over, and not soon enough to suit her. This term had seemed to drag on longer than the previous one, and the previous one had crawled slower than the one before. Star did not like this trend. Was life going to continue like this, until one September she woke up screaming, refusing to get out of bed? This year she had a good reason to be depressed, but even without that additional agony, the joy of teaching was slowly fading.

She still enjoyed her students and loved making a difference in their lives, but each year that task became more difficult. There was less money in the budget to spend on necessary supplies, and more demands on the teachers’ time for administrative work. Each child was receiving less personal attention, and standardised testing was changing the way teachers taught—and not for the better—in her humble opinion.

Every year she pondered her future, and this year it looked especially bleak. She didn’t know what grade level she would be teaching next year, if at all. Rumours of layoffs flew fast and furious. Scooping up her purse and the box containing the last remnants of desk junk, Star took a last glance around then walked to the door. She made it halfway across the room when the door opened.

An odd-looking man stood in the corridor. He was tall, thin and pale, and his shirt and pants hung on his body like garments on a clothesline. His skin was pure white, almost transparent. Star tried to place him as a parent but failed. She opened her purse, instinctively reaching for pepper spray. There were others in the building and no reason to suspect danger, but better safe than sorry. The stranger entered the classroom.

"Ms Lite?" he asked in a surprisingly deep voice.

Star had expected more of a dry whisper to come from his skeletal frame.

"Could I speak with you for a moment? About my son."

Well, hell. Star badly wanted to say no and go home. She was convinced this man wasn’t the father of one of her current pupils, and if his son was due to be with her next semester, she would rather wait until then to start parent-teacher talks.

"I have another appointment to get to," she lied. "Could this be taken care of via email?"

"I’ll only take a moment of your time. Could we sit?"

Placing her box of junk down with a thud, Star sat in a student desk and gestured for the man to do the same. They weren’t built for an adult—certainly not for someone of his height—and she hoped his discomfort would shorten the conversation.

"I’m Curtis Smith’s father," he said, offering a large hand for her to shake. "He was in your class last year. He spoke very highly of you."

"And how is Curtis?" Star asked, racking her brain, trying to remember a student by that name.

"He’s fine. He’s with his mother now. I saw him recently and he asked me to give you this." The man produced a small glitter-covered box. "Curtis said you helped him a great deal with his studies, and he never properly thanked you. He wanted you to have this as a token of his appreciation." The man stood. "Thank you for your time, Ms Lite." He gave her a wan smile and exited the room.

Star sat for a moment, not quite sure what had just happened. It dawned on her the man hadn’t given his name, just his son’s. Curtis Smith rang a bell, but she couldn’t picture him. He must not have been a troublemaker or an exceptional student. So many students passed her way, she had a difficult time keeping track of them all, no matter how hard she tried.

Grabbing her junk box once again, Star headed for the door, relieved the encounter had been brief. Weird, but brief. She would look up Curtis Smith when she got home, but right now getting out of this building before anyone else waylaid her was the priority.

Her interests include dancing, hula-hooping, drumming, and creating healthy meals. She takes the opportunity to play, have fun, and indulge in the pursuit of passion whenever possible. She hopes you enjoy her stories and would love to hear from you at naomibellina@live.com . Visit her website at www.naomibellina.com

Her motto: Never pass up the opportunity to have an adventure!

Share what you thought about Out of The Ordinary and earn reward points.