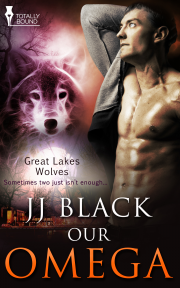 Noah Steele is a broken man. Though born a strong, confident Alpha, the torture and betrayal he experienced by order of his own father have left him a shell of the man he once was. Still gripped by the fear left in the wake of his trauma, he no longer trusts his instincts or his ability to lead. Shamed, he hides himself away, even from the mate he longs to claim as his own.

Dax Marshall needs some downtime. Between protecting the Pack in his role as Beta and leading teams to search for more of Alpha Steele’s facilities, his responsibilities are starting to overwhelm him. If only he could find the one person destined to soothe both himself and his wolf.

Between dominant wolves, power struggles are always an issue. Time and patience will be needed to make their mating work. Unfortunately, time is in short supply. New information has Dax, Noah and a team following a lead to a breeding facility—and much more. Among the prisoners, they find an abused young man who calls to them both in a way that neither of them understands.

While they scramble to adjust to fate’s curveball, more information comes to light showing just how far Alpha Steele is willing to go in his quest to rule the Packs. Will their new happiness withstand the madman’s plans or be destroyed by the malevolence of his ambition?

Reader Advisory: This book contains scenes of ménage, scenes of sexual abuse and mentions of forced reproduction and rape.

Publisher's Note: This book is part of a series and should be read in order.

Noah jerked awake in a panic. Skin slick with sweat and panting for breath, he struggled to calm his racing heart as he scrambled to remember where he was. Blinking against the brightness of the room, it took him a moment to make out the rich earth tones of the room around him. Relief rushed through him. It was his bedroom at the Grand Rapids Pack House. Thank God.

For months, it had been the same thing. Night after night, he was dragged away from much needed sleep and forced to relive the most traumatic experience of his life. It had gotten so bad, he was no longer able to sleep in a bed. It left him feeling too vulnerable, too exposed. Now he spent every night sleeping in a chair by the window. It was the one place he felt secure enough to risk a loss of consciousness. At least this time he’d made it through the night. A soft, golden light glowed through the trees and in through his window. He drew in a deep breath and turned his attention outward in a desperate attempt to calm his frazzled nerves.

A pair of mourning doves cooed to each other softly from the eaves of the house. Looking outside, he took in the clear blue sky of a beautiful, cloudless day. There was a gentle breeze moving through the trees caused their branches to bob lazily. With his eyes closed and his face tilted up to the sun, Noah could almost pretend he felt the light kiss of air teasing against his skin in a gentle caress. The phantom draft would tickle up the length of his arm and…

The sound of a door slamming down the hall snapped him out of his musings. He didn’t bother to choke back his sigh of frustration as he glared at the door. He wanted to ignore it, hoping that whoever was outside would eventually assume he was out and go away. Company made it hard to wallow in misery. Unfortunately, solitude was not something easy to come by in his new, temporary digs.

With Eli being mated to the Alpha of the Grand Rapids Pack, and Noah now being homeless, he was squatting with the local wolves until they were able to figure out his father’s master plan and stop him. While he was grateful for their hospitality, it was difficult for him to be surrounded by so many people. Shifters were a very tight knit, affectionate group of people. As a man who could no longer stand to be touched, Noah lived in a constant state of caution. It was exhausting. When the knock sounded again, he knew the gig was up.

“For God’s sake, quit knocking and come in already!”

“It’s about fucking time. I thought I was going to have to break down the door.” His brother Eli loped into the room and dropped down on the bed like he owned the place. Since he was mated to the Pack Alpha, he kind of did.

Noah scowled at the thought. “I’m busy, E. What do you want?”

Eli scoffed. “I can see that. Ending global warming and creating world peace, are we? I came to see if you wanted to go for a run. You haven’t shifted in months, and I’m itching to get out and stretch my legs. What do you say?”

“Come on, Noah. It’s a beautiful day and it would be good for you to go outside and get some fresh air.”

Jumping to his feet, Eli stormed over to where Noah sat, glowering darkly. “This is bullshit, Noah! We’ve let you stay locked up in this godforsaken room for the last few months, only coming out for meals or after everyone else has gone to bed, hoping that you would eventually snap out of this funk on your own. It’s clear to me now that’s not going to happen. You’re my brother, and I miss the hell out of you. The time for coddling you is done. If you won’t do it on your own, I will drag you out of this room kicking and screaming.”

“Is that so?” Noah snarled, his body taut and ready for a fight. “You think you’re strong enough to force me to do anything I don’t want to do?”

Eli’s complete disregard for Noah’s Alpha status had his wolf bristling inside him. Brother or no, his wolf didn’t like the challenge he saw in the younger man’s eyes.

“Try me.” With his arms hanging loose and ready at his sides and a defiant gleam in his eyes, it was clear that Eli meant business.

“I think being mated to the Pack leader may have gone to your head,” Noah sneered. “You don’t rule over me, Alpha mate.”

“I’m not trying to rule over you, asshole. I’m trying to look out for you. Can’t you understand that? You are my brother and I’m worried about you. Please, let me help you.”

Noah sighed and scrubbed a hand down his face. “E, I get what you’re trying to do here. Really, I do. I appreciate the thought, but I just can’t.”

“Why, Noah? I want to understand.”

Noah looked away and found himself faced with the same four walls that had been both his salvation and his prison for the last three months. Ever since the day the Grand Rapids Pack had rescued him from his father’s deranged Beta, Carl Yager.

Just the thought of his time spent with Carl had Noah breaking out in a cold sweat and shaking like a junkie looking for his next fix. “You wouldn’t understand.”

“Give me a chance, Noah. I might understand more than you think.”

“He made me weak, E!” Noah snapped, his chest heaving. “That bastard nearly killed me, and there was nothing I could do to stop him.”

Eli’s expression softened. “Noah, you had no idea that Alpha Steele was insane enough to send Carl after his own son. He should never have been a threat to you. Carl had no honor. He never would have bested you in a fair fight so he used your trust against you. He was a coward.”

“None of that matters, Eli. I’m an Alpha. I’m meant to protect and lead the Pack. Shifters respect strength and control. Carl was able to strip me of both. How can I face the Pack, shamed as I am? I know I deserve it, but after everything else, I can’t stand to see their looks of pity and disgust. I would rather spend the rest of my life in this room than face their scorn.”

“That’s crap, Noah,” Eli spat. “What you say might be true of the Mason Pack, but the Grand Rapids Pack is nothing like that. If you ever left this room and got to know people, you’d see that you’ve already been accepted as a member of the Pack. Everyone has been worried about you. Every day I have to fend off questions from Pack members about how you’re doing and when you might feel up to having visitors. I think you may have a secret admirer or two, based on the amount of food and gifts that have been left outside your front door over the past few weeks. What you did for me and for this Pack is something we’ll never be able to repay.”

Noah scoffed. “I didn’t do anything except allow myself to be captured and tortured by a psychopath. Big help.”

“Are you kidding? If it hadn’t been for you, we wouldn’t have had any clue what Alpha Steele was up to. Who knows how long it would have taken us to figure out what was going on?” Eli reached out and placed a hand on his arm. “Carl was coming for me, Noah. Without your warning, Kellan might not have ever found me. He wouldn’t have even known where to look. Whether you believe it or not, you saved me. You need to move past this and start living again. You have people here that care about you…more than you probably realise. We want you back.”

I loved this book, so much that it caused me a sleepless night because I didn't want to put it down. I like to read shifter books, I have found this series very different from others I have read. Noah...

Abundant emotional drama and multiple layers to the storyline Our Omega guarantees a stunning story and delivers.  A large cast of intriguing characters, a well thought out plotline, and angst a...

Share what you thought about Our Omega and earn reward points.

Three books on my keeper shelf:

Acrobat by Mary Calmes. I love the way Dreo and Nate came together, not just because of mutual attraction, but because of the love they had for Dreo's nephew. It wasn't just about a couple falling in love, it was about becoming a family.

Other books in the Great Lakes Wolves seriesView Series Page