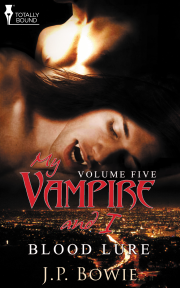 My Vampire and I: Vol 5 PRINT

Book six in the My Vampire and I Series

Jared Lantos and Andrew Berés—two vampires, once lovers, now foes, struggle to find love and forgiveness while battling those who would keep them from ever trusting one another again.

While awaiting to be tried for the murder of a fellow vampire, Jared Lantos meets Joey Ryan, a young mortal, and is immediately drawn to him. Despite his conviction that the life of a loner is what he craves, Jared finds himself falling in love with Joey. The loving bond between Jared and Joey is strengthened when Jared cures Joey's father of his dementia.

Meanwhile, Andrew discovers that the accusation of murder he'd brought against Jared was false, and seeks forgiveness from his one time lover. While in LA, Andrew chooses Tommy Cordain, a young fireman, to satisfy his need for blood, but against his better judgement, he is unable to forget the attractive young man. When the real murderer targets Andrew for the 'final death' by setting fire to the hotel where Andrew is staying, Tommy rescues him, and Andrew is forced to have him remember their shared night of passion.

Believing they know who the real murderer is, Jared and Andrew confront the person, but the truth when revealed, is even more terrible, and could threaten the lives of their friends and lovers.

Jared Lantos was in a hurry. He had promised his father he would attend that evening's meeting of the Elders, and he was late, or was going to be late if the damned carriage driver didn't get a move on. Truth be told, he hated the meetings, and only attended out of familial duty, added to the fact if he didn't show up, his father would rant on for hours about dereliction of duty and insubordination, ad nauseum. If only to spare his mother those tantrums, Jared attended the meetings as often as he could.

Jared was a lawyer, and a busy one, something his father had yet to understand. Janos Lantos had never quite grasped the idea his son had important clients who just might need his services more urgently than an Elder meeting.

Elders, he thought grimly. An arcane society that had no place in modern Hungary. A group of men who dabbled in the black arts, who gave all their time and money to the furtherance of communing with the dead, and as far as Jared knew had not once conjured one spirit. He shook his head in frustration. Another wasted evening lay ahead, listening to nonsense, watching the old codgers nod sagely as if they understood every silly word spoken. Surely they did not believe every worthless spell and incantation cast by the Head Elder, whom Jared considered no better than a street hawker of tawdry baubles, would actually bring forth good fortune for all present, arming them with magical shields to ward off those who would do them harm. Yet, sadly, Jared knew that was exactly what they did believe, his father included.

Ah well, tonight would be the last time he would attend one of these asinine affairs. It was his intention to inform his father that, as of next month, he would be moving to Budapest to take up a position as a partner in a larger law office. A far more prestigious company than the one in which he was presently employed.

He stretched his long legs out in front of him and gazed at the passing scene from the carriage window. The open window brought in a warm breeze that ruffled his long golden hair. He glanced at his fob and sighed. Yes, he was late, and there was little he could do about it. The carriage shuddered, throwing him to one side as it came to an abrupt halt.

"What is it, cabbie?" he yelled, straining to see what had caused the sudden stop.

"Body in the street, sir"

A body? He climbed down from the carriage and walked towards the small crowd gathered around a prone figure on the ground. The victim looked to be young, a young man, his clothes of a decent cut and material. Not a vagrant then?

"Is he dead?" he heard someone ask.

"Looks like it," came a reply. "Just waiting for the militia."

"No one's safe these days."

Jared suddenly felt as though he were being watched. He looked around the assembled crowd and caught the eye of a tall, handsome man who smiled at him and raised a hand to the brim of his hat in salute.

Do I know you? Jared wondered, returning the man's smile. Perhaps they'd met at one of the many business soires he'd attended recently, but surely he would remember one as comely as this. The man moved towards him and touched him gently on the arm. A visceral thrill coursed through Jared's body at the man's touch.

"We"re not needed here," the man said, steering Jared away from the crowd and into a darkened alleyway. A door opened, and they stepped inside. A long hallway stretched before them, dimly lit with a faint pinkish glow, and lined with several doors. "Here" The man pushed open a door and stepped aside to let Jared enter. Jared did so without thought, without fear, even though he found all this to be very strange. A tiny prickle of excitement, of anticipation, coiled on the nape of his neck.

The man removed his hat and cloak, signalling that Jared should do the same. As if in a blur, he was suddenly standing so close Jared could taste the man's sweet-scented breath on his lips.

"I have need of you, my beauty"

Share what you thought about My Vampire and I: Vol 5 PRINT and earn reward points.