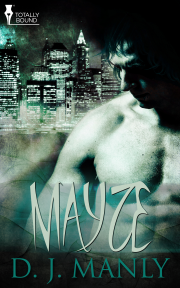 Jas' joy of being reunited with his sister is short lived when one night she is murdered by a madman, a madman his foster brother claims is a vampire.

Sent out on a mission to find a monster, Jas meets Mayze, and he's like no one he's ever met before.

Is he the monster who killed his sister, or could he just be the answer to his prayers?

Reader Advisory: This story has been previously released as part of the Sins of Summer anthology by Total-E-Bound

From the final pirouette to the grand jet�, Magda's attention never wavered from the scene in front of her eyes. It had been like watching a child surrounded by treats in a candy store. It was all so good that in the end you never really end up choosing.

Jas placed an arm around his older sister as they exited the theatre and walked out onto Sixty-Third Street. Columbus Avenue was bustling tonight, the weather glorious—warm with a subtle, soft breeze that prevented the heat from being oppressive.

The home of the New York City Ballet, the David H. Koch Theater, was one of three theatres located on the over-sixteen-acre Lincoln Center Campus in the city's west end. Magda had always loved ballet but had never before had the chance to actually see one.

In the early nineties, when the war over independence had erupted in Bosnia, Jas was only twelve years old. Magda had been sixteen. Given that Bosnia's male children seemed to be more of a target than females, his parents feared for Jas' safety. At the age of thirteen, his parents sent him to New York City to live with his father's cousin, Adel, and her family.

It had been a tough decision for the family. The decision had not been made in haste, and his parents had changed their minds several times about sending him to New York. Jas remembered how angry he'd been at being sent away. He hadn't wanted to leave his family. The night before he'd actually left, his sister had sat up all night, quietly talking to him. She'd convinced him that it was the right thing to do and that soon they'd all be together again.

A few years later, eight thousand boys had been murdered by Serbs, helping to turn the tide of the war...and convincing his parents they had made the right choice in sending him to America.

Adel had always felt badly that she couldn't take in the entire family, but Jas' father had truly felt he had a duty to stay and help defend his homeland and wouldn't have left anyway.

His father had died in the conflict just before it was all over, and his sister—who wrote to him constantly, longing to come to America—had stayed behind to look after their mother, whose health declined rapidly after their father was killed.

Finally, two years ago, his sister had arrived in America. After their mother had passed away, they'd talked about it while Jas was home for the service. Magda was so excited. She'd been learning English for a few years in preparation and they always spoke English on the phone and exchanged emails in that language.

But when they saw each other at the airport five years later, Magda spoke to him in Bosnian, "Jasminko, zdravo, ja sam sretan sada."

"English, English, sister. You are in America now...and I am happy too." They'd held on to each other for a long time—all of the memories and loss filling them both for a few minutes—before they broke apart.

Jas had known things would be different now. Finally, Magda could leave the past behind her, too—as he'd already done.

It had taken a while for his sister to be able to address him as Jas. He didn't use Jasminko anymore. It was too long a name and people had problems pronouncing it. Not to mention, they always wanted to know what kind of a name that was. He'd have to explain where he was from, and that brought up a past that he didn't like talking about.

"You are so American," his sister had laughed at him as he'd driven her home from the airport that day.

She was right, of course. He'd been in the US now for almost eighteen years. Many things had changed in his life since he'd left Bosnia. His mother's cousin had been an Adem. Her father had been the oldest in the family, and he'd always wanted Jas' father to come with him to America. His father, however, had been very proud of his homeland, always believing he could make it better. Jas couldn't help thinking how different everything would have been if his parents had taken Magda and came to America before he was born. Maybe his parents would be alive today.

Share what you thought about Mayze and earn reward points.