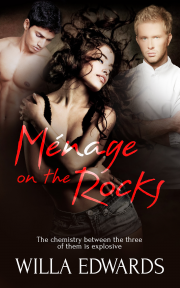 Ménage on the Rocks

Take two stubborn people, add another determined to make them all happy, mix in a creative use of chocolate and you get one hot Ménage on the Rocks.

As manager of the Rockshore Tavern and Grill, Stella Matthews has to deal with a lot of difficult personalities. But none are more difficult than the Rockshore’s demanding chef Ozzy DeMeer. Luckily, she has her boyfriend Raj Anand—the Rockshore’s most popular bartender—to keep her sane.

But when Raj suggests that maybe the reason she and Ozzy are so combative is because they are attracted to each other, she doesn’t know what to say, but no, no, no. NO! Not easily convinced, Raj approaches Ozzy with a special proposal and together they hatch a plan to give Stella what she really wants—a hot man sandwich—even if she doesn’t know it yet.

The chemistry between the three of them is explosive. But when fireworks in the bedroom turn into even bigger fireworks at the Rockshore, Stella walks away, unwilling to risk her reputation and position for a little bit of fun. Can two determined men convince her that love is worth the risk? Or is their blissful ménage determined to hit the rocks before they’ve even started?

“What is it this time?” Stella glanced toward the waitress at her door.

As manager of the Rockshore Tavern and Grill, Stella dealt with a lot of difficult personalities. That was just how it was in Rockshore, Maine, where the elite came to enjoy summers away from the big cities. But the look on Megan’s face showed it could only be one particular personality who would be a thorn in her side today. Ozzy DeMeer, the critically acclaimed chef the owners had forced her to hire. Critically acclaimed pain in my ass. Since the day the man had arrived he’d been nothing trouble. Today wasn’t shaping up to be any different.

“It’s…” Megan tapped her Easter egg-blue nails against the knob. “One of my customers made a substitution.”

Stella fought the urge to scream. Substitutions. If she could get back all the time she’d spent fighting Ozzy over substitutions she could write the book she’d been dreaming about since college, or at least get out of this damn office before three in the morning.

“Did Ozzy refuse to make it?”

Megan looked up at her with big eyes. “I didn’t put it through yet.”

These chicken-shit college girls they hired for the summer rush. If they didn’t need the help so bad she’d never hire another one.

“What do they want to substitute?”

Megan twisted her blonde hair around her finger. “They want cheddar on their grilled cheese.”

Now Stella understood why the girl had come to her. After Ozzy had sent two flaming—literally—grilled cheese out to a customer who had wanted Gruyère, the whole staff avoided the dish altogether.

A few feet from the kitchen, the air filled with the smell of the Rockshore’s renowned food. Ozzy might be an asshole sent to destroy her life, but he could cook. The Rockshore was seeing profits, no matter how much she loathed to admit it. And outright refused to acknowledge in his presence.

Five-star reviews were no excuse for Ozzy’s behavior.

Stella stepped into the room with as much confidence as possible. The kitchen was loud and frenzied. People walked around the room chopping and searing. Fire and steam spewed from every corner.

In the center of the room Ozzy drizzled a dark liquid over a plate of rare steak, his sandy blond hair in disarray. Spots decorated his white coat. Yet stress didn’t slump his shoulders, he appeared vibrant. He got off on the chaos of the restaurant. That was the only way to survive this kind of life.

A worn-down Ozzy would have made a much easier target.

“Ozzy, we need to place an order for table fifteen. One of your pear and balsamic grilled cheeses with cheddar.”

The whole kitchen froze, salivating over the possibility of another battle between them. Being the restaurant entertainment was not her preferred method of management, but when all other roads failed, she used whatever means necessary to get the job done.

“What do you mean ‘no’? It’s what the customer wants.”

Ozzy shook his head before moving on to the next plate. “The customer is an idiot.”

Another reason why chefs stayed in the back, away from people. Tableside manners, he did not have.

“The customer is not an idiot. They know what they want and they’ve asked for it.”

Ozzy turned to her, his bright blue eyes flashing with mirth. The corners of his lips turned up in the smile of a man who believed he knew everything. The urge to punch him rushed through her.

“The customer may think they know what they want, but I’ve spent years studying food. Developing the exceptional palate needed to create a fantastic menu. That customer is an idiot if he thinks he knows more about food than I do.”

Rolling her eyes, Stella fought back the impulse to reach across the kitchen and strangle him. If anyone sounded more pompous than Ozzy talking about his food, she’d never met them. “I don’t care if the cheddar doesn’t look right with the apples, or doesn’t pair well with mango.”

“There is no mango or apple in my food,” Ozzy mumbled, not quite under his breath. “Apples aren’t even in season.”

“Our customers want a brilliant meal with perfectly paired and cultivated tastes. This restaurant has a century-old reputation to uphold.”

She shook her head. “No, this particular customer wants cheddar with your apricot jam or whatever it is.”

“And this customer will get what they want. Is that understood?”

Ozzy folded his arms across his chest. He stared her down, probably waiting for her to flinch. Stella held strong. She’d never been much of a flincher, especially when it came to irritating asses.

“I’ll find someone else to cook the sandwich.” It was a bluff, at least partially. It wouldn’t be easy to find another acclaimed chef this far into season. But it was a challenge she was more than up for if he continued to undermine her authority.

“Thank you.” She turned on her heel, heading back toward her office before the smile broke out across her face. She didn’t want to be smug. It just happened around Ozzy.

“You know, some day, someone will teach you a lesson. They’ll take you down for stuff like this.”

“Luckily, that’s not today.” She pushed the doors open, exiting the humid kitchen. Lucky for me and my cheddar-loving customer.

Share what you thought about Ménage on the Rocks and earn reward points.