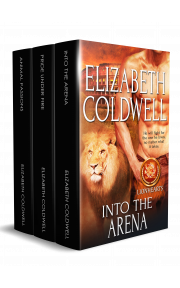 He will fight for the one he loves, no matter what it takes.

Cesare Bianco is a shifter without a pride. Exiled from his home town of Padua after losing a leadership fight to his corrupt, self-serving uncle, he travels to Rome in search of a new beginning. A chance meeting sees him taking a job on the catering crew of a Hollywood blockbuster. When he meets the movie’s handsome lead actor, Hayden, he knows he’s in the presence of his mate. But Hayden is human. Even though he offers the possibility of lasting love, Cesare must fight all his instincts to make it happen.

Hayden Skarz is on the verge of the big time. Landing the lead in sci-fi adventure Thrown to the Lions has put him on the road to stardom. Filming in Rome is a difficult new challenge for him, though being around Cesare, the hunk who works in the catering truck, makes his job much sweeter. Sex between them is passionate and wildly inventive. But Hayden has a stalker, who’s tired of being ignored in favor of other men. When what started as a crush turns into murderous obsession, can Cesare help Hayden make it off the film set alive?

Will their passion burn out of control?

Connor Wabsik’s career as a firefighter is on the line after he punched out his commanding officer. Redemption is possible in the form of a move to a sleepy California mountain town, but it will mean leaving his old life behind. What he doesn’t know is that his destiny waits for him in Riesgo. Fate has paired him with a human mate, Andy McGuire—a man with secrets of his own. Connor is fighting to protect the town from a dangerous firestarter. When Andy’s life is threatened, will Connor be able to keep him safe, too?

Detective Andy McGuire is unlucky in love, but when he meets Connor, the handsome new recruit to the Riesgo Fire Service, things start looking up. How can he stop a serial arsonist from destroying everything he holds dear? And as passion threatens to burn out of control between him and Connor, what will happen when Andy learns that the man he loves might not be what he seems?

He’s destined to meet his mate on a killer vacation.

Horror author Mason Wells is having a midlife crisis. He’s burned out as a writer and he keeps falling for guys who are way too young for him. So when his agent, Nora, arranges a birthday getaway for him and a few close friends in the Spanish Sierra Nevada, it’s just the break he needs—until Nora is found drowned in the hotel swimming pool. It seems like someone has a hit list of victims, and Mason’s on it. Can the hotel’s gorgeous owner, Xavi, step in and keep Mason safe?

Lion shifter Xavi Bianco loves the peace and solitude of his boutique hotel in the mountains. It’s a shame the place still holds the memory of his ex, Ramón. When the group of brash Americans arrives for a vacation, he doesn’t expect to find himself falling for one of them. But everything tells him Mason Wells is his destined mate, bizarre as it may be, and when Mason’s friends fall victim to a series of horrific attacks, Xavi knows he must do everything to protect Mason, even if it means risking his own life…

Reader Advisory: These books contain scenes of violence and peril, as well as some scenes of bondage.

He had the most beautiful mouth.

Cesare watched the man twirl a strand of spaghetti round his fork then greedily swallow it. As the black-haired stranger licked traces of carbonara sauce from his full lower lip, Cesare wondered how it would feel to have that supple tongue tip swiping over his erection. The image was potent enough to send a pang of desire to his groin, causing his dick to stir.

In his mind, the man was on his knees, naked. His hands were bound behind his back and his penis had been fastened into a cage-like device to prevent it from getting hard. Cesare didn’t know why that last detail excited him quite so much but bondage and restraint featured in all his rudest fantasies. Sometimes he was the one in control and other times he pictured himself being bound and tormented. It was all good.

His gorgeous captive would beg to be released so he could pleasure Cesare with his hands and cock, his big, brown eyes full of supplication and bitter frustration. But Cesare would only give a scornful laugh and order his slave to carry on sucking him…

The sound of his father Sergio’s voice from the open kitchen at the back of the trattoria jolted him from his reverie. He looked over at the door to see a familiar figure strolling toward him. His uncle, Vito, in a suit that cost more than Cesare earned in a month of waiting tables and sporting a grin as wide as the Bacchiglione River.

Alongside Vito trotted a short, stout fellow, a visible sheen of perspiration on his balding head despite the relative coolness of the late October day. The jacket he wore appeared a size too small for him.

Without being told, Cesare began to lead the two men to the best table in the house, from where they could see and be seen.

Vito shook his head. “If it’s all the same to you, my boy, we’d rather take that spot in the corner.” He took off his dark glasses and used them to gesture at a table half-concealed by tall potted ferns.

Cesare wondered why his uncle, who loved to be the center of attention, felt the sudden need to be hidden away. But he knew better than to argue. Once both men were seated, he presented each of them with a menu. Before he could hand the wine list to his uncle, Vito said, “Bring us a bottle of Valpolicella, the finest you have.”

“Of course.” He went to fetch the wine, leaving the two men to make their choices. Though he knew already what Vito would select. Grilled sardines to start, then the saltimbocca, served in a rich Marsala sauce.

Uncorking the bottle kept Cesare busy. Yet thoughts of who his uncle’s ungainly dining companion might be vied with those of the hunk with the dark hair and luscious mouth. More and more in recent weeks, it seemed, he’d found himself fantasizing about strange men. Not just customers in the restaurant but guys he passed on the street or the underwear model whose sexy, pouting face looked down at him from the billboard across the way.

Truth was he needed to get laid. His only proper relationship had ended the best part of a year ago when his boyfriend, Marco, had tired of their furtive, clandestine meetings. Marco had wanted everyone to know they were dating, but Cesare couldn’t risk revealing his true sexuality to his parents. His mother, a devout Catholic like all his relatives, still clung to the belief love between men was a sin. He knew that finding out her eldest son was gay would not only break her heart but more than likely get him thrown out of the family home too.

“I’m sick of being your dirty little secret,” Marco had said the night they’d split up. “We can’t keep sneaking around like this. Anyone would think I’m not good enough for you.”

That’s not the case, Cesare had wanted to protest. He’d simply been afraid someone would recognize him when he was out with Marco. The Bianco family were too well known in Padua for Cesare to remain inconspicuous. His father owned this little trattoria in the shadow of the university campus that was a favorite spot of students and professors alike, while his uncle was head of the city’s planning department. And he was well aware how quickly gossip spread. He only had to be spotted sharing one snatched kiss with his boyfriend and the news would arrive home before he did.

Fear shouldn’t keep him from finding someone new but months had passed and Cesare was still resolutely single. As he returned to the corner table carrying the bottle of Valpolicella he noticed the hunk trying to catch his eye. Cesare acknowledged him with a nod of the head and a muttered, “Un momento, signore.”

Trying not to let his attention stray back to the man of his fantasies, he poured a little of the wine for Vito to taste.

Vito took a sip, half-closing his eyes as if savoring the bouquet. “Yes, that will do very nicely.”

“And are you ready to order?” Cesare asked once he’d half-filled the men’s glasses.

“We’ll both have the sardines, followed by the saltimbocca,” Vito said.

Cesare wouldn’t be surprised if his uncle had swayed his companion’s choice of meal. Vito could be very persuasive when he wanted, seemingly able to talk anyone into doing whatever he required. It was one of the qualities which had helped him rise to such a prominent position in public life.

When Cesare had delivered the order to the kitchen, where his father kept a watchful eye over a pan of risotto, he went to attend to the diner he’d been lusting over. Usually, two members of the waiting staff worked the lunchtime shift but Gabriella had called in sick this morning and left him on his own.

“Sorry to keep you waiting, sir.”

The man smiled, his gaze lingering on Cesare a moment longer than might be considered necessary. Cesare felt his desire awaken once more. Was it just his imagination or was this guy flirting with him?

“That’s fine. I’d just like my bill when you’re ready.”

“Of course.” He removed the empty pasta plate with a flourish. Why is a good-looking guy like him eating alone? He didn’t have time to ponder the question. As he was setting the folded bill on the diner’s table he heard a bell ring in the kitchen, indicating that an order was ready to be served.

“Everything okay out there?” his father asked as Cesare picked up two plates of risotto alla vongole from the counter. “You’re not too rushed?”

“No, I’m fine, Papa, honestly.” He glanced at the clock on the wall. “The lunchtime rush is almost over. Did you know Uncle Vito was coming here today?”

Sergio Bianco paused in the act of placing whole sardines on the wood-fired grill and shook his head. “I haven’t spoken to him in days. But then it’s not as if he ever makes a reservation in advance, is it?”

Father and son shared a meaningful look. Being head of the Padua pride of lion shifters gave Vito any number of liberties, which he took on a regular basis. But even if he hadn’t had such a high standing, both in the pride and the wider community of the city, Cesare knew his father would have indulged any and all of Vito’s whims.

When Cesare walked out to serve the diners who’d ordered risotto, he spotted his uncle and the balding man, heads together as they conferred about something. He ignored them, realizing the table where the hot customer had been sitting was deserted. So much for there being a connection between them. The man had walked out without even a goodbye.