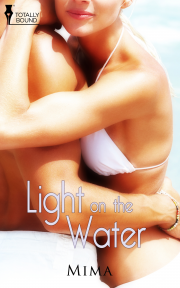 Light on the Water AUDIO

She sees the beauty of mixing silver with gold, and will fight to make him see it, too.

When Sid was twenty-two, a summer storm took her into the sea. And then a merman brought her back. Not content with his decision, she dedicates herself to finding him again, ruthlessly exploring the waters of Bermuda. He's the most beautiful thing she's ever seen, and every inch of her sings "yes" in his presence.

When she finds him again, her battle has just begun. For matches between their peoples do not often end happily…

Mima lives in a sleepy village in NY. She's a librarian by day. Mima is living proof that dreamy children do grow up to success, without their heads ever leaving the clouds.

I've enjoyed Mima's stories in the past and this one served to reinforce that belief once again.

Share what you thought about Light on the Water AUDIO and earn reward points.