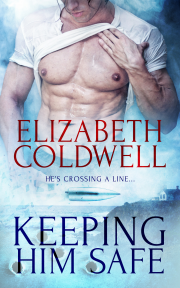 Jon is the man of his dreams, but can he prevent those dreams from becoming a nightmare?

Every night, Xander Craig has the same dream. He’s in the shower with a gorgeous stranger, who is shot by a mystery assassin and dies in Xander’s arms. Xander believes this dream is tied to his guilt over failing to prevent the death of his husband, Gary, but his latest assignment as a top-level bodyguard causes him to reassess that belief. He’s charged with looking after wealthy and successful entrepreneur, Jon Kovacs, who’s being stalked by an obsessive, dangerous ex-boyfriend. As soon as Xander sees Jon’s photo, he knows this is the man in his dream.

Xander escorts Jon to a remote safe house on the cliffs, as a police manhunt for Jon’s ex, Cody, takes place. He and Jon start to fall for each other. Xander knows he’s crossing a line, but he can’t help acting on that attraction. While he and Jon are sharing intimate moments, is Xander’s dream about to become violent reality?

Reader Advisory: This book contains references to stalking, one scene of violence with some gore.

He woke to the aroma of fresh coffee. It had a been a while—long enough for him to almost forget how good it smelled. Almost, but not quite.

Xander hauled himself into a sitting position. Beside him, the sheets were rumpled but still warm. Gary could only have been out of bed long enough to make the coffee, and maybe put some pastries in the oven to heat.

The clock on the nightstand showed that it had gone eight. Xander never slept so late when he was alone. He swung his feet out of the bed. Sunlight slanted in through a crack in the curtain and the polished floorboards were warm beneath his bare feet. Looks like it’s shaping up to be a beautiful day.

Had Gary told him he would be arriving back from Portland last night? He couldn’t remember. Given that he’d been asleep when Gary had arrived, he doubted it. If he’d known, he’d have waited up for the moment his lover had come through the door, so he could have made up for all the time they’d spent apart. And Gary had slipped between the sheets without waking him, even managing to avoid the creaky board on his side of the bed. Xander often joked that Gary would make the perfect ninja assassin.

He drank deeply from the mug that had been left for him, savoring the strong, rich taste of the coffee. The beans were some crazily expensive mountain blend Gary bought from a high-end deli in the East Village. Xander would have called him a fool for spending that much if it hadn’t tasted so damn good.

The sound of running water came from the adjoining bathroom. Xander’s cock, already swollen in his usual morning hard-on, stirred further at the thought of Gary in the shower. Something else he hadn’t been able to enjoy in far too long. Leaving his coffee half drunk, Xander went to join him.

Even through the steamed-up door of the shower stall, the outline of Gary’s wet, naked body was visible. He had his face turned to the wall, giving Xander a mouthwatering view of his muscled back and rounded ass. Xander ached to bury his length in the crack between those full, firm butt cheeks.

“You got room for one more in here?” he asked, pulling open the shower door.

Gary didn’t turn around, but he gave a murmur of assent. The spray had plastered his dark curls to his scalp and Xander pushed the wet hair aside so he could nip at Gary’s neck.

“Fuck, I’ve missed you.” He sighed. “You smell so good, you know. And you taste…” To emphasize his words, he licked along Gary’s shoulder blade. “I was thinking we should go somewhere, just the two of us. I can’t remember the last time we took a vacation together. And God knows I need to take some time away from work. I mean, I love working for the agency, but…”

Gary said nothing. One of the many things Xander loved about him was that he was content to listen, only offering his advice if Xander needed it. It made him a great personal counselor to his students.

“Though next semester you’ll be back in New York, right? No more of that visiting professor nonsense. And maybe I’ll get an assignment that keeps me here for a while.”

Xander trailed his fingertip down Gary’s arm. He brought it to an abrupt halt as he noticed the tattoo adorning his lover’s biceps. A swirling, vaguely Chinese pattern in black and red which Xander had never seen before. When the hell did you get that done? He bit back the comment, though he couldn’t help wondering if Gary had been living a secret life in Portland. A life that involved getting ink done. Maybe it’s not a joke. Maybe he is some kind of ninja…

That was ridiculous. Gary had obviously wanted to surprise him. Hadn’t Xander mentioned a number of times how sexy he found tattooed skin? Still, he couldn’t help thinking something wasn’t quite right.

You need that vacation, he told himself. You spend too much time around paranoid people and you’re getting as crazy as they are.

Reaching around their pressed-together bodies, he took hold of Gary’s cock. Some things, at least, didn’t change. It was already half hard, growing even bigger as Xander ran his hand along it. For a moment, he wondered if he might find a ring piercing its tip—more evidence that Gary had gotten in touch with his wild side while he’d been out of town. The thought was oddly sexy and Xander tugged harder, caressing Gary from root to crown, almost causing him to rise on his toes with every stroke.

“I’m gonna make you come so hard,” he growled in Gary’s ear. “Gonna have you screaming my name as I fuck you. You like the sound of that, huh?”

Water pelted down on both their bodies. Xander’s blood was roused. He couldn’t wait any longer to be inside Gary’s hot, tight ass.

“Do you want to be fucked?” He ground out the question through gritted teeth.

Except it wasn’t Gary. Xander was looking at a man he’d never seen before. His face was angular, with high cheekbones, and where Gary’s eyes were blue, these were a soft, alluring hazel. He had a strong growth of stubble on his chin. Dark hair was sprinkled across his pecs, forming a thin trail that led down to the hard cock Xander still gripped in his fist.

“Who the fuck are you?” Xander yelled, trying to ignore how hot he found the stranger. “And what have you done with Gary?”

He got no further. From somewhere behind them came a soft pop. Too late, Xander registered it as the sound of a gun that had been fitted with a silencer. The stranger crumpled to the floor of the shower, dead. The bullet had punched a neat hole through his forehead and the tiled wall at his back was spattered with a mess of blood and brains. Xander whirled around to face the gunman, waiting for the shot that would end his own life.

Xander woke with a start, eyes shooting open to stare at the ceiling. Cold sweat trickled down his spine and he shivered. He had never experienced a dream so intense, or one that repeated itself over and over in the same vivid detail. He swore he could still feel the water from the shower pattering on his shoulders and back, and smell the stark, coppery scent of blood.

And the question he asked every night, the one he’d never had an answer to, came back to him as he recalled the stranger’s face.

Who the fuck are you?

It's not overly complicated, nor is it explicit, or graphic... I liked this!

Fast and furious sex with a side of great dirty talk!

Share what you thought about Keeping him Safe and earn reward points.