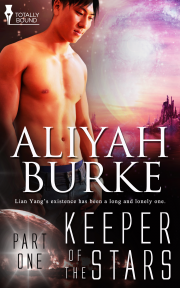 Keeper of the Stars: Part One

Keeper of the Stars serial (Book #1)

Heaven can be found amongst the stars.

Lian Yang’s existence has been a long and lonely one. His purpose known and accepted. One stormy night, he discovers a woman about to jump to the raging waters below. After rescuing her, he takes her home and discovers more than he ever thought he would.

Lana Tennesol has had enough. Enough of everything. A man appeared one night as she prepared to end it all and stopped her. Despite feeling safe, she knows she has to keep moving.

Realising she is important to him and his future, Lian goes after her. Can he convince her to trust him or will the truth about their linked future scared her off?

Reader Advisory: This book is best read in sequence as part of a serial.

The blood from the creatures pooled beneath them, mixing, mingling then eventually began to congeal. After time, the beings moved on, leaving behind more blood and flesh as they battled relentlessly with one another. As night segued into day, a smaller being wandered into the open area and paused by the large red stain. It bent and lifted the tiny thing from the middle, cradling it to his breast, all together unmindful of the blood covering it.

After a few glances around and it too, slunk off again. Moments later, more fighting reigned in the area. Fresh blood covered the dried as creatures larger than life and as old as time fought for supremacy.

Time had truly ceased to mean anything. What was a lifetime for many was naught but a blink for him. Days, weeks, months, years, decades, centuries and millennia. A heartbeat, maybe two. The world had changed and the humans took greater pleasure in killing each other. And as the years went on, they did so with improved weapons.

He’d found his peace here, the place he loved was here. Where he stood—Oregon. He had a massive house and wanted for nothing. He had more money than he needed, women when—if—he wanted them.

With a sigh, he picked up a weed and put it between his teeth. He’d seen friends come and go. Fall in love then die. A vicious cycle. Lian Yang was now in the belief he’d seen it all. What he needed was a change of scenery for a short while. He would head east and see what he found there.

Lian smiled at the woman who took his money, waited for his change then made his way back out to his truck with his purchases. Whilst sliding onto his seat, he glanced up at the night sky. Lightning jagged and clouds swirled.

Storm brewing. He would have known without seeing it—the feeling seeped into his bones. After starting the engine, he reached for and took advantage of the crisp, cool water he’d bought. The quench that plagued him was barely appeased.

“Still better than nothing,” he commented to his reflection.

The thirst had always been there. Unrelenting. Over the centuries he’d learned to deal with the need so it wasn’t so intense, more of an annoying nagging. He tugged on the sleeves of his suit, then put his vehicle in gear and left the parking lot.

Share what you thought about Keeper of the Stars: Part One and earn reward points.