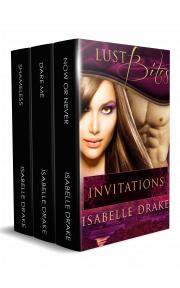 Dressed as a sex slave and hiding behind a mask, Emily arrives at a costume party ready to make a former co-worker pay for not noticing her lush curves.

Emily grabs the opportunity to make a former co-worker she fantasised about before leaving for the US Peace Corps pay for not noticing her lush curves. Her goal—blow his mind with her sex slave seduction and leave him aching for more.

Wearing a borrowed costume and mask, Daniel accepts the offer of a woman eager to show him what she can do with the sheer scarves she's untying from her waist. His goal—make sure the woman undressing for him knows how incredible she is and understands that he isn't a one-night-only kind of man.

A hotel bed, two pairs of handcuffs, coils of rope and a body builder with a naughty plan—can Kitty Maar handle it all?

Her outrageous tales of hooking up with the hottest guys in DC, attending parties at the most exclusive addresses, and joining in on spontaneous ménages at political fundraisers are the talk of Washington. So when she makes plans with Damian Markos, he's expecting a true sexual wildcat.

Damian's secret plan is to surprise Kitty with an evening so intense it will test even her sexual boundaries. It isn't easy coming up with something the city's most notorious man-hunter might not have already done, but he has connections that run deep in DC's inner circles.

Damian is determined to show Kitty that he's the only man she needs to satisfy her every need. Kitty is crazy about Damian, but will she be able to accept the sexual challenge he has planned for her?

Pretending to be a tourist from England while at an exclusive penthouse party, Jenn steps into a trap set by a hot cop with cool-green eyes.

Jenn Davidsen knows the only way to get a guy is to go out and look for one. But what’s a woman to do when she has nowhere to go? Get creative, that’s what.

When an invitation to an exclusive penthouse party comes across the fax machine at the boutique hotel where Jenn works, she takes it for herself even though the invitation is meant for a guest. Once there, she takes the advice of a friend—she pretends to be someone else. Her fake accent and made-up personality make her the centre of attention.

Liam Wallace doesn’t like to make the same mistake twice. So when an actress he once worked with—a woman who’s been at the centre of his sizzling daydreams for months—shows up at a party, he puts a plan in motion. This time he isn’t going to stop until her gets Jenn right where he wants her—in his arms and in his bed.

Emily climbed the gritty Metro steps, then slipped to the side of the packed Georgetown sidewalk and for the third time since leaving her apartment peeked into her magenta satin bag. Of course, everything was still there—two short coils of soft, white rope, a black scarf and her phone. Along with the two lavender-coloured scarves tied around her waist, she had everything she needed.

Her ringtone hit the air just as she was about to tug the drawstring tight. She pulled her cell out, checking the display as she headed south towards the Potomac. "Hey, Jenn."

She held the phone close to her ear, doing her best to block out the rumble of traffic. "Georgetown."

Talking to her best friend meant she could tell the truth. "If I was there, I wouldn’t have answered." Rushing forward to catch the crosswalk light, Emily added, "I’m about six blocks from Gino’s now."

"Then what’s all that noise?"

"It’s Friday night. What do you expect?"

"Why would I take a cab?" she replied, hopping up the kerb.

"My costume?" Emily glanced down at the silky combination of lavender, yellow and pink. Tiny bells jangled from her slippers and her skin flashed in the golden rays of early evening autumn sun. "Sure, I’m wearing it. It’s DC, nothing is too scandalous."

"That top is so low and with that half corset on—"

Emily glanced down. Jenn was right—she knew because she’d designed the outfit to show off what Emily had recently realised was the best she had to offer—her double Ds—and disguise what she still considered her fatal flaw—her too curvy hips. The layers of long, sheer fabric floated around her legs, leaving everything to the imagination.

Looking like a sex slave had been the exact point of the outfit but she hadn’t completely lost her mind. "I have the jacket buttoned for now." It was true, she did, but still she’d noticed more than a few heads turn when she made her way down the sidewalk.

Emily grinned at Jenn’s obvious relief. "Stop worrying about me." She turned off M and headed up a steep side street, garnering more glances as the bells jingled. "I have everything under control. I know what I’m doing."

"So you keep saying. Over and over. Is it me or yourself you’re trying to convince?"

Emily veered around a cluster of soccer kids, then paused next to a mailbox, adjusting one of her delicate shoes. "I’ve got my mind made up. I’m not backing out now."

"I’ll never have a chance like this again. I’ll get what I want and Randy will never know it was me. Nobody ends up hurt. See? It’s perfect."

Nothing but silence came across the line, until Jenn finally conceded. "Okay, I guess. But be careful."

She would to a point, but it was probably being too careful that had been the problem all along. "I thought you creative types were supposed to be wild." Emily waited for a trio of moms with overloaded strollers to glide past then pushed away from the mailbox. "All I have to do is look for the sultan with the green and blue sash and obnoxious gold brocade-trimmed tunic."

"And call me first thing in the morning."

Emily agreed to give her friend most of the details, then clicked off and marched towards Gino’s, tucking the ties of the pink and lavender veil that covered her slim mask behind her ears as she went. There was absolutely no going back now.

Share what you thought about Invitations: Part One Box Set and earn reward points.