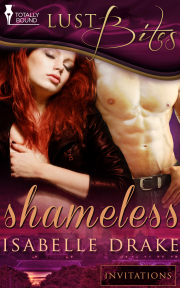 Book 3 in the Invitations series

Pretending to be a tourist from England while at an exclusive penthouse party, Jenn steps into a trap set by a hot cop with cool-green eyes.

Jenn Davidsen knows the only way to get a guy is to go out and look for one. But what’s a woman to do when she has nowhere to go? Get creative, that’s what.

When an invitation to an exclusive penthouse party comes across the fax machine at the boutique hotel where Jenn works, she takes it for herself even though the invitation is meant for a guest. Once there, she takes the advice of a friend—she pretends to be someone else. Her fake accent and made-up personality make her the centre of attention.

Liam Wallace doesn’t like to make the same mistake twice. So when an actress he once worked with—a woman who’s been at the centre of his sizzling daydreams for months—shows up at a party, he puts a plan in motion. This time he isn’t going to stop until her gets Jenn right where he wants her—in his arms and in his bed.

As a cop, Liam Wallace spent his day with other men and women who lived right in the grit of it all. So he knew how to handle himself. But every once in a while, he couldn’t avoid a social situation he knew he ought to—the kind of situation where he was likely to turn into an ass and start saying things he didn’t really mean and was going to regret later. Tonight was one of those nights. He could already feel some restless sarcasm starting to brew inside him. If he didn’t find a way to get out of the party his old roommate Davi had insisted was ‘going to be awesome’, it might turn out to be a rough night. Davi, a wild Brazilian, always loved a good party and assumed everyone else did too.

But no good excuse for getting out of the party had come to him, so there he was at The Indigo, the ultra-trendy bar in the lobby of The Continental. The neon blue lighting and gleaming chrome furniture made the place look like an action movie set. People having a good time—laughing, talking, doing all the normal things he just didn’t feel up to yet.

Behind him, a row of impossibly hot blondes were laughing too loudly, tossing their perfect hair and waving their manicured nails as they looked around the place to see who was paying attention to them. His mouth started to turn down but he stopped himself from frowning.

Be nice. Don’t stand around scowling like an asshole.

He moved his gaze away from the women and looked out into the hotel lobby. Now there was somaeone he could stare at and not scowl. The redhead behind the reception desk hadn’t been there when he’d passed through the lobby a while ago. He would’ve remembered that fair skin. It was probably dotted with freckles in all the right places, and that red hair—impossible to ignore. It hung down her back in a heavy wave of copper. Damn it would look good spread across a white pillow. She looked his way.

Wait a minute. He did remember her. Jenn, the actress. He’d met with her a couple of times last spring when she’d needed to listen to somaeone with a London accent—she’d been preparing her own affected accent for a role in a play. While she’d been listening to him name streets, towns, famous cities, and ramble on about foods and football, he’d been wondering what she looked like under those plain sweaters she always wore. It didn’t help that she’d stared at his mouth the whole time he’d been talking. But she’d had a boyfriend who’d dropped her off and picked her up every time they had met. It’d been hard to even think about getting something going with him lurking about.

A couple came up to the desk and he watched her check them in then pass over a set of key cards. Damn, she was hot. Sweet and sexy. And because they’d spent those hours together, he knew she was hard-working and determined too. A flicker of anticipation stirred inside him. The tiny flame was the first heat of interest he’d felt in a while. Weeks, probably. She looked up, scanning the area as though she was expecting someone. Liam went ahead and scowled. It wasn’t like she was going to notice his frown, since she was probably watching for that same lucky bastard. But that didn’t mean he couldn’t keep staring and imagining her kneeling between his legs, unzipping his pants.

“You going to spend the whole night staring at women, my broken-hearted friend?” a familiar voice asked. “Or are you actually going to talk to some?”

Liam smacked his friend Davi on the shoulder then yanked him into a rough hug.

After they had exchanged hellos, Davi nodded to the row of blondes. “Let’s go check them out.”

Liam took a swallow of his drink. “Might be better if I kept my mouth shut. I’m not in the best mood tonight and I don’t want to ruin your chances.”

Davi pulled his leer away from the women. “We talked about this. I’m taking you to the animal shelter next week. We’ll pick out the neediest, loneliest, saddest-looking pup they have. You can take it home and spoil it so badly it will live as long as Paddie.”

“Her name was Padame and she wasn’t spoilt.”

Davi cocked one of his dark eyebrows. “We lived together, remember?”

“All right," Liam conceded. “She may have been a bit spoilt.”

“We’ll find another sad thing for you to dedicate your life to. Until then, you have to live. Or at least pretend to be alive.”

This was a cute short read, perfect for a quick perk up...Isabelle Drake took a randomly faxed invitation, some pushy friends and a few well-placed fantasies to create a quick and lusty bite.

Share what you thought about Shameless and earn reward points.

This is book three in the Invitations series so what can you tell us about the first two books?

Now or Never and Dare Me both feature women who get the opportunity to step outside the usual boundaries of their life. I love stories about every day women who find themselves in extraordinary circumstances. The twist, they are with very, very hot men. All the Invitations books are sexy, fun reads with happy endings…