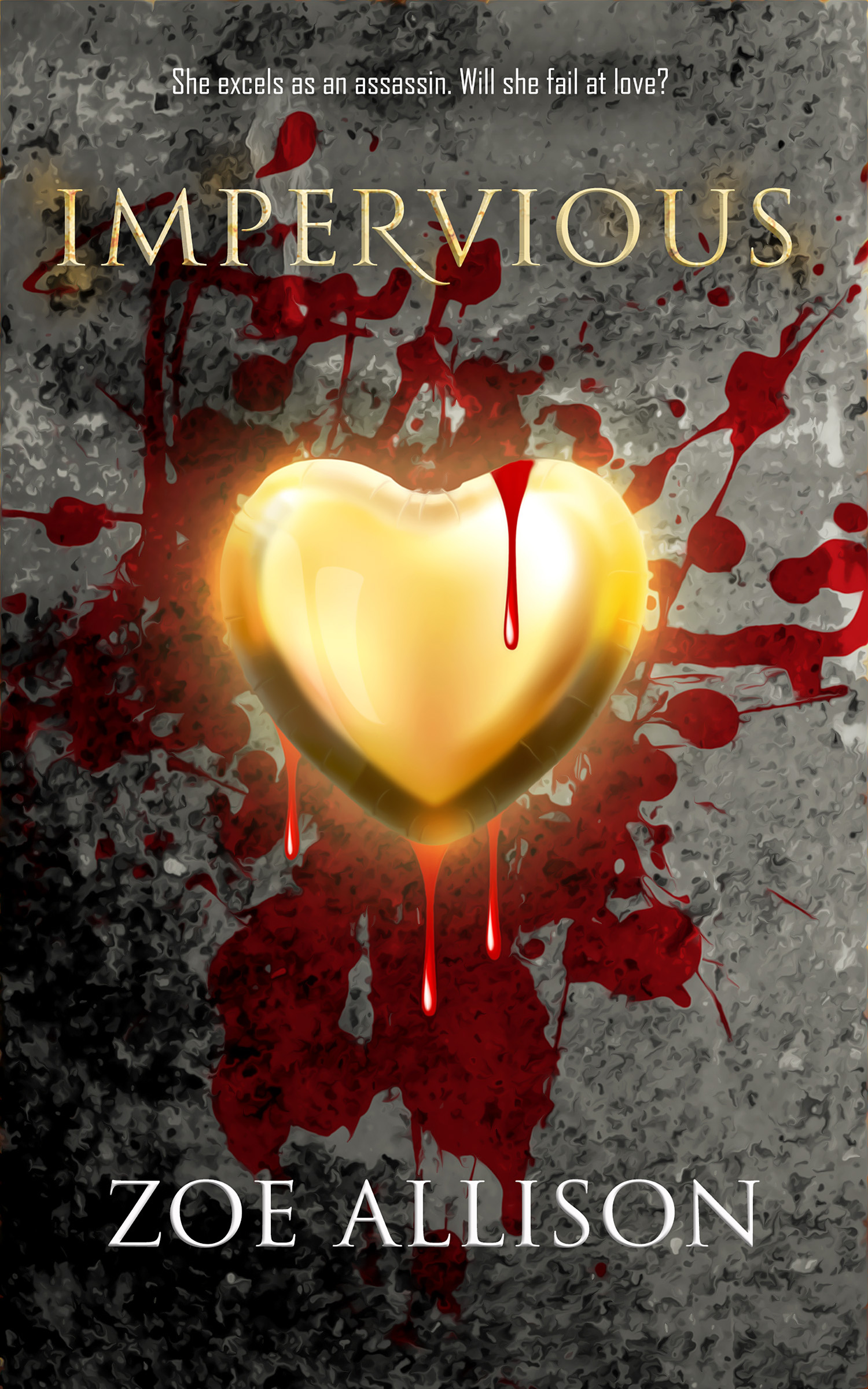 She excels as an assassin. Will she fail at love?

Vampires are real, existing alongside regular humans as a secret subspecies. The malevolent of their kind exploit their powers and immortality at the expense of their human counterparts. The Organization, a league of benevolent vampires headed up by the anonymous Mr. X, works covertly to keep this threat in check. Amber Ridley is the company’s top agent, unique to the team as the only human working alongside her vampire allies. She is an ‘Impervious’, a rare human with powers that can be used against the malevolent.

When Amber’s latest mission takes her back to the UK to work with her close companion Valentino, she meets his old colleague Hayden Knight. Hayden is infamous to Amber as the man who betrayed their organization and abandoned her friend Valentino in the past. She dislikes Hayden instantly, and his arrogant, cold demeanor does nothing to aid this.

Amber and Hayden are forced to work together on The Organization’s most important mission to date, and they must put aside their differences to take down the menace that threatens the very existence of their group. Amber must put her trust in Hayden, but is she impervious to love?

Reader advisory: This book contains scenes of violence, injury and death. There are brief references to sex work, drug use, addiction, parental neglect and physical abuse.

A loud crack pierced the moonlit darkness of the trees. Amber peered out from the large fir she was crouching behind. She couldn’t see Victoria through the cover of darkness, but she could sense exactly where she was. Amber lifted her hand and gestured toward the noise, indicating for Victoria to proceed with the plan.

Amber closed her eyes. She felt Victoria’s presence move away, closer to the target. Louder and louder noises emanated through the wilderness from that same direction. The target was clearly distracted by his human prey and unaware that they were closing in on him. Amber took the opportunity to stealthily rise and creep closer herself. She could sense that he would soon be in her line of vision.

Then there he was, in a small clearing among the firs. He crouched over the limp form of his victim, snarling as he took his fill of blood. Amber darted her gaze over the clearing to where Victoria was hiding in the darkness. Their eyes met, and Amber nodded almost imperceptibly.

Victoria leaped toward the man. As she flew through the air she snarled, revealing her extended razor-sharp canine teeth. He snapped up his head from his distraction, blood smearing his face and dripping from his own pointed eyeteeth. However, his reaction had come too late. Victoria slammed into him, knocking him off the body and rolling him farther into the clearing. She pinned him to the ground and slammed her fist so hard into his face that the impact drove his head into the earth below. He was strong from his feed, however, and his sharp reflexes kicked in. He flung the bottom half of his body upward in a forceful jab, sending Victoria over the top of his head, where she tumbled over the forest floor and landed lightly on her feet. She circled him as he rose to standing and the two of them faced off a few yards apart.

Victoria smiled, tossing her long blonde hair over her shoulder. She lifted her hand, turned her palm upward and brought her fingers toward herself in an invitation to the fight. Her insolent gesture had the desired effect. He growled, and in a blind rage ran in her direction. She had already pulled back her arm and, as he reached her, she smashed her fist into his face, sending him hurtling away toward the tree line, where he crashed into a thick trunk, cracking it in the process. Within a split second Victoria was upon him, pinning him in place. She glanced over at Amber, who was still hidden a few feet away, and nodded.

Amber was by Victoria’s side quickly, even though, unlike her partner, she wasn’t capable of vampire speed. The man’s black, dead-looking eyes met hers, and registered her human form. A sneer appeared on his face as he started to thrash in an attempt to escape Victoria’s grip and get at Amber. Before he could gain any purchase, Amber closed in, grabbing hold of the man’s head. He screamed in agony, and Victoria stepped away while Amber did her work.

A few seconds later, silence fell. Moonlight shone on the fir-lined clearing, devoid of any presence except a mound of ash sitting beside a cracked tree trunk.

Amber leaned against the doorframe of Victoria’s bedroom, watching her partner pack her suitcase.

Victoria gestured toward her. “Pass me that wash bag, will you?”

Amber tossed it over, and Victoria caught it deftly in one hand before depositing it on top of the clothes in the suitcase.

Amber lifted her hands and started scraping her jet-black hair into a ponytail. “Got everything?”

Victoria stood back, surveying the room with her hands on her hips. “Yeah, I reckon so.” She glanced toward Amber. “Going on your run?”

Amber nodded before grabbing the doorframe with one hand to steady herself while she lifted her leg in a quads stretch. “I’m going to try to beat my personal best for twenty-six miles.”

Victoria zipped her bag. “Aiming for two hours then?”

Amber lifted her other leg. “Yep.”

Victoria went to the bedroom window and took in the view over the parks and the river from their elevated vantage point at the edge of downtown. “See ya, Calgary. It’s been a blast.”

She turned back toward Amber. “So, I’ll be gone when you get back.”

Amber nodded. “Where to now? Back to Australia?”

“Nope.” Victoria shook her head. “South America. What about you? Heard anything yet?”

“No,” Amber said. “I think they’ll call later today after I’ve finished my training. I’m going to the gym this afternoon then I’ve got a combat class, so I guess it’ll be evening before I hear.”

Amber smiled at her. “Okay. Well… Have a safe trip.” She came toward Victoria and held out her hand.

Victoria took her hand in a shake. “Great working with you. Hopefully we’ll be paired again sometime.”

Amber let go of Victoria and turned to go. “Yeah, maybe. We’ll see what the boss says.” She gave a little wave as she left the room, heading for the front door where she would ride the elevator down to the apartment-block exit.

The cold air bit into her skin as she left the building, but she barely registered it. A brisk walk took her to the beginning of the periphery of green around downtown, and there she broke out into her run.

She moved her limbs effortlessly throughout her journey. The air temperature started to rise as the sun shone brightly in the sky. Beams of sunlight glinted off the surface of the river and reflected from the high rises, warming her skin.

Amber completed her two-hour run then dropped her pace slightly to jog back home for a shower. She barely registered the lack of Victoria’s presence in the apartment. Their bond had been professional and efficient. Each would have given their life for the other, but yet there wasn’t any real emotional attachment between them. They had been trained to not get involved in that way or else a mission could be compromised. In any case, personal ties didn’t suit Amber.

After the run, her schedule consisted of a meditation period and an organic lunch. She then went to a martial arts session in the afternoon. She had a training room rented at the local gym, where she practiced set moves for two hours, covering a mixture of karate katas, kickboxing, tai chi and also some gymnastics for good measure. Then she attended a combat class so that she could keep on top of her sparring. She pretty much had to hold back the whole time, so as not to draw attention to herself or land anyone in the hospital. Currently she was on downtime, so she didn’t need anything more challenging than that. The schedule’s purpose was purely to keep her active until she got the next call.

Once back at the apartment, just as Amber was finishing her evening yoga routine, her phone rang. She knew it would be her new partner, because everyone would know not to call until her training schedule was finished for the day.

She picked up the phone, feeling some anticipation at who it might be. “Hello?”

A familiar male voice answered, one she had not heard in a long time—and the only voice which could elicit an emotional response of any kind in Amber.

“Good evening, Amber Ridley.” His voice was flawlessly neutral, giving little clue as to his origins. “You are speaking with your new partner.”

Amber registered the unfamiliar sensation of her heart warming. Normally she maintained a very neutral and cool interior, as well as exterior. It wasn’t a romantic sort of warming, however, but the sort that came when speaking to a sibling after a long time apart, because Valentino was like a brother to her.

Amber smiled at the sound of his pet name for her. It meant ‘sister’ in Italian and he had called her that for as long as she could remember. “So, where am I coming to meet you?” she asked.

“You will leave first thing in the morning for the UK.”

“The UK? I haven’t been back there since—”

“Since I found you. I know,” Vale replied. “But it is not London. It is Scotland this time. I do not think you have been there before.”

“The mission itself is in Edinburgh, but we shall reside out of the city, in a more uninhabited area. Mr. X wishes us to stay incognito when we are not directly engaged in tracking or combat.”

“Okay. I’ll meet you at the airport when I land.”

“It has been too long, sorella, I am looking forward to us being together again. I will give you more details once we are in Edinburgh.”

After the call ended, Amber immediately packed her belongings, and it didn’t take long. When one led a frugal life with no intimate or emotional contacts, possessions didn’t really accumulate. 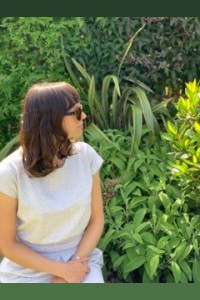 Zoe lives in Edinburgh, Scotland with her husband and two children. A medic by day, she started writing in her spare time as a means to counter burn out and found that this was a balm for the soul.

She is a fan of the romantic genre and it’s ‘happily ever after’ ethos. A sharp contrast to what she can, at times, see in her day job. Zoe is keen for the female lead in romantic fiction to disabuse stereotypes and walk on an equal footing with her male counterparts. She prefers male leads who do not display signs of toxic masculinity and believes and that positive masculinity is much more attractive to women and healthier for men.

Share what you thought about Impervious and earn reward points.