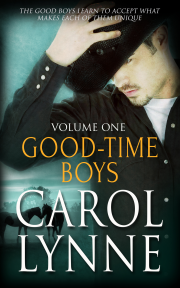 Sonny Good loved his life as an FBI agent, but when his father died and he was needed back home he quit the agency and became a rancher. Now several years later, Summerville, Nebraska is starting to seem a little isolated. An openly gay rancher in the middle of Nebraska just doesn't have many prospective dates.

That is until Garron Greeley moves to town. Garron is the town's newest resident and bad boy bartender with shoulder-length dark brown hair and tribal tattoos. Sonny is struck by lust at first sight. Things between the two of them take off like a rocket until Sonny learns Garron is also the brother of the man who owns the neighbouring ranch. The man Sonny considers his enemy, which leaves Sonny to decide what's more important—the feud with his neighbour or a potentially blazing passion with Garron?

Garron Greeley thought he had it all—a great new job and the man of his dreams to call his own. When his lover Sonny sprang the idea of a commitment ceremony on him, Garron couldn't have been happier. Except for a few men, the town seemed supportive of their relationship, and many showed up to witness their special day.

The ceremony is everything he hoped for, until an act of bigoted violence shatters Garron's world, leaving his new husband in a pool of blood in the middle of the street. He's left wondering if asking for everything will leave him with nothing.

Working with his new brother-in-law, Garron sets out to prove the identity of the shooter and bring him to justice. Along the way he learns that true love can have many different forms.

After unjustly losing his job, ex-Sheriff Rawley Good turns to the one person he has long denied himself, rancher Jeb Greeley. But Rawley soon learns he can't always be the boss when it comes to love. Relationships aren't like running a town and a man like Jeb is not about to be dominated—even in the name of love.

Though he is no longer the Sheriff of Summerville, Rawley won't back down from his investigation into his brother's shooting. Something's not right. There is a murderer to catch, corruption to fight and his job to get back. More importantly, Rawley isn't about to walk away from the greatest love of his life. Sheriff or not, Jeb Greeley is the man for him…

Now he just needs to convince him of that fact.

Publisher's Note: This book was previously released by Totally Bound Publishing under the same title. It has been re-edited for re-release with Pride Publishing.

Share what you thought about Good-Time Boys: Vol 1 PRINT and earn reward points.