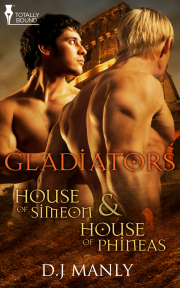 Book one in the Gladiators Series

Gold was the uncontested champion in the arena, elevated to a hero by the masses, but nothing but a slave in actuality. His heart was the only thing he had that was his own.

Gold was the unbeatable champion of the House of Simeon but after the gods foretell his death, his master refuses to put him into the arena again. Instead, he makes Gold his trainer, and uses his body for his own pleasure.

Gold wants nothing more than to fight again. It is all he knows, and he hates the fact that people think he is a coward, hiding behind his master. He longs for a death of glory in the arena, the only respectable way for a gladiator slave to leave this world.

Samson comes into Gold's life unexpectedly. A slave with potential to rise through the ranks, but also the first man who has been able to rouse something inside of him he thought was dead.

Can Samson make Gold reveal his feelings, or will he remain the unattainable trainer who longs for a glorious death?

Book two in the Gladiators Series

In Book 2 of Gladiators, Gold is sold and he and Samson are parted.

Although he lusts after a slave who is denied him, his heart belongs to Samson, whom he believes he will never see again.

Then Simeon, his former master, who laments his loss of Gold, sets up a contest for him to fight his own champion, Samson.

Will Gold be able to kill his own heart in the arena?

"This is very exciting, my dear," the master's wife loudly announced to her husband, ensuring all of the servants heard the conversation. "I hear Gold obtained the best price, and soldiers the lot of them, no common criminals this time." She checked her nails. "The crowd doesn't appreciate those sorts."

Gold wasn't really my name, however the master'or lanista, as he was more commonly called'had the right to call me whatever he chose. I had earned the name Gold when I became the lanista's champion in the arena. With twenty two victories, and no ties or defeats, I was the undisputed champion.

"He seems to have a good sense for slave buying," Gracia went on with her commentary. "It was very astute of you to send Gold to town to do the buying. If anyone knows gladiator stock, Gold does."

Gracia often talked about me as if I wasn't in the room. But then, I was not really a person to her at all. I was a slave, albeit a somewhat exalted one.

I didn't even bat an eye when Master Simeon replied with a sly smile, "Yes, and Gold even bested my rival in the auction. I have won six of the finest on the block, and that's not easy to do nowadays, given what we mostly have to choose from is Sparta's rejects."

I was one of those so called Spartan rejects.

"That horrible Phineas must be cursing the gods themselves today," Gracie giggled recklessly.

We were trailing the master as he walked on through the tablinum, the place where he kept an impressive array of written scripts and original paintings.

He paused, a scowl spread across his middle-aged face. He was extremely superstitious and very careful about not offending the gods. His reprimand was severe. "Woman, watch that vile tongue of yours. The gods are no joking matter. Do you wish to bring the entire house down upon us?"

"I am sorry, my husband." She lowered her head.

I hid a smile, noting some of the other slaves in the vicinity did as well. We'd all felt the effects of her tongue and her whip often enough. It was nice to see her get some in return.

When we reached the other side of the grand house, we waited in the atrium, which was really the most important place in the house. It was the room where distinguished guests were usually entertained, so I didn't get to be in here often.

The master considered this to be an important event, so the new slaves would be brought in through the main door which faced the street.

I glanced up at the high ceiling for a moment and stood with my legs apart. I knew the lanista was relieved to have a new lot of slaves who had some potential for gladiator training. We had lost over twenty gladiators in a short period of time, due to the lanista volunteering many of his best to pay homage to dead family members of prominent citizens. He had ambitions to be elected to the senate, and he was willing to go to great lengths to win favour-sometimes to his own detriment, I felt.

I looked straight ahead now as I heard the shuffle of chained men being herded inside and down the narrow passageway to the grand, sparsely furnished room where we waited. There were six new slaves brought in, all of whom had been warriors in various foreign militaries. They were robust men in their youth and considered a prize, even if I knew most of them wouldn't see the sun set for more than one more day.

They were naked, hands thrust behind their backs, chains on their wrists. The chains extended in one direction to a metal collar around their necks, and in the other direction to both ankles.

The lanista went to inspect the first one in line and lifted his head up high. He did the same to the next and the next, until he came to the last one in the line.

I knew he'd take extra time with this one. He was the one I had bargained the hardest for, perhaps paying far more than I should have. But I knew he was worth the price. It was true he had an attitude which had actually forced me to order the guards to gag him on the way back home. Attitude, however, could be a good thing if channelled correctly. And I would soon strip him of his defiance, as surely as he"d been stripped of his clothing.

As the master inspected him, the slave did not attempt to disguise the sneer on his face. He stood to all his six feet, almost as tall as I was myself, and glared directly at the master. I knew what was to come. The master, a man of no more than five feet six, and far smaller in stature than his new acquisition, doubled up his fist and hit him directly in the mouth.

The slave's head went back as if on a spring, and his mouth ran with blood. His expression however never changed. He didn"t utter a sound. He had the makings of an excellent gladiator, and the lanista knew it because he turned to me and laughed out loud.

A gladiator was taught to face death without crying out for mercy, without acknowledging pain. This one would honour the tradition nicely.

"This one has big balls, Gold. You have done well. If he survives the initiation, he will make a fine addition to the ludi."

Excerpt From: House of Phineas

I opened my eyes and looked around. Gone were the rustic brick walls and the musty dampness. My head rested on a pillow and I was lying prone on a comfortable day bed, a sheet of satin under me.

I had no idea how long I'd been here or how I got to this place. The breeze blew back a haze of white curtains in the distance and suddenly a man walked through them. He wore a toga and had a short cropped beard. "So, how are you, Gold?"

I glanced down at my wounds and noticed they had begun to heal. "I-where am I?"

"You are at the House of Phineas. We"ve been watching you closely. You will soon be fit again." He brought me some liquid in a silver flask. "Drink," he urged.

I lifted my head, drank and sputtered a little. I wiped my mouth on the back of my hand.

"You can sit up. Move around a little. It will be a good thing."

"How long have I been here?"

"More than a fortnight. You had a fever. You slipped in and out of it."

I wiped a hand over the stubble on my face.

"Today you will take a bath and the slaves will shave you. I will have food brought."

I threw my legs over the side of the day bed. I was still wearing the raggedy loin cloth I"d had on in the arena. I wasn't shackled. Dizziness seized me for a moment but I fought it.

The doctor watched me. I stood on my own and walked a few steps, stumbled, placed a hand on the wall and continued.

"You may wander around. Explore a little," the man told me. "You are free to go where you please."

I looked up in surprise.

Suddenly a naked slave girl walked in with a tray of food. There was cheese, meats, and grapes. I reached over and grabbed some of the grapes in my hand and ate hungrily.

I nodded, and began to actually chew the food.

The slave girl smiled shyly at me as she waited patiently for me to devour what was left on the platter.

I walked through the curtains after I'd finished. A soldier stood guard in the hallway. He glanced at me then away as I continued down the corridor. The house was enormous, far larger than Simeon's, the walls hung with elaborate tapestries. I arrived at the front and looked out the door. My eyes grew large. In the distance, there stood an enormous structure, off in the field. Even from this far, I could hear the shouting, the cracking of the whips, the clacking of the swords. I breathed in the fragrant breeze. It called to me, magnolias and apple blossoms.

I turned suddenly to see Phineas standing there.

He laughed slightly. "I love the sound of that, you calling me master." He reached out and touched my biceps. "I've waited a long time for you, Gold."

"You are anxious, aren"t you?"

He smiled. His hand continued its exploration, moving across my chest, and touching the scars. "I'm anxious too, to see you fight, to"- he pressed his lips to my chest, "have you in my bed."

He stepped away as if it was a chore. He licked his lips. "You may make use of the house as you like," he said. "You are my guest."

Guest? "Guests get to leave."

He looked at me sharply. "I'm sure you regret that."

"I will give you a lot of freedom. I will pamper you like none other," he said. "But I will not tolerate disrespect or disobedience. Is that clear?"

Share what you thought about Gladiators: Vol 1 PRINT and earn reward points.