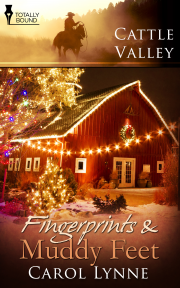 Book 30 in the Cattle Valley series

Making room for two children in a busy household won’t be easy, but leave it to Nate, Ryan and Rio to do it with plenty of laughter and tears along the way.

At the age of eighteen, Nate Gills was forced out of his family for being gay. With hush money in his pocket and anger in his heart, Nate fled Washington DC for Chicago to start a new life. Although he eventually found love with two wonderful men, he buried his feelings of abandonment behind a façade of confidence.

When a horrific accident takes the lives of his younger brother and sister-in-law, Nate is forced to revisit the emotions he’d worked so hard to bury. In a twist of fate, Nate is named guardian of a niece and nephew he’s never met, putting him into direct conflict with the father who shunned him so many years earlier.

Nate Gills tossed another kernel of popcorn in the air for his partner, Ryan Blackfeather, to catch in his mouth. He loved lazy Sunday nights indulging in trash TV with his partners. “I think Kim’s by far the hottest one,” he sighed.

“You’re kidding, right?” Rio scoffed, tousling Nate’s hair. Rio was the only person who could get away with mussing Nate’s perfectly sculpted locks. “Were you not sitting right beside me when Brody went almost an entire episode without a shirt?”

Nate rolled over and licked a path up Rio’s bare chest. “I’m in girl mode. You can’t compare Brody to Kim. That’s cheating.”

“Why the hell would you be in girl mode? Last time I checked, you were a man.” Rio reached for Nate’s cock. “Yep, still there.”

Ryan groaned and reached for the popcorn bowl. “Why do we have to play ‘who’s the hottest’ on every show we watch?”

Nate stretched out and tickled Ryan’s balls with his toes. “Would it help if I said you were the hottest?”

Nate’s phone began to ring, interrupting the clever comeback he was forming. He wiggled out of Rio’s grasp and snagged the cell off the bedside table. “Hello?”

“Just do it,” Joseph replied.

Nate grabbed the remote away from Ryan and turned to one of the twenty-four-hour news channels. The ticker at the bottom of the screen captured his full attention. He caught the name of his brother and felt like he couldn’t breathe.

Nate ignored his partner and turned up the volume, waiting for more information.

“A small aircraft carrying Maryland State Representative Robert Gilloume, an up-and-coming figure in the Republican Party and the son of Senator William Gilloume, crashed in a field in western Pennsylvania at five-fifty-four this evening. Mr Gilloume, his wife, Laura, and the plane’s pilot, John McKenzie, were all confirmed dead at the scene.”

Nate turned off the television when a helicopter flying overhead began to show footage of the fiery crash scene.

“Thanks for calling. I’ll talk to you later.” Nate hung up on his friend before dropping the phone to the mattress. He looked from Rio to Ryan. Although they both knew he had a younger brother, Nate never spoke of him. “I need to go to Baltimore.”

“We’ll go with you,” Ryan offered, pulling Nate into an embrace.

Nate’s natural instinct was to decline the offer. Subjecting Ryan and Rio to his parents wasn’t something he thought he’d ever do, but he couldn’t let his baby brother be buried without him there.

“Thanks,” Nate finally said. He gave each of his men a quick kiss before climbing out of bed.

Although he hadn’t seen his brother since he’d snuck into Robby’s high school graduation, Robby’s wife had sent Christmas cards for the last few years. Nate entered the closet and retrieved the box that contained everything he had of his past life as Senator William Gilloume’s son. He withdrew the previous year’s card. It was one of those photograph cards that everyone seemed to be sending lately. He left the closet and handed the card to Rio. “That’s my brother, Robby, his wife, Laura, and their kids.” He tapped the photograph. “Will was seven in this picture, but he’s eight now, and Hannah’s now twelve.” He sat on the side of the bed as Rio studied the card before handing it to Ryan. “What’s going to happen to them?”

“Depends on whether or not Robby and Laura had a will, but most likely, they’ll go to the nearest relative. Do you know if Laura had family?” Ryan asked.

Nate shook his head. “The first Christmas card she sent contained a brief letter. It said she’d discovered where I was by one of those magazine stories written after the grandstand collapse. She didn’t have my address, but she knew I was mayor, so she sent it to city hall.” Although he didn’t really know Laura, he wished he had. The woman had definitely been resourceful. “In the letter, she said she’d always wished for family and the fact that Robby could disown his own brother pained her. Laura gave me a way to know my niece and nephew, and I’ll never forget that.”

Rio’s dark eyes narrowed. “Why didn’t you share these cards with us before?”

Nate shrugged. “I loved getting those pictures. It made me feel like I was still a member of the family, and as long as I kept that fantasy to myself, no one could make me believe otherwise.”

Rio brushed his lips across Nate’s temple before kissing it. “I’m sorry that you felt we would take that away from you.”

“You don’t have to be sorry. To be honest, it was one of those secrets that I kept for purely selfish reasons,” Nate explained. “My heart wanted to believe my brother missed me, even though my head knew better. Laura was the one who sought me out, not Robby.” The truth finally hit home. If it had been left up to Robby, Nate wouldn’t have the cards. He’d pretended for a while that Robby knew Laura was reaching out to him. That for some reason Robby couldn’t contact Nate himself for fear of what their father would do, but the truth was, Robby was either an asshole or too far under the Senator’s thumb. Brother or not, maybe Robby didn’t love me at all. Nate pushed away the thought and turned back to the card.

“Nothing. Just that I’m going to Baltimore to pay my respects to Laura. Whether or not they let me into Robby’s funeral, they can’t keep me out of Laura’s.”

Oh wow, is this book awesome! I loved all the characters, main and supporting and can’t wait to get hold of this entire series to learn more about each of them. I found Nate, Rio and Ryan extremely intri...

I love the guys in this book. I have to admit that they are the ones that drew me into your world and because of them you have become an auto-buy author for me. I love seeing bits and pieces of their relationship...

Share what you thought about Fingerprints and Muddy Feet and earn reward points.