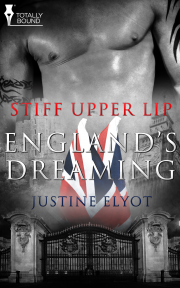 On the day of Queen Elizabeth's Silver Jubilee, worlds collide, and so do bodies. A pearl-wearing girl and a punk boy—can it ever work?

Everybody in Camberwick Square is thrilled to be celebrating the Queen's Silver Jubilee—everyone, that is, except the punk-rock squatters at number forty-one. When auction-house assistant Emily tries to interest art student Ciaran in joining in the jamboree, he ends up much more personally involved than he ever envisaged.

They aren't exactly the best-matched couple in the world, but somehow their breathless passion takes them through street parties and fetishwear shops, towards their final destination of a rather special boat trip on the Thames.

But will passion be enough to keep this pearl-wearing princess and Irish punk boy together against the odds? Or will convention prevail and hold them apart?

"Don’t go near that rabble at number forty-one."

"Why not, Daddy? They’re people too."

"Have you met them? Spoken with them?"

He put down his paper and withdrew the pipe from his mouth.

"If you want to be a social worker, Emily, you can pay me back for that expensive education you’ve just completed. They’re riff-raff and I forbid you to go near them."

She laughed. "You can’t forbid me, Daddy. I’m over twenty-one. I’m all grown up now. Anyway, I must get on. These street parties take an awful lot of arranging and Mummy can’t do it all."

Emily breezed out of the breakfast room as fast as her heels would carry her. She stopped at the hall table to pick up a clipboard and wrap a silk scarf around her neck, then stepped out into a glorious summer’s day in Camberwick Square.

Everything about this tranquil London square was picturesque and pleasing. Freshly painted rails enclosed a miniature garden bursting with blooms, and peopled with elderly residents on benches and frolicking tots with their uniformed nannies. The white-fronted houses that surrounded it were elegant and well-kept, mansions for millionaires-except for one.

Number forty-one, on the far corner, was neglected and unkempt. Black bags of rubbish were piled high all the way up the basement steps, and several windowpanes had been replaced by bodged cardboard or woodchip. The customary calm of the square was sometimes shattered by terrible three-chord guitar riffs and deafening drumming, but today all was quiet, it seemed.

Emily looked down at her clipboard, on which was a long list of party foods and essentials. Some of these items had names and numbers beside them, already promised by the good residents of Camberwick Square, but there were still a few addresses yet to claim their share of the responsibility.

One of these was number forty-one.

She looked across the road at it, dismayed at its tattered appearance. She had only been teasing her father earlier, but all the same... Who were those people? Her imagination and Papa’s frothing fulminations had built up quite a terrifying picture between them. They had been described variously as layabouts, savages, ne’er-do-wells, criminals. The birch, hanging and national service should all be brought back for the likes of them, apparently.

But the likes of what? Emily wondered. In the year she had been living back with her parents since getting her job at the auction house, she had never once seen one of these mysterious inhabitants.

"I’m going to do it," she told herself, striding along the pavement towards the corner of the square. "The worst they can do is...kidnap me? Murder? Rape? Oh, don’t be so ridiculous, Em."

Her shoes tip-tapped up the steps. A milk crate full of broken glass stood by the battered front door. That wasn’t a good sign. Attached to a dented wood panel with a drawing pin was a notice. No Tories, No Hippies, No Toffs. Hawkers and Tradesmen-Fuck Off! Another bad sign-literally.

She pushed the bell, but there was no sign of its working, so she knocked hard on the door instead.

She knocked again. From somewhere behind the splintered wood she heard a bellowing sound, and some thudding. Then silence.

Share what you thought about England's Dreaming and earn reward points.