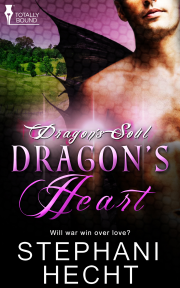 Book 2 in the Dragon's Soul series

Sometimes you have to face your horrible past or else you will never have a bright, happy future.

Lester has always been only half good enough—half a sorcerer, half a dragon, but all a bastard, he was shunned and unwanted as a child. So, the first thing he does when he can is move away to the human world, and he never looks back. But the supernatural world is coming to him. The war between the Dragons and the sorcerers is at its climax and both sides want Lester on their side.

Dragon shifter Mick grew up watching his best friend Lester being abused and shunned. Now that he's back, Mick is more determined than ever to protect him. As the two find themselves falling in love, will they be able to overcome all their obstacles, or will war win over love?

Lester Bucan had been counting on just another mundane day at the ER. He should have known better. First, things were never mundane in the ER and they were never, ever mundane when one was half sorcerer and half dragon.

Things had started out simply enough. He’d gone to work, acting like the normal human he’d been pretending to be for over a decade. Everything was easy-peasy. Things were busy at work, but since he’d been a nurse for over five years, he could handle it. He was keeping up and then some.

Then he had to go into exam room six and that was when everything had gone into the shitter. When the life that he’d worked so hard for a decade to build came crumbling down over his ears.

There, sitting in the exam room in all his five-foot six-inch glory, was Mick. He hadn’t changed much over the years. He still had his black hair styled in a faux hawk and he still wore all black with spikes. He even sported high, heavy boots that probably weighed more than he did. Numerous piercings marred his face, from his eyebrows down to his pouty bottom lip. Damned if he still didn’t look as cute as ever, too.

It made Lester think of a time when he’d had a crush on Mick. When he’d dared to think that something could happen between them. That had been when he was young and stupid, before he’d learned the cruel reality of life—that highborn dragons didn’t mix with bastards like Lester and they sure as hell didn’t mix with half-breeds. So he’d never admitted to Mick his true feelings and he never would. It was just better that way.

Lester quickly closed the door behind him and demanded, "What in the hell are you doing here?"

"I have a nasty cough?" Mick then gave the fakest-sounding hack that Lester had ever heard in his life.

"Nice try, but dragons don’t get sick. So what is the real reason why you’re here?"

"What in God’s name would my half-brother want from me now of all times? He had little use for me before."

Mick frowned, the gesture making him look all the younger. "He was always nice to you. It was his mother who had a problem with you. She really hated your guts."

"It’s probably because I was a living reminder that her husband had cheated on her," Lester drawled.

As much as Lester would have loved to sit there all day and stare at Mick—and he would have really liked to have done that since Mick was a wet dream come true—Lester was busy. He needed to get the young dragon on his way so he could get back to work.

"Oh, right, about that… You need to come with me, and by that I mean, right this minute," Mick announced matter-of-factly.

Lester gaped at him. He knew Mick was a few screws short of a toolbox, but this was a new low even for him. "I can’t just up and leave. I’m in the middle of my shift."

"Well, you see, this is where you have to stop pretending to be a human and come back to our world."

"What in the hell is going on?"

That piece of news did shock Lester. Last he’d heard, his half-brother was MIA, had been for the past five years. Duncan hadn’t even shown up for his mother’s funeral.

Leaning against the wall for support, Lester asked, "When?"

"A couple of months ago, but it gets even better. He has a mate who’s a sorcerer—the son of the very sorcerer who had been holding Duncan captive for all those years by capturing his Dragon’s Eye."

Stephani Hecht deserves a round of applause for maintaining the excitement toward this supernatural world and she makes it enjoyable by giving us engaging war scenes, amazing magic...

Share what you thought about Dragon's Heart and earn reward points.

Other books in the Dragon's Soul seriesView Series Page