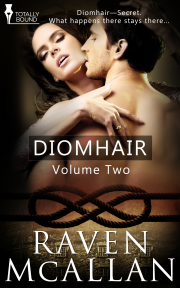 What comes first—your happiness or your job?

Aidan is instantly attracted to the clueless sub he stumbles upon. Even though he knows she is hiding her true identity, he can’t help but push her to discover her limits, and introduce her to the delights of subbing to him.

Scared by the intensity of her reaction, Ailsa runs and all seems lost.

When the truth is revealed, can they work towards a true Dom/sub relationship, even though theirs started on a lie?

At some time in their life, everyone has choices to make.

For Shane, it could be a chance to rediscover her love of kink.

For Ross, it’s the chance to tempt her to be his kitten.

But Shane has to settle some demons before she can move forward.

Until then, well a little playing wouldn’t matter—would it?

However, play can become serious, and decisions have to be made that could change both their lives forever.

This is their chance to be together as Dom and sub or wave goodbye. But at Diomhair, nothing is as straightforward as you hope, and Ross and Shane have a lot to do, before they can say yes—or no.

The thought of the luxury of an evening to himself wasn’t lost on Aidan Jefferies. He stretched back in his office chair and wriggled his tight shoulders. He needed a ten-mile run or a massage. Or a good workout with a sub. No not a sub, his sub, he corrected himself.

As he was damned sure he’d not fit time for the run into his schedule in the near future, and was currently sub-less without anyone on the horizon to change that, he’d have to sort out a massage sometime soon. He needed to de-kink. Well not de-kink exactly. He sniggered to himself. There was about a cat in hell’s chance of that, but definitely de-knot his muscles. However, not that evening. He intended those hours to be lazy, kick back and relax ones. No massage, no companion, no thinking about work, only chilling.

Aidan glanced at the clock. Three hours and counting before he could lock his office door, get on his motorbike and ride the seven miles home. He checked the specification he’d written up, pressed send on his computer and made a note of what he’d done. There was nothing outstanding or urgent that had to be addressed there and then. His mind made up, Aidan turned on his intercom.

“She’s left for hot sex with her man. This is a recording.” His PA’s voice came over the line. “All queries can be sorted tomorrow. If she can walk.” The staccato voice stopped. “Hi, Ade, what’s up?” They didn’t stand on ceremony.

“Not a lot. Just get as much done as you can so we can clock off early. I reckon we need it.”

“Too right. Give me time to beautify myself, eh? Shugie’s home tonight.” Shugie, otherwise known as Hugh, was her husband. He worked away a lot of the time. “Ah shit, hold on, that’s the phone. Let me get rid of whoever it is. How dare they ring when we’re going to dog off?” The intercom went dead.

Aidan shook his head. Dog off? That was an expression he hadn’t heard for years. Why not skiving or playing hooky? She’d never change. Aidan took a swig of water and contemplated the evening ahead. He’d earmarked a steak and a good robust red wine for dinner, along with a gritty drama he’d recorded a few nights previously. He might even stretch to a sticky toffee pudding for dessert. Pure pig-out indulgence. Then it was going to be slouch on the sofa time, and watch hot women and steely-eyed men dice with death, and each other. Right until the credits rolled on a satisfactory ending, be it happy or not.

He wasn’t needed that evening at Diomhair, a private BDSM club based in a rebuilt Scottish castle not far from where he lived. It was the place where he worked for pleasure and not necessity. Diomhair was proving to be very popular, and he was more than glad to lend a hand when necessary, over and above his allocated shifts, both as a dungeon master and a Dom. He blessed the day he’d discovered it and its owners. They had become more than good friends. In fact, they were, he acknowledged, a lifeline at times, and he never minded pulling an extra shift or doing a nice knife or wax demonstration for them.

The phone rang and he sighed. Obviously Jackie hadn’t managed to fob off whoever was on the line. He hoped it wasn’t going to stop them leaving early. Why did the ring sound ominous? Was it because a phone call might delay that perfect moment when he felt like a school kid playing hooky? Why it should hit him like that he had no idea. After all, Aidan was his own boss, and only had himself and Jackie to consider. She deserved time off. Over all the long and lean months she’d given him her support, and on more than one occasion had provided his lunch and told him to hold onto her wages. As she said to him, very firmly, she worked to provide the icing on the cake, not the bread and butter of life.

She was a godsend. Now their accounts were firmly out of the red and Aidan had more work than one man could easily handle. If Jackie wouldn’t take a step upward, and she said she wouldn’t, then he needed to hire someone else to help with the workload. Whoever would have thought his little advertising firm would take off so well?

The phone rang again, breaking into his reverie. He’d worry about the need for more staff later. For now he’d answer the damned thing.

The flight was long and the woman in the next seat a pain in the arse. Shane thanked every god she’d heard of—and made a mental note that if there was any she hadn’t heard of she’d thank them as well—that she was in an aisle seat and had her noise blocking headphones on instead of the ones the airline had given her.

Even though she’d sprung for business class—and in effect she had her own personal space—the woman was a walking, talking annoyance, and much too close. Every time Shane put up the privacy screen—surely an indication that she didn’t want to be sociable—the woman pushed it down again and began to make inane comments. She even burbled on about Shane’s top and how she would go to the same shop to buy one. As it was a plain white tee, Shane decided the woman talked about any old thing because she was lonely or scared.

For a brief second she did feel a pang of sympathy. Terror was a horrible thing to experience alone. Then the woman asked for a double gin and knocked it back in one go, and Shane’s sympathy disappeared as fast as the gin. She remembered she’d noticed her in the lounge, drinking glass after glass of the champagne on offer like a lush in a desert. This had happened both back in Australia and when they’d transferred planes in Hong Kong. Shane heard her tell anyone who would listen she hated to fly.

That wasn’t something that bothered Shane. She loved it.

“Would you like a drink, madam?” The cabin crew member smiled at Shane as she offered a selection of beverages.

“Gin and tonic please,” the woman in the next seat said, interrupting the girl rather rudely, Shane thought. It seemed the crew member thought the same.

“One moment, madam, I’ll get to you when I’ve served this lady.” She turned back to Shane and briefly raised her eyebrows.

“Water, please, I hate being dehydrated, and too much alcohol does that to me.”

The other passenger snorted. “Helps me sleep.”

Oh if only. Shane took her water and sat back in her seat again. The other passenger took her gin and tonic and looked over at Shane.

“You’re only young once, love. Enjoy yourself.”

“I do, thank you.” Shane did her best to be civil, but also show she wasn’t interested in chatting. It didn’t work. In the end, after several more exchanges of banalities, Shane did something she’d never thought herself capable of. Total rudeness. She shoved the opaque screen upward and heard it click. Then she said good night very firmly and ignored the injured hiss from the other side. It was that or find a policeman waiting to arrest her as she disembarked, on the charge of causing a disturbance on an aircraft.

That would make my brothers think they were right to worry. I’d never get out without a chaperone ever again.

The drone of the engines should have been enough of a constant background noise to lull Shane to sleep. Usually she was one of those people her mum said could sleep standing up and she never had problems dropping off, even after that time. Except now. Maybe it was the thought of what she needed to do, but as she stretched out on her flat bed and tucked the airline blanket around her, Shane couldn’t even doze. Her mind jumped from one thought to another like a fly dodging a swatter, and she almost sat up, flicked down the privacy shield and demanded the woman on the other side annoy her once more.

That thought was enough to make her punch the tiny pillow into a heap, wish it was a certain, luckily now deceased man’s face, roll onto her side and fall into an uneasy sleep. Her dreams were elusive and she woke up a couple of hours later with gritty eyes and feeling like she’d not slept for a week. Which, she thought with hindsight, wasn’t far wrong. It was one thing knowing she needed to go to Scotland and find out for herself how someone was faring, another to actually persuade her brothers she knew what she was doing. Especially as she wasn’t really sure she did. Her brothers were more than loving watch dogs. They cared for her. It was only the knowledge of just how much they cared and how they had put their lives on the line on her behalf that kept her from railing against their constant attention.

No wonder she hadn’t told them about her trip until it was all booked and paid for. Even then they’d argued the toss and demanded she take one of them with her. It was only when she told them it was something she had to do for herself, to lay the demons to rest and move on that they’d agreed. Albeit with the proviso she keep in touch with one of them at every stage of her journey.

She is used to sharing her life with the occasional deer, red squirrel, and lost tourist, to say nothing of the scourge of Scotland—the midge. As once she is writing she is oblivious to everything else, her lovely long-suffering husband is learning to love the dust bunnies, work the Aga, and be on stand-by with a glass of wine.

Share what you thought about Diomhair: Vol 2 PRINT and earn reward points.