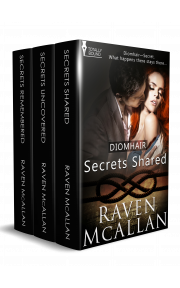 The Diomhair series: Part One

They say never share a secret. Sometimes though, it’s the only thing to do.

David agreed to pick up his friend’s sister as a favour, and is surprised to find himself instantly attracted to the fiery Jess. The experienced Dom recognises Jess’ bluster for what it is—fear. There is no doubt in his mind that Jess is submissive, but getting her to accept that fact will take some doing.

David is determined to help her, but it is up to Jess to accept. When Jess does give in to her secret desires, can she truly let go and be the sub David is looking for, or will she hold onto her secrets?

At Diomhair you never know what will happen in the end.

Pregnancy should be the happiest time of your life. What’s a sub to do, however, when her Dom won’t touch her? Kath can’t understand why Jeff is being so difficult. After all, she’s pregnant, not ill, and she’ll combust with sexual frustration if she can’t seduce Jeff into play.

Jeff can’t help but worry over Kath’s health. It doesn’t matter what anyone, including the doctor, says about sex being okay, his mind tells him otherwise. It’s his duty to protect his sub, even if he’s giving himself blue balls in the process. He’ll do anything to keep her and their baby safe.

With the two of them at an impasse, tension runs high, especially when the future of Diomhair is threatened by an unknown enemy.

As they pull together to secure their home, and their workplace, can they also resolve their personal problems, or does pregnancy spell the end of their Dom/sub relationship?

What comes first—your happiness or your job?

Aidan is instantly attracted to the clueless sub he stumbles upon. Even though he knows she is hiding her true identity, he can’t help but push her to discover her limits, and introduce her to the delights of subbing to him.

Scared by the intensity of her reaction, Ailsa runs and all seems lost.

When the truth is revealed, can they work towards a true Dom/sub relationship, even though theirs started on a lie?

“What do you mean this won’t do?” Jess looked down at her light grey silk racer back top and dark grey skinnies. They worked well with her pale skin and ginger hair. A typical Celt, she had to be careful of her colour coordination. In her mind, her clothes were perfect for a night’s clubbing. “We’re going clubbing. Last time we went to a club I wore these and you said they were perfect.”

Kath rolled her eyes. “There’s clubs, hon, and there’s clubs. A French Connection concoction, gorgeous as it is, won’t exactly hack it where we’re going. Not to mention you always wear those wherever we go. No, tonight you need to wear something like this.” She smoothed her hands over an almost-there mini skirt and a tiny bustier. Jess reckoned it would either cut off Kath’s circulation or pop her boobs out of the material like a jack in the box.

“And here’s yours. A dress instead, though, as you seem to have an aversion to my tops.” With a smirk Kath handed over a tiny scrap of bright pink material.

It was a beautiful clash with Jess’s hair and Jess winced.

“Go on get changed. We haven’t much time.” Kath held the material out to Jess, who ignored it. Kath stuffed the dress into Jess’s hands, smirking as Jess took it and held onto it automatically. Jess looked on as Kath took a deep breath and her boobs almost spilled over the top of the leather bustier then shook her head in mock despair. Surely it was mere willpower that held it up?

“Kath, that top is almost indecent. What does my lovely twin say about you going out showing nearly your all?”

Kath giggled. “Jessie, love, he chose it. And he’ll meet us at Diomhair later.”

“Jeever?” Jess repeated, doing her best to copy Kath’s accent. “What’s that?” It wasn’t a name she’d heard before, and she’d bet her new handbag it wasn’t spelled how it was pronounced.

Kath sighed and Jess got a strange feeling deep in her stomach. Scary, like the time Kath had persuaded her to bungee jump from the Finnieston Crane, or when they’d sky dived. In her opinion, Kath was sneaky. Jess replayed Kath’s words in her mind.

“Hold on, you say Jeff’s meeting us?”

“Well I might as well not come then. He’s worse than our mum. If a guy even smiles at me he wants his life history. Heaven help me if one asks me to dance. Especially not dressed in a scrap of almost nothing.”

Kath giggled. “Er, Jessie love, I maybe need to tell you exactly where we’re going. Before the car gets here.”

“Go on.” She did her best to keep the wariness out of her voice and was sure she hadn’t. “And stop shoving that pelmet at me, no way am I going anywhere in that.”

“I know what it’s for.” Why hadn’t she made the connection earlier? “Secret. Oh shit, don’t tell me it’s some weird pop up place, and we’re blindfolded to get in? Oh no, Kath, no, no, no, you’re not dragging me into anything weird. Not again. That shop in town was bad enough.” Jess blushed as she remembered the bondage shop Kath had dragged her into. She’d chosen to ignore the way her nipples had puckered when she’d seen clamps and chains designed for that part of the body, and her juices had gushed looking at a clit clamp and various jewellery to decorate it. Once she’d worked out what it was meant for, that was. She might have the idea she was fairly street wise, but Jess knew now, that whatever she’d done she was a babe in arms compared to a lot of people—Kath probably being one.

Kath howled with laughter, then sobered. “Where do you think I got this from?” She ran her hands over the bustier. “Look, hon, you said you wanted to get out of your rut. Jeff and I decided this was the best way. Hell, I reckon if you’ll let yourself, you’ll not only enjoy the night, you’ll be more than interested to indulge.”

“Whatever you fancy. Oh, Jess, don’t look like you’re going to watch an execution, you don’t have to do anything. Hell, you can stop in the bar and drink orange juice if that’s your preference, but you did say it was up to me to shake you up a bit.”

“Hmm there’s shaking, and there’s shaking.” Jess knew she sounded less than enthusiastic. “So, what exactly are we going to?” The way Kath looked at her made her heart pound and her stomach churn. She wasn’t going to like the answer she was sure. “Fess up.”

She was correct, she didn’t.

Jess just knew her mouth had dropped open and the heat that flooded her would show on her face. Damn it, no. Not that. Are they crazy? They don’t know, they do not know.

Share what you thought about Diomhair: Part One Box Set and earn reward points.