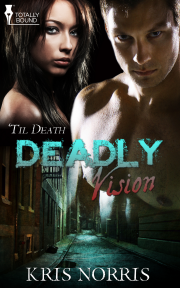 Book 1 in the 'Til Death series

Book one in the 'Til Death Series

A power she can’t control…

Fallon Kindade is cursed. There’s no other explanation. Just when she thought she’d buried her past to the point it couldn’t be resurrected an eerie voice beckons to her, pulling her back into the nightmare she’s survived twice before. And despite the excuses she makes, Fallon can’t deny the truth. The visions have returned. And they’re more intimate than ever before.

A love he can’t forget…

He’s a fool. Not only is Special Agent Gil Grant unable to catch a break on his newest case, he’s stuck fantasizing about a woman he pushed away. All because of one fatal mistake. A moment he can’t undo. But after leaving Fallon with nothing more than a few words scribbled across a piece of paper, he’s got little chance of ever winning her back.

A slow descent into darkness…

When a twist in fate reunites them, Fallon is powerless against the undeniable heat that still simmers between them. She knows becoming lovers, again, is more than dangerous, especially when her visions are their only hope at finding a killer before he strikes again. But can she trust Gil with the truth, knowing it might be what finally destroys their chance at happiness? Or will the city’s newest serial killer claim her as his final victim?

“I need the fucking cops!”

Fallon bit back a curse, curbing her urge to hang up, as she spoke calmly into the phone. “Where do you need the police?”

She heard the man tell someone to shut the hell up as he breathed heavily into the phone. “There’s a fucking fight going on here, so stop asking me questions and send the damn cops!”

“It’s hard to send the police when I don’t know where you are, sir.” Fallon kept her voice cool and detached, knowing any increase in her tone would set the guy off even more.

“Only land lines. You’re on a cell, so the only address I get is the repeater you’re bouncing off of. So why don’t you tell me where you are, and I’ll send some help your way.”

“God damn, son of a bitch…I said shut up already…just send the cops to Joe’s Bar. They’ll know where it is.”

“What kind of…” The phone went dead. “Bloody typical.” She released the line and dialled the number back, not surprised when the asshole’s messaging system picked up. “Great. Just great.” She typed a few lines onto the screen, shaking her head in disgust. Why the hell jerks like him called the police if they weren’t willing to talk to the dispatchers never ceased to amaze her. Seven years on the job and she still hadn’t figured it out. She let the sigh she’d been holding back tremble across her lips as she keyed up the radio.

“Bravo one and bravo two, dispatch.”

The line hung silent for a few moments before a husky voice surged over the airwaves. “Bravo one. Go ahead, dispatch.”

“Are you guys available for the usual down at Joe’s bar?”

“Yeah, we’re clear too, dispatch. Got any details for us?”

“Just the usual dead silence on the other end of the phone,” she sighed. “But I could hear the music still playing in the background, so I doubt it’s that out of control yet. Other than that, I’ve got nothing for you.” She paused, listening to the men mutter under their breath. “Would it help to say my spider sense is tingling?” she added.

Laughter erupted over the radio. “Thanks, Fallon. We’ll be sure to watch our backs.”

“Don’t forget to give me a shout when you’re on scene, and I’ll set the timer for you. Let me know if you big strong fellows need any more back-up.”

“And distort the God-like images you’ve developed for us. I don’t think so, darling.”

Fallon smiled as she cleared the channel and rubbed the bridge of her nose. She knew it wouldn’t stop the headache from spreading, but it was all she could do until she slept the bugger away. Damn, she was tired. The dispatch centre had lost more than a few operators over the past few months, and she’d worked more overtime than she cared to count, tonight being no exception.

“Hey. Fallon. What are you still doing here?”

Fallon turned towards the voice, smiling at Jane’s watchful expression. “You know me, Jane. I can’t seem to get enough of this place.”

Jane rolled her eyes as she set her purse down on the desk beside Fallon. “Fourteen hours again?”

“Try eighteen,” she replied, answering another call over the radio. She heard Jane mumble beside her, but chose to ignore it. Jane had a husband and a life to go home to. All she had was her mountain bike to keep her company. “Roger, bravo two. Do you want me to leave the channel open or set a five minute timer for you?”

“Timer’s fine, Fallon. Just a few redneck boys duking it out in the parking lot. No weapons. I don’t anticipate any problems.”

“Speak for yourself, Jeff. I just had my nails done,” moaned Ken.

Fallon couldn’t stop her smile. “I’ll chat with you in five, boys.”

“Another fist match at Joe’s?” asked Jane, clipping her headset in place. “That’s the third time this week, and it’s only Tuesday.”

“Must be the lack of sunshine.”

“More like the lack of willing females,” she retorted. “I swear men get so worked up when they aren’t getting laid.”

“This coming from a woman who gets more than her fair share of sex,” pointed out Fallon. She watched Jane’s face flush a deep red. No doubt she’d made the most of her days off. “You about ready?”

Jane nodded, tapping her computer to life. “Why don’t you go home and call it a day… and a night, for that matter.” She sighed as three lines lit up at once. “And don’t come back for a while, got it?”

“Believe me, nothing will be able to drag me back in here before I’ve had a couple of days off.” She gathered her things, wondering how she’d spend the next forty-eight hours. “Call me later. Maybe we can catch a movie tomorrow?”

Fallon forced a smile as she headed out to her Jeep. Jane meant well, but she seldom called once she left the office. Too much sex, thought Fallon, settling into the driver’s seat. God, what she wouldn’t give to be in Jane’s place. She loved sex. She just wasn’t getting any.

You could have some if you weren’t still pining over Gil.

She cursed the irritating voice in her head. She wasn’t pining over Gil. She was just having trouble moving on. It didn’t mean she was, in any way, pining for him.

Share what you thought about Deadly Vision PRINT and earn reward points.