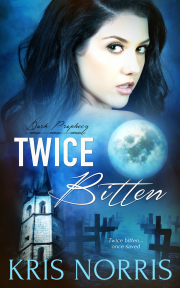 Book 2 in the Dark Prophecy series

Despising the sight of blood isn't a desirable quality for a vampire, never mind an Enforcer, a vampire sworn to protect a sacred talisman from those seeking its power. Couple that with a twin brother who can feel and taste your every sensation and immortality feels more like a curse. Too bad Gabe and Mathias' troubles have just begun.

When the guardian of their talisman literally falls into their lap, they discover the draw of the pendant goes much deeper than just their pledge. It rekindles their sexual desires, and they'll use all their vampire tricks to lure Ripley into their bed, and into their withered hearts.

But when Ripley discovers the truth, her life and the fate of the talisman are put to the test. Can the men earn back her trust or will this sunset be their last?

Reader Advisory:This book is part of a series, with characters reappearing in each book, though it can be read as a stand-alone story.

“Fuck, Rafe,” slurred Alexander. “Fuck him and his holier than thou attitude.”

Gabe glanced at the bar, his fist clenched around the glass, as he watched the bastard down another drink, tipping the bottle back, exposing his throat. What Gabe wouldn’t give to curl his fingers around the creep’s neck and tear off his arrogant head.

“Easy, brother,” warned Mathias, nodding towards Alexander. “He’s not worth a scene. Not this close to sunrise.”

Gabe uttered a hushed growl, turning back to his drink. He tried to lose himself in the cool feel of the smooth glass against his fingers as he thumbed the lip, wishing the liquor would wash away the twisting feeling in his gut, once and for bloody all. But it didn’t help. Nothing did.

“I had him,” ranted Alexander, the alcohol threading all of his words into one long, garbled syllable. “He wasn’t even fighting back, using the last of his strength to beg his whore of a human to toss him the pendant. Everything was going perfectly until she destroyed the damn thing...bitch! If it hadn’t been for her, I’d be king of this fucking realm by now!” He wiped at the series of small scars etched across his cheek. “My only consolation is that they both probably died along with the talisman. A fitting end for a poor excuse of a vampire. I suppose what they say is true. Once a preacher’s son...always a preacher’s son.”

Gabe felt Mathias tense, and grabbed his brother’s arm before the man stood up and started a war they couldn’t win. Alexander never travelled alone, preferring to send his minions out to test the waters. There might be only a handful of them in the bar, but Gabe knew there were dozens waiting in the shadows. And getting killed before their talisman was found, wasn’t part of the plan.

“Relax, Mathias. He’s just showboating. Give the bastard five more minutes, and he’ll stagger back to his rock for the day. You were right. No sense starting something we can’t finish.”

“But he’s determined to claim one of the remaining talismans. If we eliminate him now, it’ll be one less to face later...if there even is a later.”

Gabe sighed. There was no mistaking the desolate tone to Mathias’ voice. After searching for centuries, neither maintained much hope that they’d find the mysterious pendant they’d been created to protect. Even knowing Rafe had finally discovered his, wasn’t enough to stay the sombre mood. No one had heard from Rafe, or the human girl since, and that didn’t give either of the men much comfort.

“Another vampire will simply take his place, and if it’s all the same, I’d rather face an opponent I know...and Alexander’s greatest downfall is his predictability.”

Mathias huffed, pressing back on the chair as if the damn thing could bring him some form of peace. But Gabe knew there wasn’t any to be found. He turned to watch his drink swirl around in the glass, reflecting pools of light onto the table, when Alexander stumbled across the floor, stopping close to the table.

“Well, well. I’ll be damned. If it isn’t the illustrious, Sir Gabriel, and his simpleton of a brother, Mathias. After all that’s happened over the last year, I never expected to see you two around here...not without your own army.”

Gabe’s lips twitched into a smile as he faced the bastard, shrugging his indifference. “Didn’t know we needed one.”

Alexander laughed, washing his foul breath across Gabe’s face. “Only if you hope to stay alive.”

Mathias scowled, glancing at Alexander over Gabe’s shoulder. “Bugger off. Your breath smells like cheap beer and we’re really not in the mood.”

“From what the ladies say, you two are never in the mood. But that doesn’t surprise me. Denying what you are only makes immortality a waste...just like your buddy Rafe found out when he chose to stand between me and what I want.”

Mathias raised an eyebrow. “From the sounds of it, Rafe won.”

Kris Norris follows up with a fantastic second installment to her Dark Prophecy Series...The sensual scenes were well choreographed and with every touch or caress the reader learns a little more about...

Share what you thought about Twice Bitten and earn reward points.

Other books in the Dark Prophecy seriesView Series Page