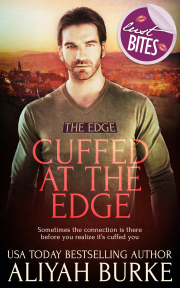 Cuffed at The Edge

Book 4 in the The Edge series

Sometimes the connection is there before you realize it’s cuffed you.

Patrick Meyers had come home to The Edge and had taken over the role as sheriff. One rainy night he pulls over a woman and puts her in jail. Turns out, not only is she a great friend of his sister, but she’s also the woman who’d rocked his world one night at the Chicago Pier.

Ainsley Milne was cursing the day she ever agreed to come visit her friend in northern Wisconsin. She was sick, exhausted and now in jail like a common criminal. Who to blame? The hot-as-sin sheriff who makes her think about kissing him in her cell.

Once they figure out their past connection, everything is different. The sparks that had been there sizzle even hotter. Will they find a way to make it work?

Publisher's Note: This book is part of a series and is best read in order.

Patrick Meyers clucked his tongue as he watched the gray Toyota Tercel swerve a bit more before correcting its course again. Could it be the rain? Sure. But he took his job of protecting the residents of The Edge seriously.

It wasn’t someone from town. He knew all their vehicles. The slow pace had taken some getting used to when he’d come home a year ago because of his father’s stroke. He’d taken a leave of absence from his role in the Chicago Police Department to be home, helping out. That had turned into taking over as sheriff.

All the Meyers siblings had returned. And stayed. Joe and Jennifer, the twins, had taken over the daily operations of running the farm and had gotten it out of the red in a short time. Most credit was because of his sister’s killer acumen. She’d have given Midas a run for his money.

He flipped on the siren and lights before rolling out of his parking spot after the gray vehicle. He pulled up behind it and waited for the driver to slide over onto the shoulder. Looking up at the droplets slamming his windshield, he sighed and climbed out, rain immediately streaming off the brim of his hat. A cold rain too.

The driver lowered the window and he almost took two steps back from the electricity that slammed him. Raisin-brown eyes.

“Ma’am,” he said, knowing she wasn’t from any of the surrounding towns either. They just didn’t have black people living around this area. They would drive up from the cities and larger towns to get fruit but not stay here on a permanent basis. At least not that he knew of.

“What’s wrong?” Her rasped question was like striking a match and putting it to dry kindling.

Her nose was puffy, and her eyes were a bit bloodshot.

Drunk. Or high and buzzed. Either way, not someone who should be behind the wheel. Especially when driving conditions were less than optimal.

“I’m going to need you to shut off your car and step out, please.”

Suspicion flared in her eyes. “Why?”

Killing the engine with a frustrated flick, she then unbuckled her belt and slowly stepped out into the rain. Water shoved her clothes against her, highlighting the curves of her upper body, the long-sleeved shirt hiding nothing. Including the pointed nipples and the outline of a belly button ring.

He shoved the intrusive and unneeded thoughts of being beneath a shower spray with this stranger to the back of his mind and focused on issuing a breathalyzer test.

When he saw the result, he ushered her to the back seat of his Bronco.

“You’re showing above the legal limit. I can’t let you drive.”

She shivered and shook her head. “Are you fucking kidding me? I’m not drunk.”

“Trust me, ma’am. Being belligerent isn’t going to go in your favor.” Her teeth began chattering. He tossed her a blanket and waited until she’d drawn it around her shoulders. “Don’t give me any hassle. I’ll get your things.”

He stepped back into the rain, he grabbed her purse and the suitcase from the passenger seat.

Once in, he radioed Chuck for a tow, said where it was and turned up the heat before pulling back onto the deserted road. He stared at his passenger. Prisoner.

Her eyes spat not just flames but also shards of ice.

“Where are you going?”

She tightened her grip on the blanket.

“I see your suitcase. Where’s your end destination?”

“Now? Jail,” she seethed before succumbing to a coughing fit.

He left it alone. Pulling into the station, he parked in front of the small building. The jail wasn’t that big. Three cells up top and four down below that were seldom used. Hustling her in, he handed her the suitcase and said, “Change into something dry.”

Her plucked eyebrow rose slightly. “Want me to strip right here by the desk or is there anywhere a bit more private?”

He’d meant to tell her where the bathroom was. He’d forgotten. Embarrassed and frustrated, he pointed.

She sneezed then walked off. As she changed, he opened the last cell to give her a bit more privacy. Not that he expected a lot of traffic through here on a Thursday night.

The desk phone rang and he bent to snag it.

“Pat, it’s Mary. You coming out tonight for dinner?”

“Why not?” His baby sister had an edge to her tone. They were pushing family time in a big way.

“I have a prisoner. Can’t leave her alone.”

“Goodbye, Mary.” He hung up as the newest—and most beautiful by far—guest he’d had while he’d worn the badge for this town walked into view.

She had her wet clothes balled up in one hand and the suitcase in the other.

“Follow me,” he ordered, not understanding why he was so drawn to her. Why all he could think about was removing her clothes and seeing how soft her dark skin was beneath his tongue.

She marched by to the open cell, head held high, rigidity in each step. Hell, she even smelled sexy.

“I shouldn’t be here. I wasn’t drinking!” Forceful but not shrieky.

“Do you want to see what you blew?”

She whipped back to glare at him with narrowed eyes. “I don’t give a damn what it showed. I could blow it five more times and I will still swear I wasn’t drinking.”

His retort was swallowed up by her full lips forming the word ‘blow’ and the image it gave him. He could see them around his cock as he slipped back and forth.

“I need to process you.”

He prayed that sounded like process and not possess, as it did in his mind.

“Never should have come here,” she groused, sitting on the bed before wrapping up in one of the blankets prior to facing away from him so he could only see her back. “Never.”

He closed and locked the cell, trying hard to ignore her jerk at the loud sound. Her purse sat on his desk and he reached in to pull out her wallet. He brushed his fingers over several unopened condoms as well as a box of them.

“Right, not drunk.” It bothered him seeing those prophylactics. Pulling out the sleek black wallet, he found her license. Ainsley Milne.

He put it back hand locked up her purse in a filing cabinet then did her report. Once he finished, he called Chuck to ask about the tow. It had been taken care of.

Nothing left for him to do but sleep. It was a Thursday night so he wasn’t expecting any major trouble. After sneaking another peek at his guest, he reclaimed his chair and leaned back to stretch out. When was the last time he’d had a good night’s rest? Longer than he cared to remember.

Right, because he needed that reminder, said no man ever. And a good bout of sex was even farther away than his nightmare-ridden, so-called rests.

He glanced to the far cell and frowned over the instant twitch of his cock. There was something about her.

“Not doing this. I’m not about to hit on a woman I just put behind bars.”

His brain and libido were not in agreement there.

It was going to be long night.

Share what you thought about Cuffed at The Edge and earn reward points.

Other books in the The Edge seriesView Series Page