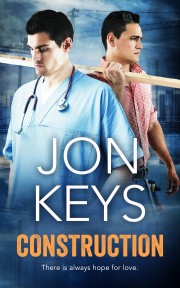 Sam’s self-worth is at a low, between losing a leg in Iraq and the reaction of his recent dates to his disability, but there may be new hope for love.

Samuel Oates returned from the war in Iraq missing part of one leg and much of his self-worth. He’s transitioned from his job as medic to becoming a med tech at the regional hospital. While enjoying his usual noontime hobby of watching hot construction workers at the nearby project, he meets someone else who also enjoys the view. Jorge is a middle-aged mystery but seems to be interested in Sam without the complications he keeps experiencing with other men.

Later that night, Sam discovers his dream construction worker trolling at the local leather bar. Their hook-up leaves Sam with his typical feeling that he couldn’t ever do any better than a quickie. But the next day, Jorge returns and Sam’s attraction to him grows.

Juggling two men and a job he likes, Sam must discover a way to find someone who will meet his needs without feeding his insecurities.

I picked up my pace as I made my way to the building site for my favorite lunchtime viewing at the construction job. There was such a variety of men, that at least one or two kept me watching during the hour or so I escaped the hospital for my lunch break. I’d found a seating plaza in the perfect spot to catch some late summer sun and the sweetest breeze to make this harmless fantasy even more enjoyable.

A hobby during these outings consisted of picking out a fantasy man of the season. It only took a few seconds before I spotted my first choice—the one who’d lured me back all week. Built like a lumberjack with broad shoulders and a muscular body, he could keep me happy for hours. Over the past several weeks he’d given me plenty to dream about. Lucky for me, the combination of scrubs and compression shorts kept my excitement from being too evident.

I pulled out the sandwich I’d made before leaving for work that morning. Since I worked as a med tech at a regional hospital—which translated into limited funds—packing a lunch from home helped take the strain off my budget. It also gave me more time to enjoy the beautiful scenery.

I like my job. I don’t have to deal with the stress the nurses endure because I’m just the blood sucker. As long as I didn’t cause the patients any more pain than necessary, I was almost beneath their notice.

Today, my interest was in the baser dreams of what I might do if a fantasy became reality, but after the IED in Iraq had eliminated a lot of my left leg, my choices in guys were more limited, with too many having amputee fetishes. A date who got excited thinking about my residual leg didn’t make my list of prospective second dates, which created my current situation where I spent my lunch dreaming of that perfect guy—or ‘adequate’ would work, too.

The gentle sunshine wrapped me in a comfortable warmth that left my thoughts drifting as I enjoyed my meal. The next time I glanced up, fantasy dude number one had disappeared. Well, fuck. But finding my number two choice in this crew wasn’t difficult. His red bandana flapped from under the yellow construction hat. The opposite of number one, this guy filled a whole other realm of desires—dark skin, shorter and muscular as hell. With him, I’d keep the neighbors awake. I reached down and adjusted myself before taking another bite of my sandwich.

I glanced around, irritated that I’d been caught. My sex life consisted of me, my hand and an impressive collection of toys. Now someone saw through my façade and I wasn’t pleased. I almost berated him. Instead, I decided talking with someone other than my few friends at the hospital might not be horrible.

“Yeah, they’re nice to drool over, but chasing after straight boys only makes life miserable. I found that out in the Army. You find a hookup. They freak out. It goes bad.”

My intruder nodded and returned his gaze to the construction site full of wet dreams. I used the distraction to check him out. He had darker curls over his head with a white patch in the front—probably one of the latest styles—a short beard and a few wisps of hair escaping the top of a dress shirt the color of Lake Michigan on a sunny summer day. He rated higher in the gay food chain than me when I’d had all my body parts. Now? In gay slang, I categorized myself as a scarred and mangled otter. I had no chance with the drool-worthy group we’d been watching, even if they turned out to like men. The hot, muscular types aren’t interested in damaged goods. They want guys who are as steamy as they are.

He’s caught me checking out the construction guys. Now I’ve got myself in a situation where I have to talk to him.

He motioned toward the site. “Which one’s your fantasy fuck?”

My mouth opened and closed like a beached fish until I decided to enjoy myself. “The big guy—broad shoulders and bubble butt. I could make him moan for a couple of hours.”

My fellow sex pervert grinned and nodded. “I bet he’s got a big old mushroom dickhead you can lick on until he fills you with man sauce.”

My fellow ogler snickered. “You might have a point. Maybe we got carried away. I’m Jorge, by the way.”

“I’m Samuel…Sam. It’s good to be on a first-name basis with someone who shares my perv tendencies.”

“Nice to meet you, Sam. I gotta tell you that this reminds me of a game I played with my best friend in college, except she always had more to pick from than I did. I blame the damn bi-boys. My scores would’ve been higher if Anna hadn’t lured away so many.”

“So, Jorge, which is your number two fuck fantasy?”

We worked back and forth until we were down to the tenth spot on our list. I picked out my choice—an older man with salt-and-pepper hair that he tied into a ponytail most of the time and a dense beard I wanted to run my fingers through. With a flourish toward Jorge, I said, “Your turn.”

Jorge looked over the men at the site, but after a little while, he still hadn’t made his choice. The wait stretched out before he turned back wearing a sheepish smile, and to my surprise, he winked. The flutter of emotions it caused shocked me even more. Before I responded, he started talking.

His declaration made my stomach knot. I wanted to be somewhere else—anywhere else. The experience shook me to my core. I struggled to get up.

“Sorry. I’m terrible at compliments. I didn’t mean to upset you. I—”

I tried to think of a way to get out of this situation before he said more. I didn’t want to deal with being asked out, hopes building, in bed together—then he realized there were parts of me missing. That’s a routine I’m not interested in going through again. No way. It’s better to be alone. I struggled to stand, ready to be back in the lab. My frustration mounted when I had difficulty finding my balance. My prosthetic had decided my escape should be awkward and embarrassing. Jorge moved toward me.

My annoyance grew and came out in a nasty explosion. “I don’t need any fucking help. I’ve taken care of my damn self since my leg got blown to a thousand hunks of meat.” I regretted the outburst as soon as it had left my lips, but once again my mouth had overpowered my brain.

Jorge took a step away. “Sorry, man. I didn’t mean to insult you. I guess I should go. It was good to meet you.”

I’d fucked up again and had no eloquent words to get me out of this mess. Before I could apologize, he’d traveled halfway across the plaza. With a sigh, I tried to stand again, and I found my balance on my first attempt.

Jon Keys’ earliest memories revolve around books; with the first ones he can recall reading himself being “The Warlord of Mars” and anything with Tarzan. (The local library wasn’t particularly up to date.) But as puberty set in, he started sneaking his mother’s romance magazines and added the world of romance and erotica to his mix of science fiction, fantasy, Native American, westerns and comic books.

A voracious reader for almost half a century, Jon has only recently begun creating his own flights of fiction for the entertainment of others. Born in the Southwest and now living in the Midwest, Jon has worked as a ranch hand, teacher, computer tech, roughneck, designer, retail clerk, welder, artist, and, yes, pool boy; with interests ranging from kayaking and hunting to painting and cooking, he draws from a wide range of life experiences to create written works that draw the reader in and wrap them in a good story.

I loved the author's attention to detail about Sam's job as a hospital lab tech. My mom got sick when I was 10 so I've seen many blood tests/IVs in 34 yrs & as a hard stick I've certainly seen our...

Share what you thought about Construction and earn reward points.