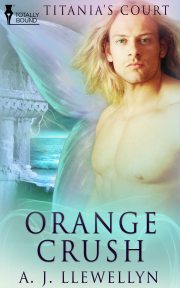 In this sequel to the Oberon's Court Winter Fae story, Sex and Candy, Orly the Moon Fairy has lived the life of a banished outlaw in the Forest of the Lost on the outskirts of Queen Titania's Seelie Court for twelve years. Exiled by his family for being gay, he has forged an existence among other ejected denizens of Fairyland, including his sexy lover, the moon god named Mên.

Everything is perfect until Orly's mother Lunette arrives, insisting that Orly come home for the Summer Fae Festival. His cousin Jing is due to marry the fairy prince William during the festivities and the invitation demands that all family members to be present. He has no desire to go, but is forced to do so when she threatens to formally request to have his wings clipped.

A funny thing happens on that hot, magical summer's day in the hidden treasures of the queen's sumptuous ball. Orly finds that love conquers all when he finds acceptance and, most of all, the importance of orange crush…

"You’re a fairy," Orly’s mother said. "You can’t possibly have phobias. I’ve never heard of such a thing."

"But you have to come, you have to!" His mother, Lunette, whom he’d long ago thought of only by her first name, paced the small bungalow. He’d carefully carved this sanctuary into a walnut tree in the vast wilderness of Mrs Wilmott’s acres of marsh. He’d been safe here for twelve blissful years...

Until five minutes ago.

"I don’t have to do anything," he said. It might have been technically true, but he sensed she wasn’t about to turn on her heel and leave him in peace.

How had she found him? And more to the point, why?

Lunette had been so adamant that he was no longer welcome in his family home after she’d discovered he was gay and had banished him from the life to which he’d become accustomed. Being part of the spectacular court of Titania, Queen of the Fairies, had been his world, his obsession. He’d been forced to learn to live without sparkly things and a certain amount of magic.

It had taken a long, long time.

And now his mother wanted to give it all back to him.

He was highly suspicious by nature. Living as an outlaw did that to a fairy, but he just knew that Lunette hadn’t come looking for him because she missed Orly. She had plenty of other children to keep her busy, plus her husband and—he’d been told—a lover or two.

No, she didn’t need Orly.

He saw her wince. He felt like flinching, too. He didn’t like his private world being invaded this way. His little hideaway tucked in the forest bordering the mystic, but not always merry, Fairyland had been his refuge. He’d woken up half an hour ago to the song of the thrush, the exciting tingle of approaching summer on the air. He’d believed it would be a glorious day.

And then Lunette had appeared. He had the sneaking suspicion that all that had now changed and he dreaded whatever his mother had to say.

Orly loved his life. He was grateful to Mrs Wilmott, the old lady who was so barmy she never set foot outside of her home—thus, she had no idea that her property had become a haven for half the misfits seeking refuge from Queen Titania and her snobby Seelie Court.

He couldn’t figure out which of his friends had snitched, but he would do so as soon as he shoved his mother out the door. And the big blabbermouth would pay.

When he reacted to neither Lunette’s gnashing tears nor her words, she reached into her sleeve and extracted a piece of opalescent parchment and slid it across his workbench until it touched his elbow.

He barely stifled a gasp.

He hadn’t seen one of these in...aeons. The memories of his former, privileged life cut deeply.

Could he resist the allure of fairy dust and moonlight pixie kisses? No. He heaved an inward sigh. He never had. His family was part of the Twilight Fairy Realm and he had missed flying with his friends, having fun, causing havoc and sometimes, inadvertently, causing good.

That had been another of his problems. He liked helping others, especially Fairies with fading powers, but that had been frowned upon by the Fae. Orly had a role but he’d refused to adhere to his gothic label. He sighed and picked up the summons as Lunette poked through his kitchen, her nose twitching.

It was a beautiful order, he had to admit. Tailor-made to his family’s nature, it was almost invisible in the morning light. At night, its true colours would glow and the text would be especially striking.

He could read it very well, however.

His eyes were still young.

Share what you thought about Orange Crush and earn reward points.

Hi there, my name is A.J. Llewellyn and I’m addicted to fairies.
Yes, I am. Ever since I was a kid I’ve been obsessed with them. I have countless books about them and a sizable collection of fairies ranging in height, size, and um, beauty. I have skinny ones, fat ones, even a drunken one, but more about that in a moment.