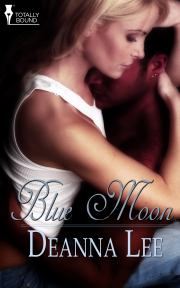 Ghostly love and lust bring them together… but will it be enough?

Tuesday Grayson owns the Blue Moon Inn which she inherited from her aunt. The Blue Moon Inn is a well-known haunted house, and over the years, many people have come to the inn with the express purpose of seeing the Ghost Dancers.

Ben Summers, a popular writer, is seeking information on the disappearance of his great uncle. He believes his ancestor is the male ghost that haunts the Blue Moon Inn.

The attraction between Tuesday and Ben is instant and inescapable. Fuelled by the passions of long-dead lovers and their own attraction, they fall into an intense sexual affair that leaves them both breathless.

Deanna Lee currently lives in the southern United States with her husband and two spoiled rotten dogs. As a reader, she loves suspense, mysteries, and historicals. As a writer, it is her goal to entertain and to share her love of the written word with as many people as possible.

Share what you thought about Blue Moon and earn reward points.