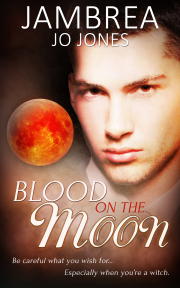 Blood on the Moon

Be careful what you wish for, especially when you’re a witch.

Montague Ramey wanted something to happen in his life. He thought when he found out he was a witch that his life would become more exciting, but it was the same thing every day. His coven was nice and boring, as was his job with the television station anchoring the news. The only excitement he got was going to the local bar, but there weren’t very many men who wanted to play. That was, until the moon turned red and his life changed.

After Kishar Nichelson’s motorcycle stalled on the highway with no traffic in sight, he stumbled into a small town around midnight, the red moon guiding his way. On the run and weak, Kishar needed to figure out where he was and who was after him before lack of sex killed him.

Can a witch and an incubus solve the mystery before one of them dies? The blood on the moon wasn’t the only thing they had to worry about. Meddling family, close calls with death and a missing witch are enough to keep anyone busy, but can Kishar and Montague still find time for love?

Publisher's Note: This book has been previously released as part of the Unconventional in San Diego anthology by Pride Publishing.

Montague Ramey left the bar Unconventional after beating his friend Ivan Brusilov in a game of pool. He had no idea why he put up with the unicorn. Ivan persisted on calling him Monty no matter how many times Montague insisted that was not his name. Of course, he’d have no excitement if he didn’t have Ivan in his life. Playing pool with his friend was about all the excitement he’d have that week. Maybe he should have had another glass of wine before he left for home. It wasn’t like he was driving. And his house wasn’t that far from the bar. No matter, he had a bottle at home he could dip into. He didn’t have to work at the television station on Saturday. It was his weekend to…do nothing.

God, his life was boring.

It was midnight, the witching hour. He laughed at himself. His coven probably wouldn’t find it funny, but it was made up of a bunch of older ladies who were set in their ways. It was the only coven around, so he made do. His adoptive parents, being fully human, had done what they could to embrace his magical powers. It had come as a surprise when puberty had hit and his body had gone crazy. His parents had searched for a coven close to home, and when they’d found the group of older women, the coven had been happy to take him on as a prodigy.

Once he’d been accepted, his parents had moved to be even closer so he could seek assistance when he had questions about his powers. Puberty was a bitch, and he’d needed the help.

Montague had been fresh blood for the coven, who all had daughters and granddaughters they wanted to marry off to a magical being. It was a small community and they were happy to have him. At first, it had done nothing for his social life—he was introduced to the eligible women—but once the coven had found out he was gay, they’d started looking for a good man for him.

Luckily, there weren’t many gay men around for them to throw his way. He’d joined when he was fifteen, so that could have been very embarrassing and traumatized him for life. They meant well. He knew that.

After his parents died, Montague had taken over the cottage he’d grown up in. It settled his soul, being in the home his mom and dad had loved so much. Sometimes he could feel them surrounding him. One of the perks of being magical.

Montague looked up at the moon and stopped walking. Blood on the moon. That was bad. Very, very bad. Something was about to happen and it wasn’t going to be good. The hair on the back of his neck stood on end. Montague needed to get home—he’d rather read about the results of the blood moon than be involved in it. He was up for adventure, but he wasn’t crazy. He hurried his pace, making sure to keep an eye on his surroundings.

The best thing for a witch to do was batten down the hatches and wait the night out. Maybe put out some protective spells or something to keep the bad away from them. Being magical drew the attention of the universe, be it good or bad. He should contact the others in his coven, but right now he needed the safety of his home. His coven was probably all asleep by now anyway, so he’d check in tomorrow to make sure they were okay.

Montague all but ran to his little cottage, wasting no more time being outside than he had to. He fumbled with the keys. He would blame it on the drink even if he hadn’t had much—it was more fear than anything else. He’d lost his adoptive parents on a night with a blood moon. His heart ached thinking about not being able to help them on the day they’d died.

It’s an insta love/lust/meant to be story but the author pulled it all together well because the characters were likable and I wanted them to get their HEA.

Share what you thought about Blood on the Moon and earn reward points.