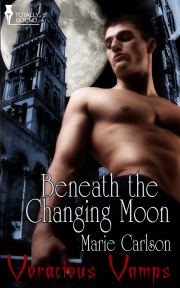 Beneath the Changing Moon

Amalia has always loved the way Darren challenged her with his friendship, but as he seduces her romantically and sexually, she knows eventually she will given in to what he truly wants and what is forbidden: the exchange of their blood.

In a world where vampires have almost died out, procreation is the responsibility of every fertile vampire. For Amalia Vallen, infertility is a curse. Not because she's failing her society but because Darren Lin, the man she's loved since they were children, is fertile.

Amalia fears their society - and, worse, Darren's family - will reject their bonding because she can bear no vampire children. To Darren, it doesn't matter; all he wants is Amalia's love. As Amalia struggles to overcome the biases she's internalised, Darren seduces her into romance, sex, and the most important vampire ritual, sharing blood.

Marie Carlson lives in the middle of America and spends her nights writing paranormal romance, watching the movement of the constellations, and searching the world for werewolf stories.

You can also find Marie at her blog.

Share what you thought about Beneath the Changing Moon and earn reward points.