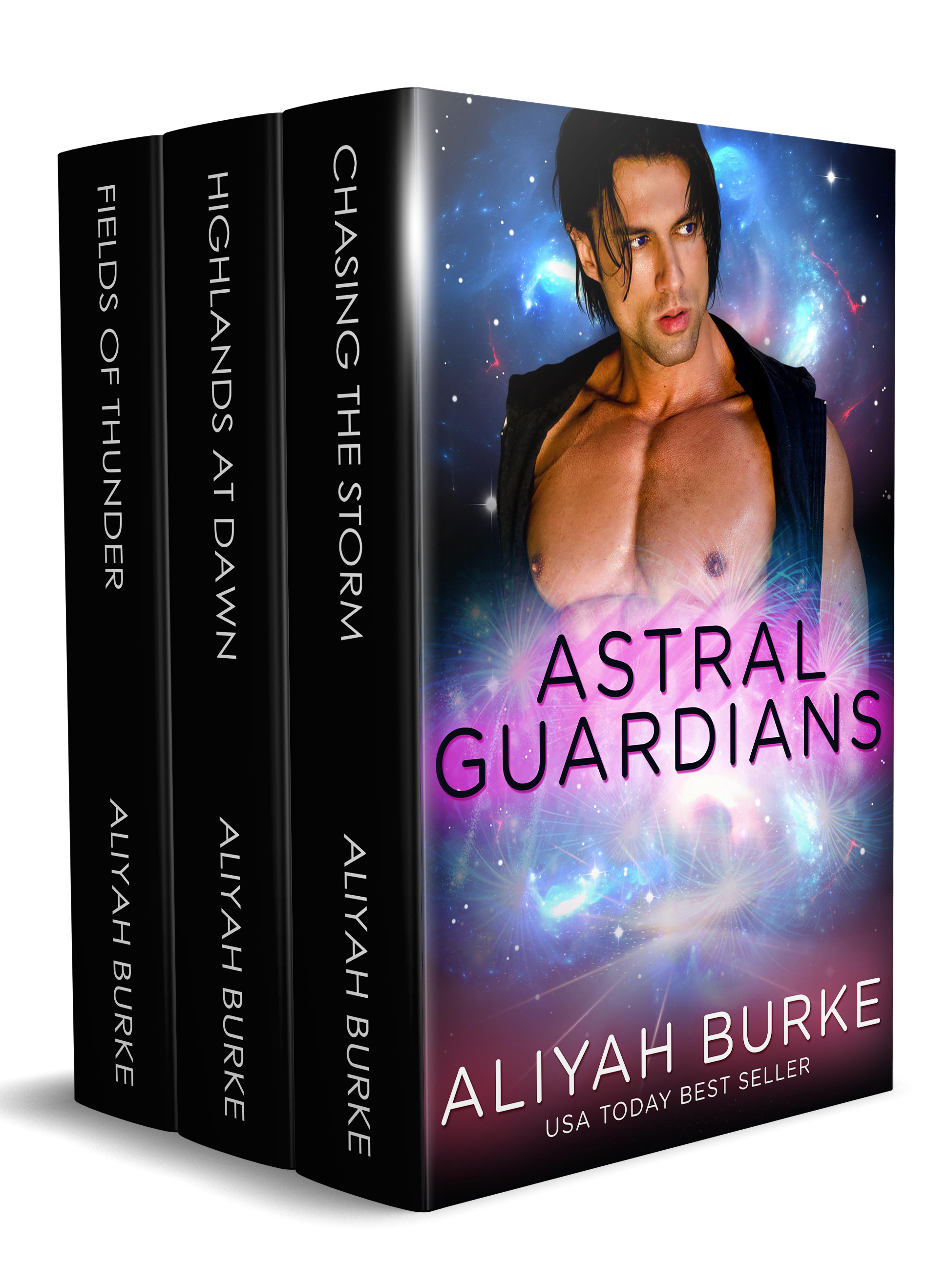 Sometimes all you get is a tiny flash…

Cale Mattox is the first of the Astral Guardians to find his artefact. The woman who wears it has her own past she’s running from.

Taylor Kenyon is tired—the family who wants her dead is beginning to gain on her. This man, Cale, gives her a sense of comfort she’s never had before and creates feelings no one else has. Together they will fight the approaching darkness.

Can he protect her as well as convince her that he needs more than just the artefact?

If you listen you will hear the heartbeat of the Earth…

Roz Hill is a woman unafraid of her passion. So when she meets a man who gives her a visceral reaction, she doesn’t ignore it. One night leads to more… The discovery of her mate and finding her artifact.

Altair Sagal has his own code. Roz intrigues him in ways no one has for years. As they learn to be mates, they get tossed into situations that very well may kill them both before their life together even begins.

Reader Advisory: These books contain scenes of torture and violence. These books are related to the Keeper of the Stars serial.

The cold winds bit into Cale’s skin as he careened down the mountain, barely missing the trees as they whipped by him. He loved it, the freedom of skiing. Above him, he spied the silhouette of the chopper that had dropped him off higher than the tree line. Just how he liked it. Cale loved utilising a chopper to carry him high up into the mountains—it assisted his adrenaline rush when he raced back down to the base. Seeing it as it flew away made him realise even more just how alone he was up here. He wouldn’t have it any other way.

Some may prefer to vacation along the beaches and soak up the rays beside women wearing next to nothing. Personally, he liked the snow, and women who wanted to do something other than tan and have people deliver them drinks.

Which could very well explain why he didn’t have a girlfriend. He zigged and zagged around the trees, waiting until the last moment to change direction, cutting it as close as possible.

He was tired by the time he made it back down the mountain. In a good way, but tired. Skis in hand, he slowly strolled to the lodge, smoke rolling from its stacks reminding him how warm it would be inside. He put his things away then headed back down to the main floor where he went to the bar. Drink order in, he waited and looked about the room.

There were two men in one corner who had him immediately suspicious. He was typically very easy going, but there was something about them that had him watching them with much more caution. They wore the correct things yet they still didn’t fit. He knew they were full humans and not demons, or the like which carried the rank scent of sulphur. His drink arrived and he promptly put them out of his mind.

In a chair by the window, he stared out over the slopes and smiled. This was his last day of vacation and he had every intention of enjoying himself. And he held true to that. By the time he boarded his plane a day later, he was exhausted and looking forward to the long flight so he could get some rest.

Those same two men boarded and walked past him. He didn’t like the warning ripples that exploded out from him. His instincts weren’t wrong about people, and not ignoring them had been his reason for survival more often than not as a teen. He wasn’t about to ignore his instincts now, either. Acting as if he needed something from his bag, he located where they were and memorised their looks. He again took his seat and closed his eyes, but he was as alert as he’d ever been.

The sound of his foster sister in his head calmed him instantly. “How do you manage to feel everything we do, Dracen?”

A light chuckle echoed in his mind. “Thankfully it’s not everything, but you’re seriously on edge. Where are you?”

“Flying home. Where are you? Hot date?”

“Except you.” A fact that worried him. Dracen, of all his siblings, seemed to sleep the least. Especially recently. There’d been dark circles beneath her eyes last he’d seen her and he would bet anything that hadn’t changed in the time he’d been gone.

“Obviously not me if I’m talking to you. Now tell me why you’re nervous.”

“There were two men at the lodge who didn’t fit and now they’re on the plane with me. I can’t explain why I feel it, I just do.”

“You never have to explain it, Cale. We all understand.”

“I will be just fine, Dracen. Don’t worry. You need to get some sleep. Or do I have to tell on you?”

“We’re no longer teens, Cale. Tattling won’t have any effect.”

He smirked and crossed his arms. “It will if I tell Tiarnán.”

Tiarnán was the eldest of the foster children who’d been taken in by Lian Yang who had stayed. Throughout the decades, Lian had sheltered many. Most of those had left when they reached eighteen or twenty. Of those currently there now, even ones who’d stayed past eighteen, he and Dracen had been there the longest, while Cale had been there seven years, arriving at age fourteen. Full of anger, mistrust and suspicion. It had been bumpy for a while but soon, something had clicked in his head and he’d realised this man, Lian, was different from everyone else he’d been sent to.

They were his family now.

The connection broke. It was odd to him, being able to talk with his siblings this way. He couldn’t do it other than with the other five who were different, like him. They were a unique bunch, whom Lian said had bigger challenges ahead. For the moment, there were only six of them who’d stayed after becoming of legal age. There were plenty of younger children, who they all chipped in helping with, but none older than eighteen except him and his five that he could communicate telepathically with whenever he wished.

He smiled at the airline attendant when she served him his food. Thankfully there was no one seated in his row, so he took the seat by the window and angled himself to where he could see behind him more. He wasn’t about to be caught off guard.

Cale ate slowly, watching the attendants move back and forth making sure everyone was looked after. One woman stopped before him and he didn’t realise he was staring until she cleared her throat.

“Can I get you something else to drink?”

Lord, she was pretty thing. “Coke please. With ice.”

She flashed a grin. “Right away.”

He could see himself spending some nights with her. With another flirtatious smile, he took his drink then watched her walk away. Nice legs. Another woman, a passenger this time, walked by and he couldn’t even begin to explain the punch to his gut that happened. As if all air had been sucked from his lungs, he bent over with a wheeze.

She barely paused, just flicked a glance at him. Then she frowned and stepped closer. “Are you okay?” Her voice was low and melodic.

“Choked on my drink,” he managed to say once he’d got some air back in his lungs. “Went down wrong.”

Her smile lit up her face and he found himself returning it. “I’m sorry. Glad you’re feeling better.” She leant forward a bit and her necklace fell free from her shirt.

He was riveted on the pendant. Gold, elegant in a way he’d never seen before. The symbol on it was one he’d seen before but couldn’t quite place. Everything within him wanted to yank it off her and keep it for himself. Keep it next to him, against his own flesh. His back burned and he shifted in his seat.

Share what you thought about Astral Guardians: Part One Box Set and earn reward points.