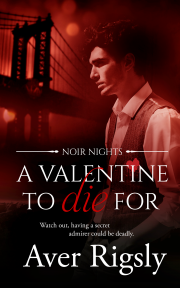 A Valentine to Die For

Book 1 in the Noir Nights series

Having a secret admirer can be deadly.

Ricky Morris, private investigator on New York’s elite Upper East Side, has forged a shady yet profitable life as a gumshoe for wealthy Manhattanites after burning the bridge to his law enforcement past. When women in the city are targeted by a sweet-toothed murderer in the week leading up to Valentine’s Day, the last thing Ricky expects is to be hired by the younger brother of the man who ruined his life.

Timothy Ward, young, fresh patrolman for the N.Y.P.D. who never thought he’d have to step outside the law, finds himself in desperate need of Ricky’s help when he fears his brother, James Ward, the Deputy Chief, could be behind the killing spree.

With Valentine’s Day fast approaching, both men will have to work in the shadows, putting their careers and lives on the line to get to the bottom of the murderer’s sickly sweet and cruel plans. That is, if the burning heat of undeniable—and very forbidden—lust between them doesn’t consume them in the flames of reckless desire first…

Reader advisory: This book contains period-typical attitudes including slurs. There are mentions of on-page gunplay, and a slow-burn between the main characters over the course of the series.

“Mrs. Banks…this is going to be hard to hear.”

“What exactly are you telling me, Mr. Morris?”

Ricky’s head was pounding, right behind his eyes and down the back of his neck. A full-blown shit-show of a hangover. He took a last puff of his cigarette and smooshed the butt of it out in the ashtray.

“I knew it,” she snapped, her ruby-painted lips pursed tight. “I just knew it.”

“Unfortunately, I have photo evidence here of your husband, on multiple occasions, visiting, let’s say…some of the less savory parts of the city, ma’am.”

He reached into the top drawer of his desk, plucked out a glossy photograph and slid it across for Mrs. Banks to inspect.

“Actually, there are three different broads here.” He pulled out a couple more photos, a short stack of four-by-five gelatin silver prints that he had developed himself in his makeshift darkroom. He laid the photos out, candid shots of Mr. Banks in his snazzy Buick Roadmaster, ladies hanging in through the passenger-side window, sitting beside him in the car, kissing the side of Mr. Banks’ thick neck—and those were just the photos that were considered decent compared to the others processing down the hall.

“I should have goddamn known. Theo is a fucking pig and always has been.”

Ricky raised his eyebrows but kept his cool, nodding to make her feel better. That was just Mrs. Banks—that sharp tongue of hers was very unladylike, no matter how expensive her silk pantyhose and real mink coat were, or how many strands of pearls she looped over her hand-tailored housedress.

Regardless, she wasn’t wrong about Mr. Banks. Ricky had spent the last week tailing Theodore Banks around the Financial District. Theo was a man who knew how to make dough. A pencil-pushing broker, Banks was the perfect example of a man whose money didn’t buy happiness. His wife was half his age—a stunning doll in her own right—and Ricky had noticed the moment they’d met how well she presented herself. She was a real looker of a dame, but Theo had a wandering eye and a penchant for not keeping his prick in his pants.

It was sort of pathetic how easy it had been to track him down and snap the photos of him getting a messy blow job in the front seat of his Buick. The fella had hardly lasted more than five minutes. Ricky did not envy Mrs. Banks, the poor woman, considering what she must deal with in the marital bed.

“What the hell am I supposed to do now?” she asked, digging into her handbag and rummaging around before pulling out a sleek chrome cigarette case. She popped the clasp and pulled out a menthol from the red velvet-lined inside. Her hands were shaking.

“Here, let me.” Ricky stood and leaned over the desk, offering her a light from his silver Zippo. Her red lips wrapped around the end of the cigarette and smoke curled up as she took the first few puffs.

“Of course, and, Mrs. Banks? As for the…delicate predicament you find yourself in…”

“As I see it, your best course of action would be to pursue a legal divorce.”

“That would be what I would do in your position, ma’am. You’ve suffered long and hard from a husband who is not only an adulterer, but who has also been recklessly spending your household income on lewd, and may I add, illegal activities.”

“Well, yes. Who knows how much money he’s thrown away on those filthy prostitutes?”

“Exactly, ma’am. May I ask, Mrs. Banks, is your name also on all your husband’s accounts?”

“Well, I'm certain that if you ask a bank teller to show you all withdrawal statements for the past few months, you will see quite a bit of cash being removed. I could even give you the dates that all these photographs were taken, which I suspect would match the same dates of the withdrawals. On top of that,” Ricky said, hardly feeling the pounding headache as he played his role of charming confidant, “while these photos here might be argued against and possibly dismissed by the right defender in a court of law, I have in my possession downright illicit photographs that would be impossible to sweep under the rug. The more proof of the wrongdoing built against the accused, the better chance the court will grant you a larger portion of your husband’s estate.”

“Is that so?” Her cigarette smoldered forgotten between her fingers, her hands no longer shaking.

“Yes, indeed. Between the photos I have and any bank statements showing the frivolous spending, you could make out with quite a pretty penny, Mrs. Banks. More than enough, I’d say, to keep a lady such as yourself very comfortable.”

“At least until I find a second husband,” she quipped. “I can’t help but notice that you aren’t wearing a wedding band, Mr. Morris. Are you single? Or maybe that quiet blonde girl at the door is your girlfriend?”

“You mean Liz? No, she’s just my secretary and close friend. And I have never been interested in marriage. I’m a simple bachelor and I enjoy it that way.”

“Such a shame,” she said. “So, what do I owe you? For your services, and for those other photographs you mentioned. I would very much like to purchase those as well.”

“In my line of work as a private investigator, I am often the bearer of bad news, and I feel terrible for your hardship, ma’am, so I’ll give you a courtesy discount. It would be my honor. How about we call it…eight hundred and fifty for everything, and I’ll be happy to have done business with you, Mrs. Banks.”

“Do you accept traveler’s checks?”

“Splendid.” She dug around in her handbag again, and Ricky leaned back in his chair. He lit a new cigarette, pleased with himself. Tonight, he was going to order a juicy steak dinner with all the fixings and a hefty glass of whiskey to go along with it. Jobs like these were perfect for milking desperate housewives. Show them a few pictures of their sleazy asshole husbands, and they turned to putty in his hands. Gold-diggers like Mrs. Banks were the best kind of all—all too eager to spend their husband’s money.

She handed over the checks, almost nine-hundred-bucks’ worth, and Ricky tucked them safely into his desk drawer.

“Much thanks indeed, ma’am.”

“Thank you, Mr. Morris. I will be sure to mention your name if any of my friends need similar help.”

“That’s all I can ask for, ma’am. You know where to send them. My door is always open to those in need.”

If they had the green for it. Simple as that.

Aver Rigsly was born and raised in the Boston, Massachusetts area and spends her days working at a travel agency in Quincy. Some of her favourite places to visit are Washington D.C., Bangor, Maine, and most of all New York City. When she isn’t working a trip or writing LGBTQA+ romance obsessively, she spends her free time relaxing with knitting, needlepoint, video games, or marathoning horror movies with the family.

Share what you thought about A Valentine to Die For and earn reward points.