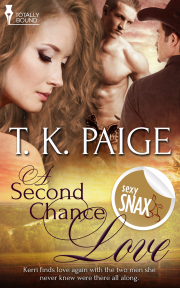 Years after losing her husband, Kerri Johnston is surprised to find love again with the two men she never knew were there all along.

Two years ago when Kerri Johnston buried her husband Caleb after a tragic car accident, his best friends Kyle and Jacob came to her rescue. Taking her back to their ranch with them, they gave her a fresh start and a friendship she desperately needed. But after her grief fades Kerri realises her feelings for her two friends have changed and friendship isn’t enough.

While Kerri knows that Jacob and Kyle play with women occasionally, she also knows that she could never live with being only a temporary fling to them. When Kerri makes the decision to leave because watching them from the outside is becoming too painful, she gets a surprise second chance at love. That is, if three people can work through the obstacles and misunderstandings that come with it…

“Did you tell them why you’re leaving, Kerri?” Rebecca, my best friend since eighth grade, looked at me with concern. Then she looked pointedly at the plane ticket I held clutched painfully in my hands. “You figured out how you felt about them and what? You bought a plane ticket to leave three days later and didn’t even tell them until the night before?” She actually grasped the sides of her computer worriedly, I guess since she couldn’t actually grab me. “This isn’t you, Kerri. Since when do you run? Why don’t you be honest with them? Don’t they deserve that much?”

“You want me to tell two of my closest friends, who are totally in love with each other, that I am leaving because I can’t take being in the same house with them anymore?” I glared at my computer screen. Sometimes there were drawbacks to Skype—like my best friend, who was over eight hundred miles away, could still read my face so well I couldn’t get away with shit. “No, I didn’t tell them. They would be upset and I can’t take it anymore. It was different when I was just attracted to them. Or when I was at least lying to myself about that being all there was.”

I sighed to myself. Jacob and Kyle had looked so worried about me, and they’d tried so hard to convince me to stay. “I just told them that Caleb has been gone for over two years now, and I need to find a life of my own. It’s the truth, Becs. I still miss him every day, but I want to find someone to love me again. I’m tired of sleeping alone. I am tired of being alone.”

“Kerri, you already have found someone to love and you know it!” Rebecca threw her hands in the air. With her short red hair, green eyes and petite build, she looked like a fuming leprechaun. “You are in love with Jacob and Kyle. What if they could feel the same way about you? You told me they used to have relationships with women before you moved in with them. So you know they enjoy being with women.”

“Yes, but it was only for a night or a few weeks at most… They have never hinted that they wanted anything long term.” I looked at Rebecca, fighting back tears. “I couldn’t be with them for only a week or two and then go back to being friends. And I can’t lose them. They are too much a part of me. They miss Caleb as much as I do.” And with that thought I realized why I was so afraid of reaching for what I wanted so badly.

My late husband had grown up with Jacob and Kyle. All three had lived in the same small Oklahoma farming town outside of Guthrie. They were all only children, and had grown up together as close and loving as any brothers could possibly be.

I confessed my real fear to her. “What if I tell them and I lose them? It’s not just them not loving me back, if I lose their friendship, I lose my last link to Caleb too.”

“Kerri, you love them, you need to try.” Rebecca looked at me earnestly. “If you don’t tell them, and you move away, they will be gone anyway. You will pull away from them because it hurts too much. If you tell them, you may still lose them, but it will at least be because of the truth. You won’t have to wonder ‘what if’ for the rest of your life,” she continued gently. “But no matter what happens, you will never lose your connection to Caleb.”

God, she was right. About Caleb. I knew that, but sometimes it made it so much easier to feel him when there was somebody who shared memories of him. Who loved him too. Kyle and Jacob could even share memories of him that I hadn’t heard. Sometimes, when they were telling stories, I swear I could hear Caleb’s booming laughter right along with ours.

And I was already pulling away from them. Staying in my room more and more because the sight of them curled up together while we watched TV made me feel so lonely. My eyes would spend more time on them than on the TV while I wished I was snuggled up with them. All the times that I saw them kiss made me ache so much that I hid more and more.

T.K. Paige picked up her first book to read around the age of four and hasn’t stopped since. She discovered the M/M genre in August of 2012 and an addict was hooked.

If you see her and she is not reading, then she is thinking about the books that live in her head. It doesn’t matter what else she is doing, it is guaranteed half her brain has a plot running through it.

A stay at home mom for more years than she would like to think about, she is lucky enough to be married to a wonderful guy who encouraged her to write throughout their years together. Then when she finally did it and she told him what she was writing, he turned only slightly green and asked “Do I have to read it?” Apparently, he had dreams of her being the next Urban Fantasy sensation with her taste in movies… We won’t tell him what she watches when she is alone all day folding laundry.

She would love to hear from readers through her email and Facebook page.

This was a quick sexy read that I couldn’t get enough of.  Even though it was a short quick read, I still enjoyed the characters, and of course the smuttiness, that was in the story.  I loved that...

There are a few surprising twists and a very satisfying ending. I will say one thing I really liked is that the ménage isn’t perfect. There is jealousy, and work at making it work. All the chara...

Share what you thought about A Second Chance Love and earn reward points.

Did you ever look around and wonder, “What am I doing here?”

That’s me right now. A little over a year ago I was a wife, mother and homemaker. If you asked me to describe myself I would’ve used those words first. Then followed it with, book addict, introvert, sci fi freak, closet romantic and daydreamer.

o celebrate the release of my second novella with Totally Bound, A Second Chance Love, I’ve decided to do my blog post on why I reached for my dream and how it has affected me.

Reading has always been my escape since I was four. I could go anywhere, be anyone and do anything when I was lost in a book. For me, that segued into daydreaming constantly whenever I had a few minutes. It could be about a book, a TV show or movie. While my sisters were complaining about the long drive to wherever, I was imagining Middle Earth or traveling the universe with a Time Lord.

And many times it was a something that only existed in my head.