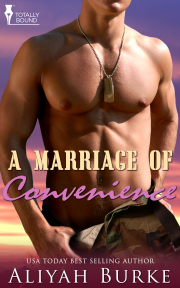 A Marriage of Convenience

Book 1 in the Code of Honour series

A Naval pilot, a one night stand and years later a second chance, can they make it work this time?

Pharmacological student, Ayanna Barker, was working hard to give her and her son a good life. Sure, things were tight, but it was all worth it. The man who had given her her child has also given her the best night of her life…and she had never forgotten him.

US Navy pilot Lieutenant Michael Taylor loved the rush his job gave him but even that took a back seat to how he felt about the lovely Ayanna Barker, but circumstances keep them apart.

Four years later Michael sees her at a different military institution. Ayanna is more beautiful than his vivid memories had recalled her to be, but now she has a child…she has his child. Determined to be a part of her life, and his son's, Michael moves them into his home and marries her. Each day reawakened emotions burn hotter and hotter as they try and keep things under control.

But can Michael and Ayanna realise what they share is so much more than just a marriage of convenience?

Publisher's Note: This story was released as part of the Camouflaged Hearts Anthology by Totally Bound Publishing.

Michael Taylor had been talking on his cell phone when he’d stepped into the busy beer tent line. A jostle from behind had almost shoved him into the woman in front of him. His hand had swiped across the bottom of her back and in that second, everything else had faded away. Electrical currents had showered him. The second her soulful brown eyes had landed on his, it was as if he’d just hit mach one in his jet.

What the hell am I thinking? I don’t know this woman, but damn if I don’t want to.

She wore a purple open-backed shirt that perfectly offset the nutmeg hue of her skin and a pair of hip hugging black jeans. He saw sandals on her feet and if he moved his head just so, he could see the dark purple on her toenails.

While their physical connection was over almost immediately, the ardent impression still lingered between them. He wasn’t blind to the desire swirling in her eyes no matter how she tried to pretend indifference.

Paying for her beer along with his, it seemed only natural to settle his large palm against the smooth, dark skin of her back as they left the overcrowded beer tent.

He had no problem following her. The gentle scent on her skin reached out and wound around him, making him yearn for more of her. He craved to find out if her perfume was just around her neck or if the tempting smell went all the way to her feet.

When she stopped to allow a group of people to pass, he leaned forward and murmured, “Michael,” into her ear.

Her head turned, positioning her full tempting lips a hairsbreadth from his, and she whispered, “Ayanna.”

He kissed her. He had no choice. Her mouth had teased him as it formed her name and challenged him to sample her lips. She tasted divine.

The innocent kiss quickly evolved into something more. Michael hungered for all that this woman offered. He dominated the kiss, using his tongue to sweep throughout the recesses of her mouth.

His cock swelled and dug into her side as Michael plundered her mouth. He groaned his pleasure as the kiss lengthened.

The roar of jets in the sky rumbled around them and put a miniscule distance between their bodies as he struggled for restraint.

Ayanna’s lips were swollen from the force of their kiss.

“I want you,” he stated bluntly as he watched the rapid rise and fall of her chest. She ran her tongue over her lips.

“After the show.” Taking her hand, he led her to a vacant spot on the ground. They watched the show like any other couple, holding hands, exchanging kisses, and occasionally staring into each other’s eyes. As the park had begun to empty after the show, Michael kept one muscled arm around her, anchoring them together. They’d stopped at the entrance. Pressing her against the cool wall of a ticket booth, Michael ran his hands through her short hair. Strong legs settled on either side of her thin body, eliminating any means of escape.

5 out of 5! A Marriage of Convenience is another one of those stories that had me sighing. I just love the whole theme and storyline behind it. Ms. Burke is a very talented writer who adds complications...

I couldn't have asked for a better story � A Marriage of Convenience gets two thumbs up!

Share what you thought about A Marriage of Convenience and earn reward points.

Other books in the Code of Honour seriesView Series Page