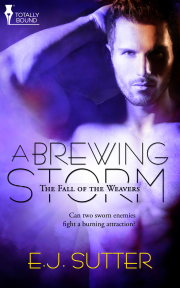 Book 1 in the The Fall of the Weavers series

The Shadow Worlds are dying. Can two sworn enemies manage to get past their differences and ignore their burning attraction to each other long enough to save them?

Brandon is a Weaver, a member of an old, powerful race. His discovery that Master Weavers are disappearing, presumed murdered, is a shock. Even more so when he realises that the person responsible is not actually a person at all, but a Revenant, and worse, the creature also known as the Abomination.

Things are not quite how they seem, however.

Jaime is a Revenant, a creature born from death and designed to do his Master's bidding. He's been living in the shadows for years. Now, the Shadow Worlds are dying, Weavers are disappearing, and Jamie is no longer the only Revenant to survive their Master.

Can these two men ignore the hatred, and the passion, that burns between them, and work together to find out just what is happening to the Universe around them?

They must uncover age old secrets of the Weavers, and defeat enemies who are closer to them than they'd realised.

Reader Advisory: This book contains scenes of non-consensual sex including the detailed account of a gang-rape, not intended for titillation, which some readers may find distressing.

The sky was clear, the stars crisp against the blue-black heavens. It made the approaching clouds seem closer than they were. The two men stood side by side and watched those stars circling overhead. They enjoyed their brightness and mourned their impending loss. Never again would anyone view those stars from quite this perspective. It was definitely a sobering thought, and one of the heavily robed men sighed deeply in acknowledgment of the impending loss.

"You know what they intend?" the taller of the two asked his companion, his tone measured, as though he didn’t want to voice the thoughts swirling in his head.

"I do," his companion replied, his face impassive.

"And you agree?" There was a hint of incredulity in the tone.

The other man laughed, millennia of experience in his voice. "Won’t work. They need to be in control, and they need to have control, otherwise nasty, visceral real stuff might get in the way. You know we don’t do that anymore."

The swirling clouds were closer now, and both men could just make out a mountain range some miles ahead of them. Wherever they touched, once they’d passed, the landscape was just…gone… The two men stood and watched as the clouds encroached upon the towering mountain range. Five minutes later, or maybe fifty, it was difficult to tell, they’d moved on. All that was left was… Well, an absence of light was what it was best described as, but it didn’t even come close to acknowledging the emptiness that followed. They left…nothing. They shifted their perspective, and all that could be seen was just a deep empty void crawling across what had once been a landscape, leaving a hollow in its wake, with nothing to speak of left behind. A deep ravine falling into the emptiness of space was all that was left from their touch.

"We can’t let our people die, Damian, but we can’t let them do this either."

"Do we have a choice?" Damian’s voice was helpless, somehow bereft.

"We do. Or I do. I won’t ask you to be a part of this, Damian. I just need to know you know why I’ll be doing this." There was a plea for understanding, and something more. A plea for forgiveness.

"I know." Damian’s voice was heavy with regret. "Brother, if I could…"

The other man laughed, his bitterness not quite hidden. "I know. You’d be there by my side." His glance slid sideways towards his companion. "But I won’t let them do this, not even to save our people. Especially not to save our people. No matter what it takes."

"I know, and, for what it’s worth, I agree." The leaden weight in the pronouncement silenced them, and they fixed their eyes on the horizon. The swirling mass was now close enough that both men could see that they seemed less like clouds and more like a growing, fetid bruise. The blue streaks were dull and old, and the purple streaks were mottled and dim. As they watched, poisonous streaks of yellow shot with black danced across the surface. They appeared almost sentient, a sense of malevolence emanating from them.

"We will die unless we do something," Damian remarked casually, as though the death of his race was something barely worth mentioning.

"Then we somehow do something else." His companion was adamant. "We don’t destroy a world, and we don’t just let a multitude of worlds die while we stand there and do nothing! We’re better than that, Damian. You know that!"

Damian huffed out a laugh. It was an obvious effort, and there was no humour present. "Are we? Aren’t we just like every other species facing its demise? We’ll do anything to survive. We have done anything to do more than just survive. So this is nothing to our people."

"Doesn’t mean it’s right. We must try to prevent this. You know it. So do I."

"I know." There was a beat, a pause, as both men viewed the approaching horizon again. "You attempt it first. I will try if you fail."

The other man laughed hollowly. "Always the politician, Damian. Fair enough. I will attempt to halt them. If I fail, and you do not try to stop them, I will haunt you." The threat wasn’t an idle one. Damian knew his companion was perfectly capable of being that vindictive.

The clouds grew closer—slowly, steadily closer. They were the end of everything, and they were getting closer every day. In a few hundred years, they would challenge even the Weavers’ seat of power.

And so the two men met in the death throes of one world to discuss the future of another. And in that meeting, deadly murder and mayhem were planned. All to save a world they had not even seen yet.

Sometimes it didn't really matter, he knew that. The decisions he made didn't really change anything. The difficult decisions were always the easiest. It was the little decisions, the daily choices that were the hardest. For Jamie, hiding in the shadows in a nameless alley, there was never any choice, never a decision to make. Don't do it. Don't get involved. I could wind up dead that way. Well, even more dead.

Now, for instance, there was a harassed-looking woman at the ATM opposite the alley. Jamie didn't feel anything for her, for anyone, but he had an intellectual understanding of morals, and he'd long ago decided to impose that code on himself. It was all that kept him from devolving into the animal so many thought he was. So he wouldn't rob her of the hard earned money she was withdrawing. The guy behind her, though? Well, he was fair game, thousand-dollar suit and all. Jamie briefly wondered why someone dressed that expensively was bothering with an ATM, but then decided he didn't really care. It was probably money for drugs. Jamie didn't know of many drug dealers who'd graduated to accepting AmEx. Cash was still the payment method of choice on the streets-all the more reason to take him down, in Jamie's opinion.

He shrank back farther in the alley's shadows, briefly wrinkling his nose at the smells that assaulted his heightened senses. He really needed to find better places to lurk, but the alley hid his 'unusual' appearance very well, especially with how he looked at the moment. The drunks who stumbled across him just thought he was a figment of their delirium, dismissing the eerie glow from his eyes as something caused by their cheap alcohol. It suited him.

E.J Sutter hails from the North West of the UK, specifically Liverpool. She currently lives in the wilds of Lancashire with two cats and two extremely stupid dogs. She has been scribbling ever since she was a child when, at the tender age of 7, she had a poem published in a local anthology. This led to a life long hatred of poetry, as she was then expected to be able to write it! In fact, she wrote the poem in about five minutes, as she'd wasted the whole of the lesson talking, and wasn't allowed out at playtime until she'd finished it.

Stories, however, have been tumbling out of her brain for as long as she can remember, but she's only just got around to putting them down on her laptop.

I read RJ Scott's review and thought that sounds like something I'd love to read, and boy did I ever!! 5 stars, and a huge shout out to RJ for her review!! The story is set in today's world but...

Share what you thought about A Brewing Storm and earn reward points.

To be honest, I was stuck in a holiday cottage in the snowy Highlands of Scotland one January, with no Internet or phone signal. I just sat at the laptop and started typing. I guess I’m dangerous when I’m bored. I can’t afford distractions, and need complete quiet, or my mind drifts. If I listen to music, I tend to find I’m typing the lyrics of the song I’m listening to before I know it…