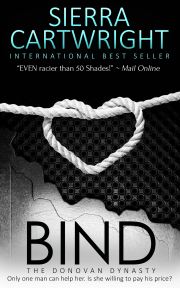 Share what you thought about Bind and earn reward points.

This is one of the most sensual and beautifully written books that I read in a loooong time and it's no surprise that Sierra has done it again !The sensual exploration if off the charts .. never before have I read the book and had a feeling that it was happening to me - while reading it. Once again we are reminded of the honesty and the terrifying truth of what a D/s relationship is. Sierra has managed the impossible - it can be harsh and romantic at the same time as it is captivating. in this case you can almost call it courting. And let me tell you - hands down the hottest spanking scene ever written. Even the legal talk about BDSM leaves you all tingly inside. I whole-heartedly recommended this book to all the romantics out there that are just dying for the touch of the single tail and the harsh slap of the spanking added to the mix. Sierra's got it all.

Bind grabbed me from the first page and left me wanting more. I had a hard time putting the book down. Lara is a woman on a mission and Connor is a man who knows what he wants. Throw in a marriage proposal of convenience and the heat begins to rise. I really enjoyed the story and the chemistry between the characters was very believable. The scenes were hit and very well written. There was even a surprise visit from another one of Sierra's great characters from a previous series. I highly recommend this new series from Sierra.

Bind was probably the best book I’ve read by Sierra Cartwright to date! The beginning was reminiscent of Fifty Shades, but more pleasing and less "shock and awe". The smattering of humor throughout did a great job of diffusing the intensity of the developing relationship. Lara and Connor were compelling, mature characters. Even though the sexual relationship was the main focus, it wasn't the only one. The glimpses of them in their work environments added to their well-roundedness. I didn't feel like he was taking unfair advantage of her predicament. They moved quickly, but he treated her as an equal and with respect. His reliability and trustworthiness were a core element of his personality and not just a selfish means to get laid. The BDSM parts were kept to introduction to the lifestyle and spanking, but the seduction and the sex were so incredibly hot!

A sexy and masterful start to a fantastic new series! This has to be Ms. Cartwright’s best work yet! Stimulating, sensual, and just a whole lot of fun, BIND is sure to keep you on your toes!

Bind has Sierra's trademark sexiness that'll leave you searching for a fan. The sexual chemistry between Connor and Lara is hot. It was their instant attraction that initially hooked my attention, but as I continued to read the story, it was the subtle blossoming romance that made me fall in love with the book. I love Sierra's work. Her writing is so very sexy, yet sweet at the same time. Sierra's characters are fantastic. Connor was a sexy addition to Sierra's collection of sizzling hot heroes. Lara had me in stitches more than once, especially with her addiction to a certain tub. Bind was such a fun introduction to the new series. I must admit that I giggled when Sierra "introduced" the connection between this series and her previous Bonds series. That was perfect! I know that the focus of the series is on the Donovan brothers, but I'm secretly hoping the Donovan sister gets her chance. She's a sneaky little devil...

It makes a refreshing change as both characters are very clever, independent and wealthy in their own rights.the female MC takes the lead and asks Connor to marry her as part of a deal to get a small portion of her dads company. Connor agrees, but has his own conditions, he's a Dom, and stipulates that yes he will marry her, but she is to become his sub. She's aware of the life style, but no first hand knowledge. Connor introduces her to the life style, and we become part of their developing relationship. I did enjoy this story, and love the books written by this author

A great start to a new series. Lara works for her fathers company, she is concerned because her father is neglecting his company and he won't listen to what she has to say. Lara decides to go and see Connor and she ends up proposing marriage to him. He agrees on one condition. To find out what happens you need to get the book!

A fantastic new series! I love the whole story between Connor and Lara, A business proposal turned love story! I think I have found my new book boyfriend, lol. This is a must read I recommend it to everyone!

What an incredible start to a luscious new series by Sierra Cartwright. Connor is simply scrumptious, he's authentic and fair, imaginative and compelling, and above all- completely alpha male. Enter Lara, a smart and savvy businesswoman who wants to save her fledgling family business. How you may ask? With a proposal that could change both hers and Connors lives. Connor knows that he has to bargain with the beautiful woman, and he knows exactly what he wants- her submission. The potent attraction between these two jump off the page and leaves you wanting more. I have loved all of Sierra Cartwright that I've read, but Bind has the possibility of being at the top of the list. It's sexy and smart, and I loved seeing some of her previous memorable characters. The pseudo-crossover series left me panting and with palpitations, and I'm excited to see what Connor's brothers have up their sleeves.
Showing Books 11 to 20 (of 29)